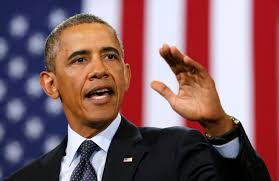 UNITED STATES – President Barack Obama said on Thursday that Donald Trump confirms his belief that the Republican is not qualified to be president “every time he speaks,” adding that he was confident Americans would ultimately reject the brash billionaire on Election Day.

Ending his final presidential trip to Asia, Obama said his meetings with foreign leaders during stops in China and Laos had illustrated that governing is “serious business” requiring knowledge, preparation and thought-out policies that can actually be implemented. He urged Americans not to allow the “outrageous behavior” seen amid the campaign-season din to become the new normal.

“The most important thing for the public and the press is to just listen to what he says and follow up and ask questions to what appear to be either contradictory or uninformed or outright wacky ideas,” Obama said.

Throughout the campaign, Obama has repeatedly denounced Trump and deemed him “unfit” to serve as commander in chief, while arguing that his controversial positions and comments are a step beyond what Republican nominees have embraced in the past. Obama has endorsed Hillary Clinton and has said he plans to campaign full-force for the Democrat before the Nov 8 election.

Obama’s remarks came at the end of a grueling nine-day trip that took him to Laos and China following US stops in Nevada, Hawaii and Midway Atoll in the Pacific Ocean. Obama said the United States and Southeast Asian nations gathered in Laos have advanced a vision of an open, competitive economic system in which all nations play by the same rules.