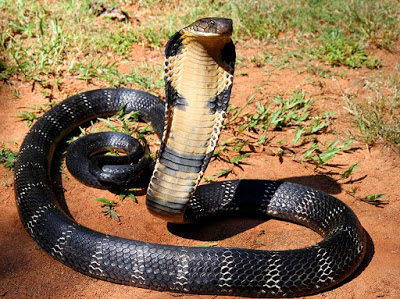 Bayelsa, Nigeria – Residents of Yenagoa, the Bayelsa state capital have been thrown into a state of confusion following cobra snakes’ invasion on their area.

The Nation reports that the sudden
appearances of the snakes have led some residents to flee their places
of abode as the reptiles have kept on with their invasion following the
consistent rainfalls and floods experienced in many parts of the
capital. Some of the affected residents at the Apex Academy road of
Amarata community on Imgbi road, also discovered a giant cobra over the
weekend and gathered to kill it, with one of the people simply
identified as Chidera explaining what transpired.

“The
man rushed to call some residents of the area to assist him. Some youths
gathered and killed the snake.” Speaking also was another resident,
Joshua‎, who noted that the rainfall is responsible for the
unprecedented presence of snakes in the community. According to him:
“Some weeks ago, I saw a huge snake at the back of my house in the
morning. Attempts to kill the cobra failed as it was ready to strike.”
Festus Ogienwon, a local snake expert has therefore appealed to
residents to watch their movements at night and counseled them to ensure
they close their doors tightly at night before going to bed.