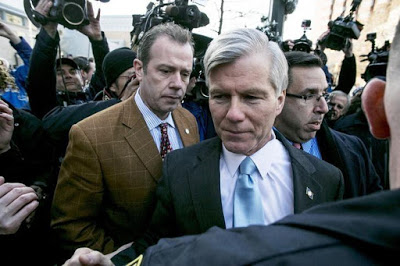 U.S. prosecutors on Thursday dropped corruption charges against former Virginia Governor Robert McDonnell and his wife, bringing to a close a case that tarnished the once-rising star of the Republican Party.

“After carefully considering the Supreme Court’s recent decision and the principles of federal prosecution, we have made the decision not to pursue the case further,” the U.S. Justice Department said in a statement.

In June, the U.S. Supreme Court threw out McDonnell’s bribery convictions in a ruling that could make it tougher to prosecute politicians for corruption.

The eight justices, liberals and conservatives alike, overturned McDonnell’s 2014 conviction, saying that his conduct fell short of an “official act” in exchange for a bribe as required for conviction under federal bribery law.

Jurors had convicted McDonnell for accepting $177,000 in luxury gifts and sweetheart loans to him and his wife Maureen McDonnell from a wealthy Richmond businessman seeking to promote a dietary supplement.

He was sentenced to two years in prison but remained free pending appeal.

The case was a rare instance of the nation’s highest court reviewing a high-level public official’s criminal conviction. The court sent the case back to lower courts to determine if there was sufficient evidence for a jury to convict McDonnell, which had kept alive the possibility of a new trial.

His lawyers applauded the decision, saying in a statement on Thursday: “Governor McDonnell can finally move on from the nightmare of the last three years and begin rebuilding his life.”

McDonnell served as governor from 2010 to 2014 and once was considered a possible U.S. vice presidential candidate. His wife was convicted in a separate trial and given a one-year sentence but remained free while pursuing a separate appeal.

The Supreme Court ruling effectively applied to Maureen McDonnell too, meaning that her conviction also had to be tossed out.

Her attorney said in a statement on Thursday: “We are thrilled and thankful that Maureen can now move on with her life.”

Legal observers have noted that the Supreme Court ruling opens the possibility that politicians could sell meetings and other forms of access without violating federal law.

The decision was criticized by Citizens for Responsibility and Ethics in Washington, a corruption watchdog group. It said in a statement the Justice Department had “sent a clear signal that it would not aggressively enforce corruption laws to hold public officials accountable when they abuse their office.”