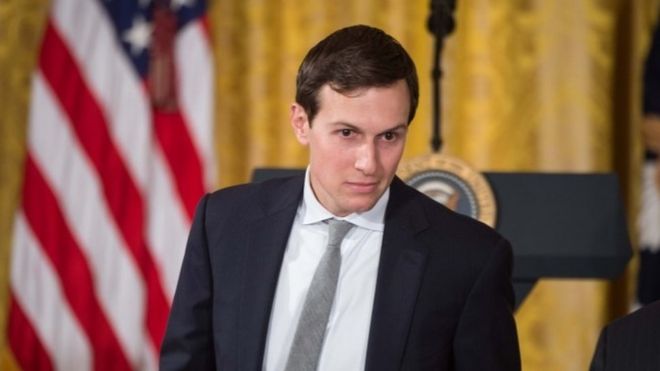 The US President Donald Trump’s son-in-law and aide, Jared Kushner, will be questioned by a US committee investigating alleged ties between the Trump team and Moscow.

Mr Kushner has volunteered to speak to the Senate Intelligence Committee, the White House said.
It is examining Russia’s alleged interference in last year’s election.

Russia denied the allegations and President Trump has branded the story “fake news”.

There are two congressional investigations into the issue, plus an FBI one.

Meanwhile, Democratic lawmakers have been calling for Republican Devin Nunes, the chairman of the House Intelligence Committee, to withdraw himself from all further investigations into possible links between the Trump team and Russia.

House Democratic leader Nancy Pelosi said he had discredited himself by secretly visiting the White House to review intelligence documents, before announcing he had information that Mr Trump and his advisers may have been subjected to incidental surveillance during the election.

Mr Nunes’ spokesman said he had visited the White House grounds as it was “a secure location where he could view the information provided by the source”.

However, Adam Schiff, the top Democrat on the intelligence committee, said the White House visit, which was kept from other committee members, showed Mr Nunes was too close to the Trump administration to “lead a credible investigation”.

But staff of Mr Kushner, who was a senior adviser to Mr Trump during the election campaign, have said that so far his offer to be questioned has not been answered.

White House spokesman Sean Spicer said Mr Kushner has not invoked executive privilege, and will testify because his job with the campaign was to be a “conduit to leaders”.

“That was his role and he wants to makes sure that he’s very clear about the role that he played, who he talked to, and that’s it,” Mr Spicer said on Monday. Read More from Source