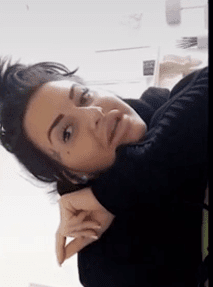 JEMMA Lucy was left “shaking” after airport security thought she was being sex trafficked because she was carrying a teddy.

The tattooed model, 28, was holding a cuddly toy of Simba from The Lion King when she was pulled over by security at Manchester airport.

Explaining on Snapchat that she was initially paranoid that she was being arrested for a criminal offence, she said: “The weirdest thing has just happened, I’m literally still shaking the border security thing, they literally just stopped me and said, ‘Wait a minute Jemma.’ 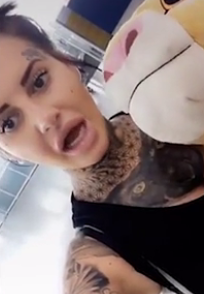 “Asking me questions about where I’ve been, who I am and all this s***, they won’t let me go through.

With her huge stuffed Simba still in shot, Jemma then revealed: “Turns out it’s all because I’ve got a teddy they thought I was being trafficked

“Like I was being bought over and trafficked as a slut. Not a slut, a prostitute or whatever.

“They thought I was being trafficked cause I had this. Why can’t I have a teddy?

“So my heart is still racing. I can’t believe it’s a sign of being trafficked.”

Later when she arrived home, the prolific Snapchatter was back on her phone.

Jemma asked: “Who you gonna sell me to first? Someone fit? How about I give you a list of the people?”

Then either having been informed of the horrors of sex trafficking, or realising herself that it’s no laughing matter, she said: “Joke over, I’m not making fun of people being trafficked as obviously it’s horrible but it’s just a funny situation that occurred because of a teddy bear.”