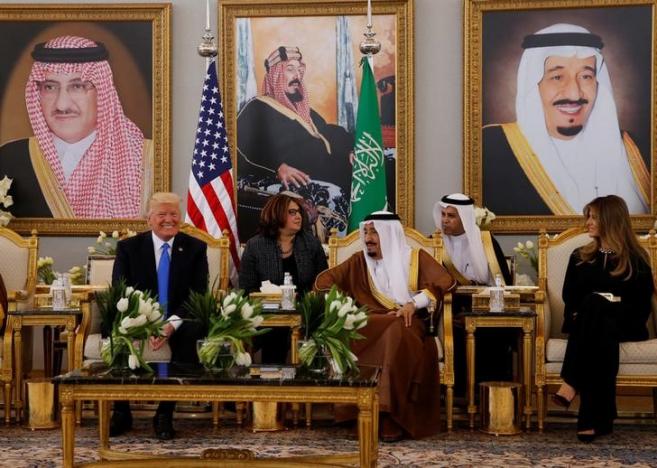 The United States President Donald Trump, under political fire at home sealed a $110 billion arms deal with Saudi Arabia on Saturday on his maiden foreign trip as he struggled to shift attention from the aftermath of his firing of the director of the FBI.

The arms deal, plus other investments that U.S. Secretary of State Rex Tillerson said could total up to $350 billion, was the central achievement of Trump’s first day in Riyadh, first stop on a nine-day journey through the Middle East and Europe.

Speaking to journalists after a ceremony to exchange agreements, Trump said it was a “tremendous day” and spoke of “hundreds of billions of dollars of investments into the United States and jobs, jobs, jobs. So I would like to thank all of the people of Saudi Arabia.”

King Salman gave Trump a remarkably warm greeting, meeting him at the steps of Air Force One on arrival, shaking the hand of Trump’s wife, Melania, riding with Trump in his limousine and spending most of the day with him.

But the political turmoil back in Washington consumed the headlines in the United States and cast a long shadow over the start of Trump’s trip, which will include stops in Israel, the Vatican, Italy and Belgium.

His firing of Federal Bureau of Investigation head James Comey on May 9 and the appointment of a special counsel to investigate Trump’s 2016 presidential election campaign ties to Russia have raised the question of whether he tried to squelch a probe into allegations of a Russian connection.

Fanning the flames was a New York Times report that Trump had called Comey a “nut job” in a private meeting last week in the Oval Office with Russian Foreign Minister Sergei Lavrov and ambassador Sergei Kislyak. The Times quoted briefing notes of the conversation.

Amid a mood of frustration, officials on board Trump’s Riyadh-bound presidential plane scrambled to coordinate on responding to the story with staff in Washington and those who had just landed in the Saudi capital.

Asked for a response, the White House said that for national security reasons, “we do not confirm or deny the authenticity of allegedly leaked classified documents.”

Russia’s Interfax news agency on Saturday quoted Lavrov as saying he had not discussed Comey with Trump. “We did not touch this issue at all,” the minister said.

In another development, the Washington Post said a White House official close to Trump was a significant “person of interest” in the investigation into possible ties with Russia. Continue to read from source