Kourtney Kardashian has not been seen with Scott Disick in two months. But the exes were spotted getting along just fine in Nantucket yesterday, according to TMZ. The source noted they looked to be on ‘good terms.’

The parents to Mason, seven, Penelope, five, and Reign, two, were side-by-side during a private lunch in a back room at upscale seafood restaurant CRU, which is located on the dock of a large harbor.

A source told the site they were not filming for her show Keeping Up With The Kardashians but were bonding again, most likely for the sake of the kids. ‘They were ushered to a private room in the back of the restaurant with a nanny in tow,’ the insider told the site. Photo below; 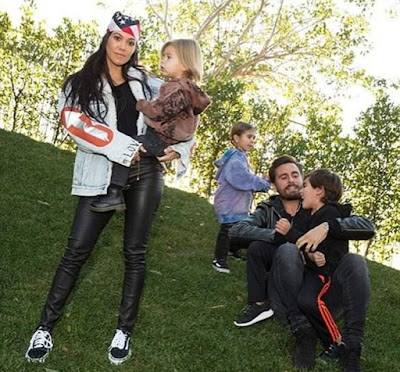 While Kourtney ‘appeared to be in good spirits’ as she took a selfie with a fan, Scott seemed more ‘reserved.’

The exes reportedly have a big fight in Cannes in May. Though they were in the French city separately, the beauty did not approve of Scott’s womanizing, it was claimed.