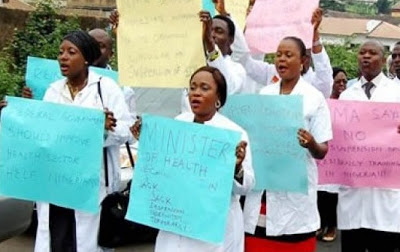 HEALTH – Federal health workers under the aegis of the Joint Health Sector Unions says it will on Tuesday (today) embark on an indefinite strike following the failure of the Federal Government to implement the agreement it reached with health workers last year.

JOHESU said this in a statement signed by its National Chairman, Biobelemoye Josiah; and its National Secretary, Florence Ekpebor, on Monday.

The union recalled that it called off its nationwide strike on September 30, 2017 after signing the memorandum of terms of settlement which was to be implemented within five weeks after the date of suspension of the strike.

JOHESU said it continued to remind the Federal Government of its promise and even gave a 30-day ultimatum which is expected to lapse on Tuesday (today).

The union said since the Federal Government seemed not to take health workers seriously, it had no choice but to embark on strike.