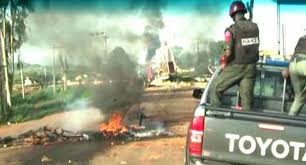 10 killed in fresh attacks in Plateau

10 killed in fresh attacks in Plateau

Barely a week after over 100 persons were gruesomely murdered by suspected herdsmen in Jos, Plateau state, new reports from the state say 10 persons were killed in renewed attacks in Mangu and Barkin Ladi communities in Jos, the state capital over the weekend.

Confirming the continuous killings despite the curfew and heavy military presence, the media officer of the task force, Major Adam Umar, in a statement, said that the security officers got a distress call at about 3am yesterday that armed bandits were attacking a home in Barkin Ladi. Sadly, four persons had been killed before they got to the scene of the attack.

“The OPSH notes with dismay the continued attitude of some criminals in the state that are bent on making the state ungovernable through some unwarranted attacks on some communities and innocent villagers despite the tireless efforts of the task force. We regret to say that about 0300 hours Sunday morning of 1st July, our men at Dorowa received a distress call from a resident of Mararaban Kantoma of Barkin Ladi Local Government that they were under attack by some armed bandits. On receiving the distress call, our men mobilised to the scene immediately to repel the attackers. The assailants who were given hot chase by our men escaped with various degrees of injuries while four of them were arrested.

“However, It is regrettable that before our men could get to the scene of the attack, four persons had already been killed by the attackers. Consequently, in its avowed commitment to ensuring that the renewed attacks are promptly brought to an end, the commander of the task force, Major General Anthony Atolagbe, has relocated the headquarters of the task force from Jos to Barkin Ladi. The Commander has also relocated with all his principal officers to the epicenter of the renewed attacks. To this end, the commander will be coordinating the day-to-day running of the task force from the new operational headquarters in Barkin Ladi.

“We wish to call on citizens of the state especially the residents of Barkin Ladi Local Government, to continue to have faith in the operations. We are fully on ground to continue to discharge our duties of protecting everybody in the state and we remain resolute to achieving our mandate in the state. We therefore use this opportunity to warn any criminal making or planning to make life miserable for innocent citizens to desist from the act forthwith.”