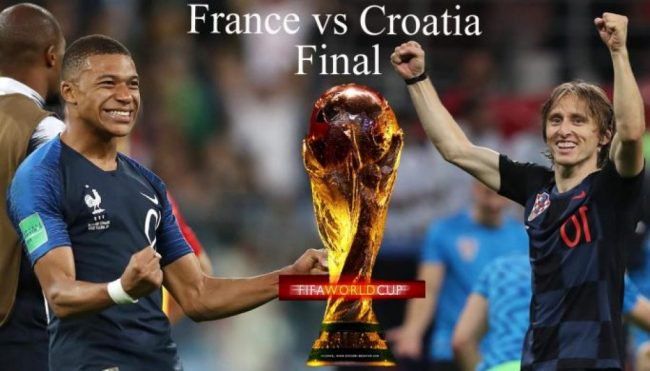 2018 World Cup Final – France will clash with Croatia in the 2018 World Cup final on Sunday at the Luzhniki Stadium in Moscow, Russia.

The Didier Deschamps’s men head into the game following a 1-0 victory against Belgium in the semi-final encounter played on Tuesday night, thanks to defender, Samuel Umtiti’s second half goal.

The Les Blues are bidding for their second World Cup crown after lifting the trophy in 1998 on home soil.

France have never lost in their five previous meetings against the Croats, winning three, including the most high-profile one, which came in the semi-finals of the 1998 World Cup.

Thuram scored twice in that match as France came from a goal down to win 2-1 en route to the trophy, and their only other meeting at a major tournament was a 2-2 draw at Euro 2004.

The two sides have only met once since that latter contest, and that ended in a goalless friendly stalemate at the Stade de France in March 2011.

The main injury doubts for France ahead of the clash is midfielder, Blaise Matuidi, who was forced off against Belgium following a collision with Eden Hazard.

Matuidi, however, is expected to start against Croatia after he was cleared of concussion.

France coach, Didier Deschamps could,, therefore name an unchanged side from the semi-final.

Deschamps is already on the verge of history as he bids to become only the third man after Mario Zagallo and Franz Beckenbauer to win the World Cup as both a player and a manager for France.

Meanwhile Croatia heads into the game after beating England 2-1 in the semi-final encounter played on Wednesday night.

Croatia coach, Zlatko Dalic has no new injuries worries in his squad ahead of the game.

Dalic is expected to feature an unchanged squad that started against the Three Lions.

Croatia captain, Luka Modrid will play in the midfield and will be assisted by Barcelona’s Ivan Rakitic and Inter Milan’s Marcelo Brozovic.

Juventus striker, Mario Mandzuki Perisic will lead the attack line for Dalic’s men and will be supported by Perisic, who was Croatia’s main danger man against England.

The kick off time for the match is 4pm.