Confederation of African Football(CAF), on Thursday, confirmed the appointment of Amaju Melvin Pinnick as the first Vice President of the football governing body.

Pinnick was recently ordered by the Supreme Court to comply with a lower court’s order that compelled him to vacate the office of President of the Nigeria Football Federation (NFF).

He is replacing Kwesi Nyatakyi who stepped down from the position, following an undercover investigation that indicted him for dropping the name of the Ghanaian President in shady deals. 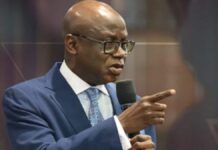