Azealia Banks slams K Michelle again, says she cancelled their joint tour ‘because her a** was rotting’

Controversial rapper, Azealia Banks is still not done beefing singer K Michelle over the cancelation of their 2015 joint tour.

Back in 2015, the pair were scheduled to run a joint tour from Sept. 15 to Oct. 15 with shows in New York, Los Angeles, Chicago and Atlanta, but Banks later announced that she got an email from Michelle’s team, saying she was now “unavailable.”

Following the cancelation, the rapper angrily called her out on Twitter and accused her of getting illegal butt shots in hotel rooms and being a “fake Christian h**.”

She wrote: ‘Finally realizing the reason kmichelle canceled our tour is because her ass was rotting. Or maybe I made her ass rot for canceling the tour. Hmm

‘I remember she made fun of me and called me broke because I was pressed about all the money I lost canceling the tour I had previously booked to tour with her,’ she added. 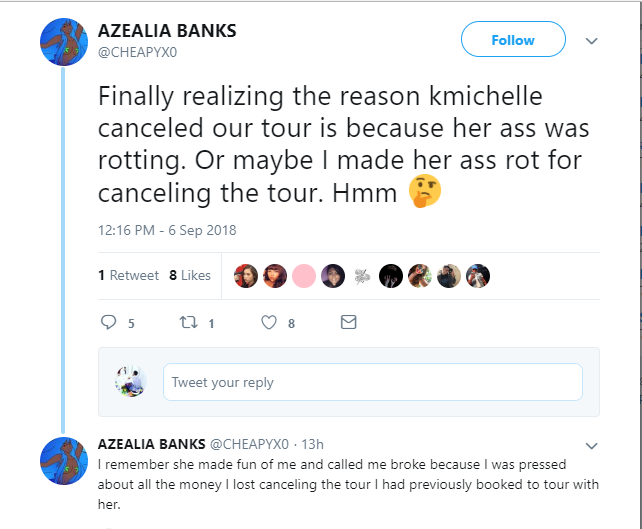