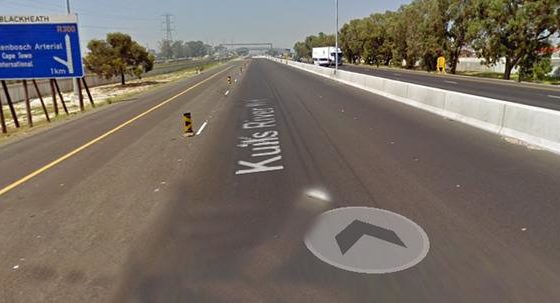 South Africa – A brave man from George has saved his family by stabbing armed robbers with a screwdriver after they were attacked on the notorious R300 highway.

Robin-Lee Burgess, 29, was travelling in his BMW while his parents and 11-year-old brother were in a separate vehicle along the R300, between the Belhar and Kuils River off-ramps.

The family was in Cape Town for the funeral of Burgess’ 90-year-old grandmother on Saturday.

Robin-Lee tells the Daily Voice he was forced to stop along the dangerous stretch of road after having car trouble.

“We knew it was a high-risk area for hijackings and we checked our vehicles for a tow rope,” he says.

“I told my dad I am going to cut the backseat seatbelt for a tow rope. When I looked up I saw three black males; one had a gun and the other two pangas.”

Robin-Lee says he didn’t think about his own life when he saw his mother and brother being attacked.

“The one with the gun who had been pointing it at my dad was busy knocking the firearm and I realised it was jammed. I saw the two with the pangas pulling my mother and my 11-year-old brother out of the car and I jumped out of my car with the screwdriver and began running towards them.

“I watched how he was trying to chop her hands with the panga. I got hold of him and started stabbing him about five times, even in the neck. I wasn’t worried about being shot, I would do anything to protect my family.”

He says the gang fled on foot, with the other two dragging the injured suspect away.

He says they got away with his dad’s cellphone and wallet.

What made matters worse, he says, was that cops allegedly refused to stop and help them.

“I stood in the middle of the road and the cop car didn’t stop, but an Uber driver came to assist us.”

He says the Uber passenger used the safety app Namola to contact police.

Police spokesperson, Sergeant Noloyiso Rwexana, confirms the incident and says no arrests have been made yet.

She said claims that cops did not stop to assist the family would also be investigated.