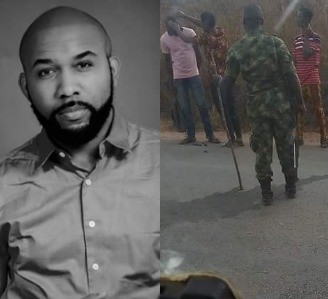 Actor/Politician, Bankole Wellington aka BankyW, has called out the Nigerian Army on Twitter after a photo of three men reportedly being harassed for keeping Afros in Enugu state surfaced online.

Recall that on Monday December 17th, Twitter user, @eketiette shared a post stating that three boys were harrased at a checkpoint in Enugu for carrying Afros and were asked to shave each other’s hair. See tweet below.

Reacting to the story on Wednesday morning, Banky who is contesting for the Lagos Eti Osa Federal Constituency seat in the House of Representatives in the 2019 general election, took to his Twitter handle to demand an explanation from the Army.

”@HQNigerianArmy please will you respond to this??? The military is supposed to serve and protect the people. Not harass, humiliate and torture them. Pls respond.

The Nigerian Army has however not responded.