TOPIC: Give God the Glory

KEY VERSE: “And my God put into mine heart to gather together the nobles, and the rulers and the people, that they might be reckoned by genealogy. And I found a register of the genealogy of them which came up at the first, and found written therein (NEHEMIAH 7:5).

MESSAGE: From the time of the destruction of Jerusalem by Nebuchadnezzar to the time of Nehemiah, the city of Jerusalem had been depopulated. The approximately fifty thousand returnees who came with Zerubbabel on the first return in 536 BC settled primarily in the rural areas of Palestine.

The four thousand who came to Ezra in 457 BC settled in Jerusalem and the immediate area. Because of the small population in the city, special measures were taken in order to make those in the city safe. Thus, the gates were closed at night and not opened until everyone was up and alert in the morning.

Following the divine permission he got, Nehemiah planned to repopulate the city. He said: “And my God put into mine heart to gather together the nobles, and the rulers, and the people, that they might be reckoned by genealogy”.

Nehemiah had the habit of giving credit to God who had put it in his heart to accomplish any task in reference to the re-establishment of Israel in Palestine.

Nehemiah said that God put “into mine heart”. The major problem many people have today is that they do their own will, not God’s. They do not hear from God before they embark on projects . Whether in our individual lives, family life, corporate engagement, church, work or whatever it is that we want to do, we must endeavour to seek the approval of God.

Many people have burnt their fingers by venturing into businesses and careers that God did not plan for them. Nehemiah had a habit of listening to God and following through to whatever He has laid in his heart, and that was the secret of his success in the ministry God gave him.

THOUGHT FOR THE DAY: The secret of success in life and ministry is doing God’s will.

BIBLE READING IN ONE YEAR: GENESIS 17-20

DCLM Daily Manna 6 January 2019 was written by Pastor William Folorunso Kumuyi; is the founder and General Superintendent of the Deeper Life Bible Church situated at KM 42 on the busy Lagos-Ibadan Expressway, Nigeria. 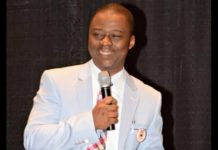