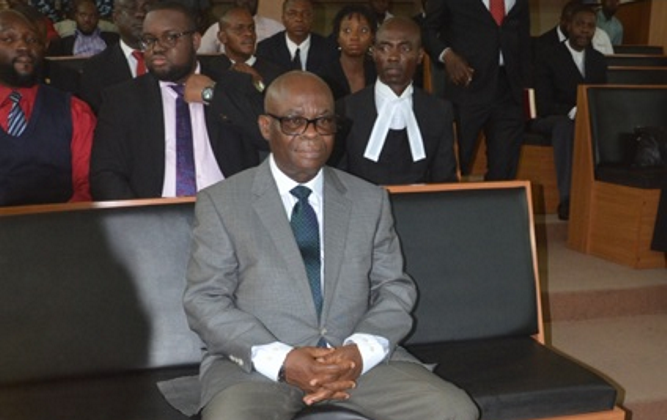 Reading the lead judgment, the tribunal chairman, Danladi Umar, ordered the immediate removal of Onnoghen, 68, from office as the CJN.

The Tribunal also stripped him of all offices earlier occupied, such as the Chairman of the National Judicial Council and also the chairmanship of the Federal Judicial Service Commission.

The tribunal also ordered the forfeiture of the five accounts which defendant failed to declare as part of his assets.

The tribunal also ordered the forfeiture of the money in the five accounts which Onnoghen failed to declare to the Federal Government.

Three punishments were imposed on him as the sentence for his offences as charged.

Although Onnoghen had been on suspension since January 25, 2019 and had reportedly resigned on April 4, the tribunal ordered his removal from office as the Chief Justice of Nigeria and also as the chairman of both the National Judicial Council and the Federal Judicial Service Commission.

Reading the judgment of the three-man bench, its chairman, Danladi Umar, also ordered the forfeiture of the funds in the five bank accounts which the defendant was said to have failed to declare as part of his assets in breach of the Code of Conduct for Public Officers.

Onnoghen was convicted on the six counts preferred against him.

Specifically, the Federal Government, acting through the Code of Conduct Bureau, had, in the charges filed on January 11, accused Onnoghen in the first count of failure to declare his assets to the bureau between June 2005 and December 14, 2016.

In the rest of the five counts, the defendant was alleged to have falsely declared his assets on December 14, 2016, by allegedly omitting to declare his domiciliary dollar, euro and pound sterling-denominated accounts, as well as his two naira accounts, all maintained with the Standard Chattered Bank (Nig.) Ltd.

Before passing the sentence, the tribunal chairman noted that Onnoghen, who only called one witness, failed to dispute the evidence of the three prosecution witnesses.

He said, “The tribunal, having considered the case of the prosecution and documents tendered without objection, find the exhibits tendered worthy of consideration.

“The statement of the defendant made in his handwriting alluding to forgetfulness to declare the five accounts is enough to hold that the defendant clearly contravened the Code of Conduct for Public Officer.”