Ifu Ennada: Men who posts pictures of their way and kids cheat

BBNaija star, Ifu Ennada has stated that men who post pictures of their wife and kids on social media are the ones who cheat the most.

The BBNaija star made this known on social media in such a way that suggests she’s seen many of such men. 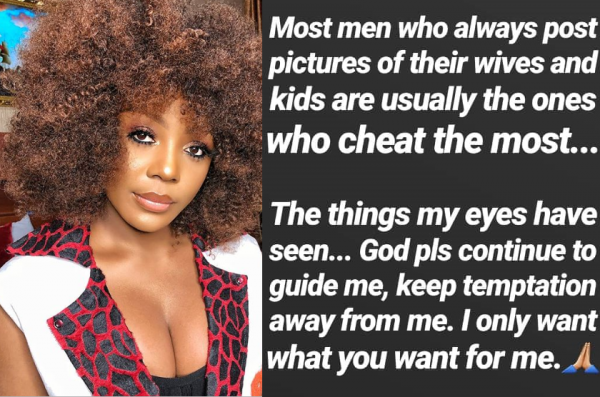 ‘men who always post pictures of their wives and kids are usually the ones who cheat the most. ‘

‘the things my eye have seen. God pls continue to guide me, keep temptation away from me. I only want what you want for me.’

This post from her is coming few weeks after she was on the BBNaija Reunion show with claims that she makes N5million everyday from a hair sales business.

When the heat from Nigerians became too much for her to bear concerning the claim which they find to be outrageous, Ifu Ennada had to go on social media to apologize.