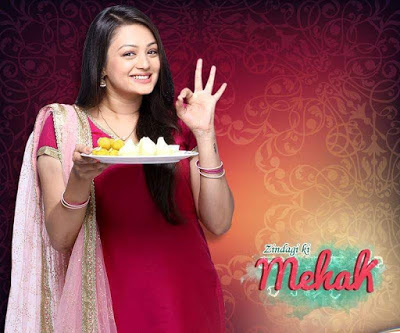 Shaurya comes out of Mahek’s room and scolds host of show that it was your responsibility to handle contestants but i had to do it, bl**dy idiot, he goes in his room. Host comes in Mahek’s room and sees her sleeping on bed and Shaurya’s jacket on bed, she says one side she pretend to be middle class while inside walls of room, she did setting with Shaurya to win show.

Kanta calls Mohit and asks him to meet Mahek at any cost. Balwant calls her. Kanta comes and sees on Tv, reporter one Tv says that Shaurya and contestant Mahek are coming closer, they pool scene is played, Balwant says you wanted her to come on Tv, are you happy now Kanta? Pammi sees news too, she asks Surindar to give her money as she wants to distribute sweets in neighborhood.

Balwant says Mahek has brought disrespect to our house, PD says it must be trick on Shaurya, Mahek cant do this. Balwant says you people are blinded by Mahek and cant see what she is doing.

Reporter says Shaurya was involved with Shurti before. Vaitlana says to Shaurya’s mother that i was right that something was going on between Shaurya and Mahek, Shaurya goes behind any girl, like son like father, they are weak for girls. Shaurya’s father how dare you say all this to me?

Vaitlana says to mother that control Shaurya otherwise there might be many newborn Shauryas in different areas of city, Shaurya’s father says if you dont stop rubbish then i will forget you are my sister in law.

Balwant says to his family that if this news is true then Mahek cant enter this house again.
Mahek wakes up and has hangover. She sees Shaurya’s jacket on bed and says its cruel Kumar’s jacket. She recalls how Shaurya offered her juice, how she wildly danced with him, how he brought her to room, she starts weeping.

Mahek comes to host, host says so miss Chandni chowk, how was your night? you are fast, all were thinking but you trapped most eligible bachelor, Mahek says what are you saying? host says Shaurya change girls like cellphone, control yourself otherwise you will become shame infront of world, she leaves, Mahek is tensed.

Rajiv comes to Shaurya and says what is going on? people are talking about it in media, Shaurya says if man’s name is linked with many girls, then he is called Casanova, stud, playboy but if girl is linked with boy before marraige then she is called sl*t and characterless, she wanted to play so i am playing now, Rajiv says this is cheap, he leaves. Mahek comes to Shaurya and says answer me what happened?

Shaurya says dont you brush your teeth and change clothes in morning? or keep walking dirty? Mahek says i know you spiked my drink, Shaurya’s mother calls him but Mahek snatches his phone and says i know you spiked my drink, Shaurya says you are like elephant, nobody was picking you up so i had to take you to your room, Mahek says then why didnt you go to your room?

Shaurya says this would have happened one day and you should be lucky that boy was me, Mahek is in tears, Shaurya snatches his phone rom her, she leaves, Shaurya snickers. Mehek 24 April 2019 Update

Mahek says you were right, boys are jerk, he took advantage of me in drunk state, i am gone, how will i show my face to Kanta Chachi? Sonal says tell me his name, i will not spare him, Mahek says no need for all this, my life is destroyed, he stole my virginity, Sonal asks her to take deep breath, did he force himself on you?

Mahek says he took my advantage in drunk state, i will shaurya, Sonal says you had your first time with Shaurya Khanna? i am so happy, i will distribute sweets, Mahek says my life is getting destroyed and you are joking? Shaurya comes and listens her conversation, Mahek says i am going to do suicide, what if i become pregnant? Shaurya leaves there. One staff member comes and says show is about to start, come inside, Mahek ends call and goes.

Mahek comes in competition and starts cooking, she is glaring Shaurya while cooking. Shaurya smirks. Mahek wipes her tears and looks at butcher knife in her hands, she shows it to Shaurya and then crazily looks at him, she puts knife on her arm acting lie cutting her pulse, Shaurya says shit, she has gone mad. He comes to her and takes knife from her, he says have you gone mad? you were going to cut your pulse?

Mahek says have you gone mad? i wont do suicide, i will kill you, i will take revenge for taking my virginity, who do this with a girl? Shaurya says shut up.. i was lying to irritate, your virginity is safe with you, you believe anything you listen? and i dont have such bad taste to do something intimate with girl like you, idiot, he goes to sit on his seat. Mahek have sigh of relief. Shaurya says 20seconds left. Mahek says thank God i am saved, Shaurya says run your hands not your mouth.

Pammi gives money to man and make him stick posters of walls of their society.
Sharma family is leaving for Agra but Pammi comes there. Kanta says you here? Pammi says i am with you people, people can says anything but i am with you, Kanta says what are you saying? Pd says tell clearly or else i will punch you. Mehek 24 April 2019 Update

Pammi says let me show you, she shows poster of Mahek and Shaurya intimately close in pool, Jeevan is angry to see it, Kanta reads heading of it that Mahek Sharma can go to any extent to win competition, Pammi says whole neighborhood is filled with these posters. Mehek 24 April 2019 Update

Kanta and family comes out o their house to see Mahek and Shaurya’s poster on all walls, their intimate pictures on display. Pammi says to Kanta that these posters are everywhere, first i thought you people printed them but then i thought why you would play with your honor? Kanta is getting ill, Ravi says i will beat person who did this. He starts taking off posters.

Sharma family comes in house, Balwant shows poster to PD and says dont be blind now, your Mahek’s story is everywhere now, you must be proud to see her succuss like this. Balwant says to Jeevan that we might not be rich but i only have earned respect my whole life but that girl killed my honor today, Jeevan says everything will be fine, we are going to Agra, we will talk to Mahek, this must be someone’s trick to put Mahek down.

Balwant says this is no trick, she is the one not keen on keeping our respect, Kanta told her no but she went to Agra, how will i look at people? he cries. Ravi says dont worry, we will handle it. Kanta says to Jeevan that we should leave for Agra, enough of this drama, they all leave. Balwant is crying, Mansi asks him to calm down. Mehek 24 April 2019 Update

At competition set, inmates are cooking dishes. Rajiv comes to Mahek that i want to guess your dish, he tries but asks what she is making? she says i will make chutni of cheekoo, i will put mint too, i am making sweetdish of bitterguard, i have taken off its seeds so it wont be bitter, Rajiv says amazing, he leaves.

Rajiv comes to Shaurya and people hide seeing snake but only nevla can fight him. Shaurya says you are trying to say i am poisonous snake and you brought this nevla to give me hard time? Rajiv says you tried every trick to put her down but she is making new dishes every day, what spirit she has.

Shaurya says these middle class people dont have honor, they dont care about comments told to them.

Jeevan calls Mohit from car and says we are coming there, i will see who stop me from meeting my daugter.
Shaurya says to Rajiv that these people are greedy, Rajiv says you are disrespecting her talent, she has always made news dishes, she is winning due to her talent, Shaurya says she must be stealing dishes from someone else, Rajiv says its her mother’s dishes, Shaurya says there are many dishes on internet which you can get and call them from your mother. Reporter calls shaurya and says you are in limelight. Your posters with Mahek are everywhere. Shaurya says keep good work, i will send you money.
Shayrya gets call from investor. Investor says i am disappointed with you. You are in news but you will become laughing stock. We made deal with you thinking you havd positive image, p says this is all rubbish. I don’t have relation with my contestants, i want this deal to happen.

Investor says you have to ensure me to not involve in cheap stunts like that, he ends call. Shaura angrily looks at Mahek and says control shaurya, my life’s biggest deal can go to trash because of this cheap girl.
Vaitlana says to shaurya’s mother that Mahek must be getting advantages in show. Mehek 24 April 2019 Update

She says to shurti that your ex is going to someone else, you could have married him and be model wife, i pity you. Shurti says i got your instead of shaurya. What if shaurya throws you out of house? I will send you to old age home. Vaitlana says you gold digger. Mehek 24 April 2019 Update

Shaurya’s mother calls him but he says relax this is just media spreading news, he ends call. Shaurya glares Mahek. Rajiv ask contestants to give final touches to their dishes. Shaurya comes to Mahek and says people are talking about you, Mahek says when you do things from heart then people love you.

Shaurya says you wanted people to talk about you and have fulfilled your middle class dreams here, Mahek says i have work so leave me alone. Rajiv ask contestants to stop cooking as time is up. Rajiv says now tasting time.
Sharma family meet Mohit and Nehal in Agra. Mehek 24 April 2019 Update

Sharma family enters there, Shaurya says what the hell? security, Ravi says your security wont stop us. Shaurya shouts Miss Mahek your family has broken rule of show by coming here, i will put them in jail and send you out of show. Kanta says to Shaurya that enough of your threats.

She says to Mahek that you took advantage of my love, Mahek asks what happened? Kanta shows her poster of her and Shaurya in pool and says this happened, Mahek is shocked. Mehek 24 April 2019 Update