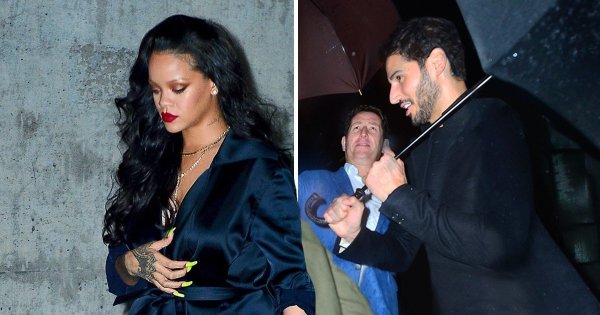 Rihanna may be a global superstar but even Rihanna needs a little normalcy in her life and last night she stepped out with long-term boyfriend Hassan Jameel for an intimate dinner.

Wearing a silky navy blue blazer with tight trousers and stilettos, RiRi opted for a more sophisticated look than some of her more outrageously trendy outfits.

Businessman Hassan, 28, is said to be an ‘intensely private person’ which may be the reason Rihanna and her beau left the establishment separately and have not been officially seen together the whole two years they have been dating.

The restaurant they dined at – Perry St in New York – wasn’t just any old caf.

The exclusive menu consists of everything from ‘Petrossian white sturgeon caviar’ and ‘diver scallops’ and the main meal of fried chicken costs $34. That’s not a KFC bargain bucket, is it?

Rumours of a break-up swirled around the couple last July when they were photographed having an argument while on holiday.

The Diamonds star quickly turned the images into a joke, however, when she suggested that they had only been fighting about the World Cup.

And things only seem to be getting better for the couple, as RiRi reportedly liked an Instagram video featuring an E! reporter predicting that she would ‘go the long haul’ with Hassan.

‘Do I think Rihanna’s worthy of someone worth a billion dollars? Yes, I do,’ she said, ‘Is he worthy of her is the question that’s on everyone’s mind.’

Of course, the Work star might have meant something else entirely by her like, but we like to think it’s her way of confirming marriage and babies are on the cards in the future.

Sorry to go all conspiracy theory here, but it’s entirely possible Rihanna is using her secretive relationship to distract us from the fact her ninth album is nowhere to be found.

A lucky baby might have heard it, but we won’t be happy until it’s playing through our headphones.

One brave fan even told the singer they wanted an album, not make-up when Rihanna released a Fenty bronzer.

Obviously, the queen of clap backs replied with a hilarious response – ‘well, this is bronzer.’

We see what you’re doing Rihanna. Yes we will pore over your relationship, your make-up and your upcoming skincare line. But we will not forget we’re due an album.