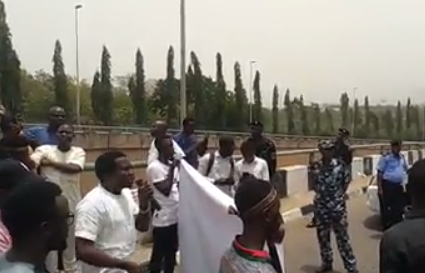 Members of the disbanded Islamic Movement of Nigeria aka Shiites, held a protest at the National Assembly this week where they demanded the immediate release of their leader, Ibrahim El-Zakzaky and his wife who have been in the custody of the Federal government since December 2015 after members of the group had a clash with the Nigerian Army.

Over 1000 memebrs were reportedly killed during the faceoff between the Islamic group members and the Army.

The leader who spoke at the protest, condemned President Buhari for reportedly being silent in the wake of the various killings in Zamfara, Kaduna and many parts in the country.

Watch a video form the protest below