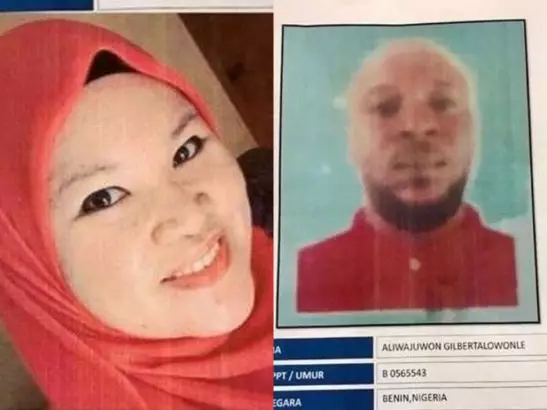 Nigerian man wanted over murder of nurse in Malaysia

Crime – A 35-year-old Nigerian woman has been arrested alongside a 38-year-old Pakistani man by police in Malaysia connection with the murder of one Siti Kharina Mohd Kamarudin in Selangor.

According to Selangor Malaysia police chief, Datuk Noor Azam Jamaludin, another suspect, a Nigerian man in his 30s, Oluwajuwon Gilbert Alowonle, is currently at large.

Siti Kharina’s partially clothed body was found in a one-bedroom studio apartment unit in Third Avenue Condominium in Cyberjaya at about 2.30pm on May 15, 2019. This led to the arrest of the two suspects in Kuala Lumpur.

“We are in the midst of establishing the motive of the murder, the relationship between Siti Kharina and the suspects, as well as the links between all the suspects,” said Noor Azam .

He added that victim’s body was discovered after investigating officers responded to a report made by the unit’s landlord who had spotted blood flowing out from the door.

The body was discovered lying face up, on the floor. It had slash wounds right on her chest, neck and head. She’s believed to have been dead for four to five days

“We are tracking down Alowonle, who entered Malaysia in January, 2019, to assist in investigations.