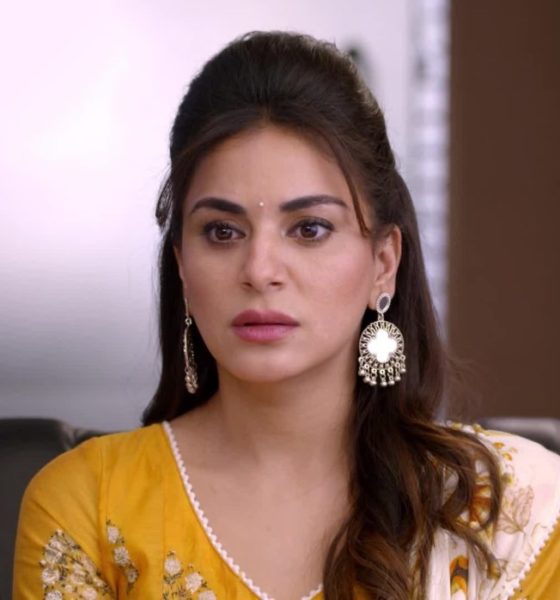 Karan leaves the party. Prithvi follows him, he is stopped by Rakhi, he makes the excuse that he has to talk to him urgently, Rakhi is about to tell him but then excuses that he will come back and has gone outside to take a call, he decides to follow Karan.

Karan is thinking that now nothing will happen, they will take the reports from the courier and everyone will be shocked, Prithvi follow shim, Shrishti is talking won the phone, she sees Samer and gorsy to talk with him, he is am at her and is about to leave, she sops him and asks what the matter is but he does not say anything, she stops him and pressurizes him, he says that she has left him now nothing matters anymore. He decides to not tell her thinking that he cannot tell her the truth because she will take it in the wrong sense.

Rishab brings Manisha to the room and hands her a glass of water, he says that she is fine but She is very angry and cannot be calmed down, he then says that he will bring painkiller for her, she requests that he must let her rest on huis bed, he takes her, Rakhi sees this and gets very emotional, as soon as Rishab comes out She catches him and starts to doubt him that he is taking a chance on Manisha Rishab tries to calm her down and then makes her realize that it is all part of a plan, she understand and he leaves just then Mahesh comes and asks what she means by her saying, she say that she will tell it to him later and take him away.

Rishab enters the room Shristri is ready with the laptop and the recorder is placed on the room shelf, they both turn the volume and hy to hear what she is saying on the phone, both of them are eagerly awaiting for Manisha to speak the name of the person, she is very careful and si not saying the name, Shrishti gets very happy and think that if she says the name then they will catch the mastermind, also Kara and Preeta will know of Sherlin’s truth and Rishab will be free from her.

Sameer tells the incident 9ot Karina, she is very shocked and says that she will talk with her because he is her child and nothing ca happen to them, he says that she tried to harm him by throwing a bouquet on him, she gets mad and says that he must case her before she doesn’t the same, when they are about to leave Sarla is behind them, she is very angry and leaves.

Manisha is calling Prithvi but he is not picking up, Shrishti and Rishab are very eager to hear the name iof the person whom she is calling, Prithvi is not picking the call but when she is adamant then he picks the call and asks the reason, she says that she is in a lot of problem and he is not picking the call. Shrishti is afraid that someone is trying to spy on them, she opens the door and it is the waiter who apologizes and leaves. She comes back and ask if Manisha told the name, he says that they are both fighting and Manisha says to Prithvi that he is doing this for his revenge, he also starts to argue and she says that he must come back otherwise she will back out from the engagement,

Shrishti is much joyed and says that they will now know the face of the person who is behind all this.

Karan calls Preeta and ask where she is, when they agree and he starts to follow her just then he see that Prithvi is following him, she is not able to believe him and says that nothing is like this and he is just making this up, he says that he will bring the car near her and then she can see it for herself.Karan is driving his car, Prithvi is following him, and is very angry at his driving, Shrishti and Rishab are both very excited that they will now know of the mastermind, Dadi comes in, and says that she will be the one who will help them, they both says that she will not do anything of the sort, Dadi says that she is a bigger game player the them both and she will be their support, they are left speechless in front of her and she leaves.

Karan comes and Preeta says to him that she has found the name if the courier boy who is taking the parcel, he opens the door for her, she starts to taunt him and asks where Prithvi is because he said that he was being followed by him, he stars that he was following him and he only hates Prithvi because she does not deserve him, he is a very lower class person, she only deserves the best and nothing less then it, she is left speeches, he levees and sits in the car.

Rishab is very angry at Sameer, he says that he said this kind of a thing and broke his heart, he knows that he has to remain in his limits, Sameer again says a thing and Rishab is about to hit him again, Shristhi and Rishab says that they both must tell him, they the n show him the video and starts to tell him about the plan, they then make him realize his fault, he gets sorry, Shrishti then figures out that he was really fighting with her, she gets angry and Rishab also supports her, she is about ot hit him with her slipper, Rishab then asks her to calm down and figure out their plan of taking Manisha’s mobile,

Manisha is very angry at someone,they cannot understand what she is anything, Dadi is out of the room and starts to act, Manisha is not able to understand what is happening, she make her sit on the bed and takes out her slipper, Sameer says that she is doing Notanki,he he is forced to say sorry.
Shrishti says that she will take the phone e from her hand, Rishab says that this is not possible because she is not leaving the phone, they are all confused, Dadi is not letting Manisha leave the room by making her believe that she is still not really well and needs her support.

Karan and Preeta reach the office and ask for Vishal, they say that they cannot give it to her because it can only be given to the house, they start to shout that they need the reports and need to know if they are positive, He starts to act inform of her and says that Preeta is pregnant and they need the reports, she gives her the number.

When they reach outside, Preeta is very angry and in and is about to go back and tell the truth, he hold her back and asks the courier boy if he went to the house, the boy says that he has already delivered the package and now noting can happen.Preeta pushes Karan away, She asks what the boy said, he says that he said that he has delivered the parcel and some women yelled at him and told him to go away, She gets confused and plans to go and check the house, he is about to leave when she pulls him back and asks how did he says that she looks pregnant because she is not fat, they both start to fight, he then says that she will be the mother of his children, she gets really annoyed and he is having fun, they then move towards the house.

Karina is holding Sherlin’s reports and is thinking of opening it and trying to find what is inside it, just then Rakhi comes and says that she must come with her, she then explains everything to her regarding the plan that they have put in place, she says that Dadi wants to go to the washroom and
she wants her to keep Manisha in Rishab’s room, they both are very determined to win the battle for Karan.

Prithvi enters the hall and is very worried that he has come because Manisha threatened her to come in fifteen minutes.

Karan and Preeta in the car, they both are wondering what will happen when they finally win the battle.
Shrishti and Rishab are in the room and trying to connect the cameras, they are able to succeed and see Prithvi, they are left shocked, Dadi is not letting Manisha go away from the room, she stops her and doesnot let her leave, Rishab asks Shrishti to go and follow Prithvi, she agrees, then she makes fu with Sameer

Rishab notices it and says that they both are having something, because they are interested in each other, they both try to deny it but Rishab is not convinced and asks what is the matter with them, they both say that they are just good friends and nothing else, she then looks at

Sameer and smiles, Rishab starts to make fun of her and she leaves.

Karina comes into the room and Dadi leaves, she makes Manisha stop and says that what she has is Sherlin’s reports, she gets a call and is scared to hear it, just then she leaves out of the room, Manisha tries to call Prithvi but his phone is not reachable, she then texts him hoping that he will see it and come directly to the room.