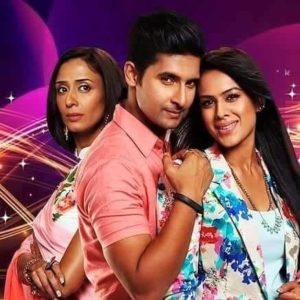 Sid angrily goes home and beats Rajveer. Simran interferes and asks him to behave with his jija. Sid says Rajveer is a filthy bastard who tried to misbehave with Sam. Simran asks if Roshni told him about this. Sid says yes. Simran says she herself saw Sam misbehaving instead and asks him to either believe her or Roshni and takes Kritika and Rajveer from there.

Raj consoles Sid and asks him to relax. Rajveer tells Kritika that they should not let Roshni and Sid unite for their benefit and says he has a plan. DD waits for taxi in a taxi stand. Sid stops his car and asks her to get into his car. She as usual shows her arrogant attitude with her hushy voice.

Sid takes out deodorant, refers her continuously sasuma and starts his witty self, jokes if she sweats in sun like this, she will need deodorant, etc. DD yells at him and asks him dare not to call sasuma. Beggars throng DD.

Sid laughs and asks her to get into car. DD gets in. While driving car he plays radio and Dhoop me nikla na karo roop ki rani… song plays. DD gets irked and asks him to stop trying to impress her, she will not back Roshni at any cost. Sid says last time when she challenged, her daughter became his wife, this time something more good will happen. He says she herself will bring Roshni to him. DD gets out of car angrily. King of Hearts 29 June 2019 Update

DD goes to bank to request postponement of her loan repayment. Mananger gives her loan waive off letter and leaves towards his cabin. DD thinks something is fishy and follows him. Yash dreams about Roshni hugging him and Sid challenging him to go back and thinks he will stay back and will win Roshni at any cost.

DD sees Sid thanking manager for accepting money from him and waiving off DD’s loan. Manager says if every jamai would be like him, there won’t be any problem in sasural. DD scolds Sid for trying to impress her again with money and says he can fool Roshni but not her. Sid says money does not matter to him and only family matters and she is his family. DD tears letter and says he is not her family member and walks out, warning him to stay away from her family. Sid thinks how to convince her.

DD comes back home. Roshni says she has applied for job in 3-4 places. DD says she will get job soon. Door bells rings and Yash comes in. DD asks if everything is alright. He says yes and asks Roshni if he can speak to her for 2 min. She says okay and takes him to the room. Naani asks why did he come here at nigth and what he wants to tell Roshni.

DD says let us see. Yash tells Roshni that after spending time with her, his life has changed. He bends on knees, takes out ring and says I love you. Roshni is shocked to hear that, but stands silently. Yash says he wants to get her out of her sorrows and wants to be her life partner, he wants her to think and give him a chance and until then, ring will be with her as his gift, says whatever her decision is, they are friends and will be friends. He says I love you Roshni and walks out.

Roshni gets Sid’s message that he cannot live away from her. She looks at both SMS and ring confusingly. She goes to park with DD. DD tries to convince her to marry Yash and forget Sid. Roshni asks what is wrong with her. DD says she wants to see her happy before she dies.

Sid tells Raj that DD is irked about him paying her loan. Raj says if their plan succeeds, DD’s financial glory will be back and relationships will be back on track. Sid happily asks if this will happen. Raj says of course yes.

Naani asks Mona why did she send him into room. DD comes and asks who is in room. Mona says Rajveer has come. Rajveer on the other side is seen telling Samaira he still loves her and wants her back. DD enters room, slaps Rajveer and kicks him out of house. She shouts at Sam and Mona for allowing Khurana’s puppet inside her home. Sam asks why she has different rule for Roshni and others. DD says rules are equal for everyone and she does not want any of her family members to meet Khuranas. King of Hearts 29 June 2019 Update

DD goes to her client’s office who gives her order and says he is very proud to be associated with her. Roshni is in Yash’s office reminisces about Yash’s proposal. Yash asks him to give a file, but she hesitates. DD comes there and tells she got a construction business offer. Yash and Roshni congratulate her. DD thinks she has to work hard to repay Sid’s debt.

Naani calls Sid. Just then, some goons enter house and mishandle Naani. Sid hears Naani’s pleas and reaches there in just 1 second and beats goons red and blue till they bleed. One of them slaps naani and she falls unconscious. Roshni reaches home and sees Naani unconscious, she pleads Sid to call doc. Goons elope. Sid calls doc. Doc checks Naani and praises Sid for saving Naani on time.

Inspector also come and says he has caught some goons and wants Nani to identify them. Sid says Naani is unwell and he will come to police station and identify goons. He then tells Naani until he is there, nothing will happen to his family. He says he will send her medicine. He then tells Roshni that she may not consider him as her husband, but he considers her and her family as his family and will protect them. He sees broken frame and picks it. Roshni asks him to be careful. He says those broken glass strands are like his broken heart. Roshni develops soft corner for Sid.

DD comes home and gets worried for Naani. Naani says she would have died if their jamai Sid would not have rescued her on time. DD gets irked hearing her name and makes her usual weird face. Simran nurses Sid’s wound and asks how did he get it. He says some goons attacked Naani maa, so he got injured while rescuing her.

Kritika comes and says nothing happened to that old man. Simran gets irked hearing her misbehavior, says Sid did right, and asks her to respect elders. Yash says Kritika she always complains that he loves Sid more, whenever she stops thinking of herself and thinks about others, he will love her also.

Roshni reminisces Naani praising Sid and Sid protecting her family. She calls Sid and asks if he is alright and did not get injury. He says he is fine. She says she wants to meet him only if he is free. He says his whole life is hers and asks where to come. She asks to come at Leo Cafe around 6 p.m. He gets happy and says he will send car or will pickup himself. She says she will come herself. Raj enters his room and he happily hugs him.

Roshni is at the office and gets a call from DD who asks her to get some papers from house. She agrees and leaves taking permission from Yash. Yash thinks Roshni is in trouble now, but once she accepts him, he will keep her very happy.

DD sees a lots of files on her desk and asks her boss why she is burdened with so many files when this is not her work. Raj comes there, says he is new MD of her company and she will have to work as he says. She angrily tries to walk out when Rajveer tries to brainwash her against Sid that Sid gave her huge debt to burden her under his favours and then use her s*xy daughter like exotic dish.

Roshni comes there and asks Rajveer to mind his business and asks DD to leave Rajveer’s job right now. Rajveer says her mother took loan from Sid and she has to work to repay his loan. DD says Roshni that Rajveer is telling truth. Roshni says she can work accept Yash’s offer. DD says she is already overburdened by Yash’s helps and she does need anymore. Roshni sees goon who entered home and misbehaved with Naani and manager giving him money saying saying Sid gave it. Goon says if Sid needs more help in trapping his wife, he can call him anytime. She and DD both start fuming. Rajveer smirks, thinking his planning is working well.

Simran comes to DD’s house to meet Naani and says Naani she could not resist hearing about goon’s attack and came her to see her. Naani says she did good. Simran says she is thinking about reviving Sid and Roshni’s relationship again. Just then, DD enters home with Roshni and shouts at her that her son planned well with goons to trap Roshni again, but he failed. She drags her out of house. She says her son is like a diamond and she cannot understand his value, she came here thinking of starting afresh, but she and her arrogant daughter don’t deserve Sid’s love. DD shuts door. King of Hearts 29 June 2019 Update

Sid awaits for Roshni. Roshni comes. He romances her on a light background music. It is just his imagination. Roshni comes. Sid says he was waiting for this day since 6 months. Roshni starts crying and says she has decided something for them. He asks what.

Pratima says DD she did wrong by shutting door on Simran. DD says she did right as Simran proved her and talked about her husband who left her, but she took care of his family and is right. Naani comes and says instead of uniting Roshni and Sid, she is trying to break their relationship, which is very wrong. Roshni gives divorce papers to Sid and asks him to sign it. Sid asks what is it. She says if he really wants to see her happy, he should sign on papers. End…