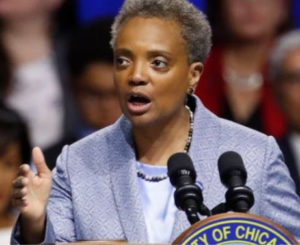 Chicago Mayor, Lori Lightfoot has said that her city has permanently banned U.S. Immigration and Customs Enforcement from accessing the Chicago Police Department’s databases ahead of looming ICE raids to detain undocumented immigrants.

Chicago police “will not team up with ICE to detain any resident,” the mayor said after meeting with business leaders and immigration rights advocates at Lurie Children’s Hospital.

“They’re not going to be facilitating or otherwise providing any assistance in any raids whether it’s traffic stops [or] additional support. We have also cut off ICE from any access from any CPD databases and that will remain permanent.”

On June 22, President Donald Trump announced that he would delay his plans for mass deportation roundups in at least 10 major cities, including Miami, Los Angeles and Chicago. He tweeted that he hoped the two-week delay would allow Democrats to “work out a solution to the Asylum and Loophole problems at the Southern Border.”