Home BBNAIJA STARS BBNaija 2019: You are my man and I don’t care what anyone...

BBNaija 2019: It appears the love Khafi feels for her lover and fellow housemate Gedoni is strong and she is not letting anything or anyone come in between them.

Premiumnews24.com reported the news of how fellow housemate Mercy spoke to Khafi on not losing sight of her game. According to Mercy, Khafi should stop focusing on Gedoni and realize the reason she is in BBNaija house as they all know what they went through to be selected for the show.

This is coming after one of the new housemates, Venita advised Khafi to take it slow with Gedoni. Well, it appears she is shunning all of them and focusing more on her love for Gedoni.

Despite agreeing with Mercy, Khafi turned around and told Gedoni that everyone is against their relationship and wants to separate them. She revealed this while assuring him of her love.

"I don't care if Venita thinks I'm always with you, you're my man and I don't care." – Khafi.
Must be nice having someone to call your man 😍 #BBNaija https://t.co/4cHCj0BQLa pic.twitter.com/QjfZnaldXV 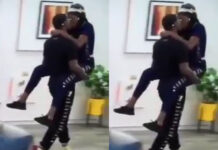