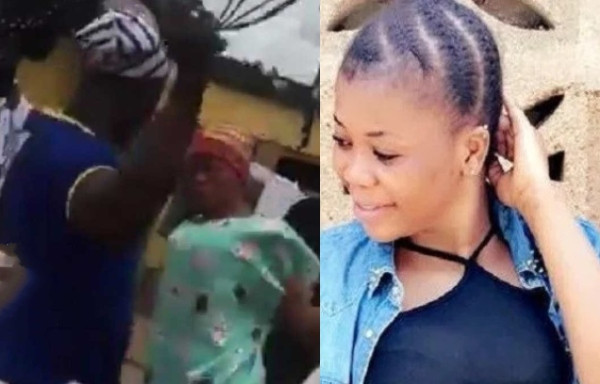 The Ghanaian slay queen spotted in a video days ago telling those reposting her sex tape to continue, had her hair shaved and was also flogged by the Chief of Tamale community she resides in over the leaked sex video.

The Tamale slay queen identified as Kulu received 12 strokes of the cane alongside her lover Papii yesterday August 15, at the palace of Dakpema of Tamale Naa Bawa Fuseini. They were also told to provide two rams and some fouls as sacrifice to cleanse the land over the alleged sacrilegious act.

Naa Bawa Fuseini reportedly defended his action by claiming it was meant to serve as warning to other youths in the community intending to tow same path. He also vowed to mete out same treatment to any indecent act uncovered in the community.

“Our intention is to prevent these behaviors among young people in the city. We are going to continue with this action and any videos that we see and we think that it is not healthy for public consumption, we will look for such persons and punish them severely,” Naa Bawa Fuseini, the Dakpema of Tamale said

Here is the video that captured the moment Kulu was flogged with her lover;

Kulu too suffer oo. The Tamale Slay Queen having her hair shaved by her family after her s£x taped leaked 😩