by admin
in ZEE WORLD UPDATES
0

The Heir 13 August 2019 Update starts as Yuvraaj, Mannu, Rohan and others go for first round. Yuvraaj thinks Sushila giving him magnet to find coin. Harjeet smiles and thinks how he gave coin to Rohan and asked him to act of finding coin. Amba prays for Mannu. They al start finding the coin. Rohan’s coin falls in the tub and he worries. Yuvraaj uses magnet. The man says Mannu did not start finding coin, did he lose, I think Yuvraaj or Rohan will win. 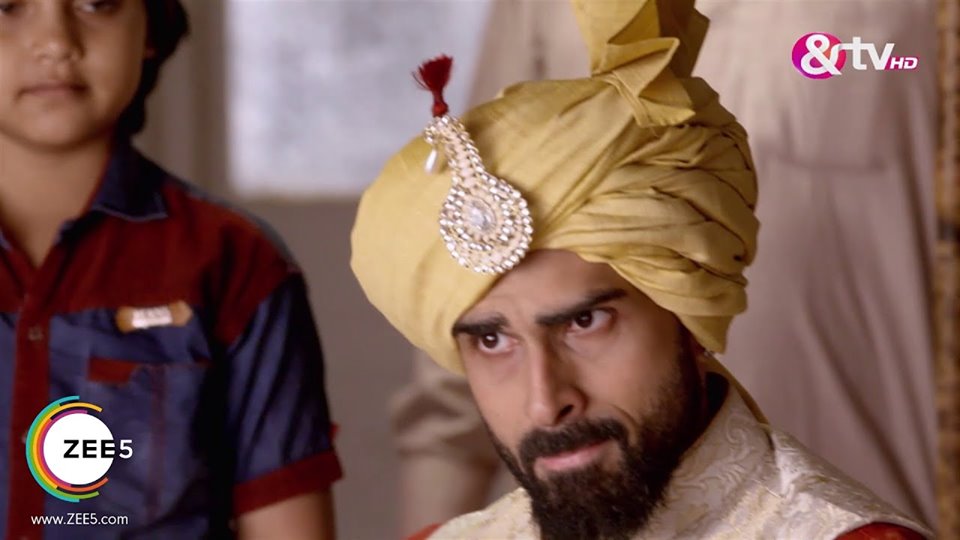 Simran thinks why is Mannu not doing anything. Mannu thinks soil will deposit in water in some time. Mannu puts hand on water tub and finds coin first. Amba claps. Man announces Mannu as the winner. Yuvraaj and Rohan fail.

Harjeet says I don’t believe this, is this a joke, Mannu cheated, all kids were working hard and he just found it, how. Mannu says I was standing, but this was my game, I knew coin can’t be found like that, bottle lids will float, but coin will be heavy and sit down, its not cheating, its science. Everyone clap. Bebe looks on.

The man says its physical test now. The carts have to be driven by hand. The man says the three kids have to drive this and reach the line, that kid will be winner. Harjeet asks whats new in this, why don’t kids make their mum sit and then drive the cart. Harjeet thinks Rohan will win now, Pavaniyas will fight as two kids and one mum. Yuvraaj says I don’t have mum. Bebe says Yuvraaj is not illegitimate, I m like his mum, I will sit in his cart.

Amba worries and says its tough, but you have to have courage, you know we will get a lot across that line. Mannu says trust me. Bebe, Amrit and Amba sit in the carts. Mannu, Yuvraaj and Rohan get ready.

Sushila signs the man. The man makes Mannu step back and makes the cart fall in pit. He asks them to be ready. The race begins. Mannu fails to pull the cart as wheel is stuck in pit. Amba sees the pit. Mannu says wheel got stuck. Amba says I will help you. Yuvraaj and Rohan go ahead. The man asks Amba not to get down, else he will be disqualified. Amba asks Mannu to pull the wheel, they have gone much ahead. Mannu asks her not to get down, else he will be out of race.

Mannu gets encouraged and pulls cart out of the pit. Mannu starts running. Amba asks him to run faster. Everyone clap. Amba asks Mannu to run faster and encourages her. The man says Mannu is very far, Yuvraaj and Rohan have tough competition, Yuvraaj left Rohan behind. Bebe says I m getting dizzy, slow down. Yuvraaj thinks no one can make me lose today.

Amrit asks Rohan to be careful, I will fall. Rohan says you got fat, I have to win, hold well and sit. Mannu sees stones in the path and steps on glass piece, while saving the cart from getting jerk. Amba sees Mannu hurt. The man says Mannu has reached close to Rohan and Yuvraaj.

Mannu runs ahead of Rohan. Amba says Rohan got behind, just Yuvraaj is left, run Mannu. The man says Mannu is going like storm. Yuvraaj and Mannu see each other and recall their words. Amba and Bebe see each other and recall their words. Mannu gets ahead of Yuvraaj. Simran and Gunjan smile. Amba says Mannu, my son run faster. Amba gets glad. She sees the wheel coming out and holds it. Her hand gets hurt.

Mannu sees her hand bleeding and stops the cart. She asks him to run fast. Mannu says you are most imp to me. She says we have to run fast, come.

Mannu says no, I don’t want this. Amba says you have to prove you are better than boys, you have to prove girls are not weak, my victory is in your victory, for my sake, come fast. Yuvraaj goes ahead. Amba says are you listening or not, run the cart fast. Mannu picks cart stand and runs. Everyone wait to see who wins. Amba asks Mannu to run faster. Yuvraaj gets tired. Mannu gets ahead, while Amba holds the wheel. Bebe looks on.

Jagan says Mannu will win. Sushila says if wheel bolt gets removed, what will happen. Jagan says cart will break. Sushila shows the bolt and recalls how the man removed the bolt. Jagan laughs. Mannu and Amba pray and run. The man says we have to see who wins. Mannu gets ahead.

Harjeet shouts to Rohan to run. The wheel falls out, and Amba gets jerk. Everyone get shocked. Amba asks Mannu to keep running. The people cheer for Mannu. Jagan and Sushila get shocked. Mannu wins the race. The man announces Mannu as winner. Yuvraaj gets angry. Simran and Gunjan hug. Amba hugs Mannu. Bebe looks on.

The village praises Mannu. Harjeet gets angry. The man says winner is just one, the trophy goes to….. Simran and Gunjan ask Mannu to go and take trophy. Mannu smiles. The man announces Yuvraaj as winner. They all get shocked. The man says Yuvraaj failed Mannu and Rohan ad won competition. Bebe asks Yuvraaj to go. The man signs Sushila. Gunjan asks how Yuvraaj, Mannu has won, this is wrong, Mannu is the winner.

Amba gets angry and asks Bebe will she accept this fraud win, Mannu won, not Yuvraaj. Harjeet and Sushila smile. Simran says Bebe forgot what Mannu did for us. Jagan says don’t argue, we Pavaniyas won, not Bajwas, it does not matter which kid won from our family. Amba says no use to say anything.

Bebe says all villagers will be having many questions, this boy Yuvraaj Singh Pavaniya is new Shah, I declare him Shah in front of you all. Bebe makes him wear Shah pagdi and kalgi. Amba and Mannu get shocked.

Amba gets disappointed with Bebe. She says Bebe has gone blind and not seeing Mannu’s win, but I have seen Mannu winning, all the people have seen Mannu, how he has won. She asks Mannu to come and leaves. Yuvraaj asks Mannu how does he look wearing Pagdi and Kalgi. Mannu says my dad’s dream and mum’s heart matter to me, and you broke that, I will not leave you. The Heir 13 August 2019 Update – Zee World

Yuvraaj laughs off and goes. Raj comes to Mannu and says I know they cheated you. Mannu says I know who has done this. He recalls the man. He asks Raj to come and see. Yuvraaj talks to the man. The man takes money and goes. Raj says its same man, it means Yuvraaj bought this man. Mannu says there is someone with Yuvraaj, else how can he get money. Raj says we will tell your Bebe. Mannu says no, she will not believe without proof. Raj asks how will we get proof.

Mannu says there is a way. Raj asks what. They go to the shade. Raj asks will this work. Mannu writes a letter. He says yes, I know there is someone with Yuvraaj, we will know who is helping him. They go to postman. Mannu gives the letter and explains. Postman says fine, I will deliver this letter. Mannu and Raj hope the work gets done. Amba cries and is angry.

Bebe says what does she think, I can’t do anything without her. She asks Amba not to come to her. She says I should have done this before. Amba takes clothes and goes. Bebe asks what happened, can’t you bear failure, that you are hiding and leaving, you said Mannu will win, she is Preet. Amba says they cheated and made Mannu lose.

The Heir 13 August 2019 Update ends as Bebe asks what will you stay, can’t I know this, is it not my right, you can go, but listen carefully, once you leave, I will not let you enter home, I will die. Amba asks why, don’t you want me to go. Bebe says don’t put yours words in my mouth, you leave, Yuvraaj will be Shah till I m alive. Amba nods. She packs her bags. Bebe goes.

Disturbing Video: Girl lets her dog dry hump her from behind

Green Tea Beauty Product Your Skin Will Thank You for

Get ready for new Beats headphones at the iPhone event