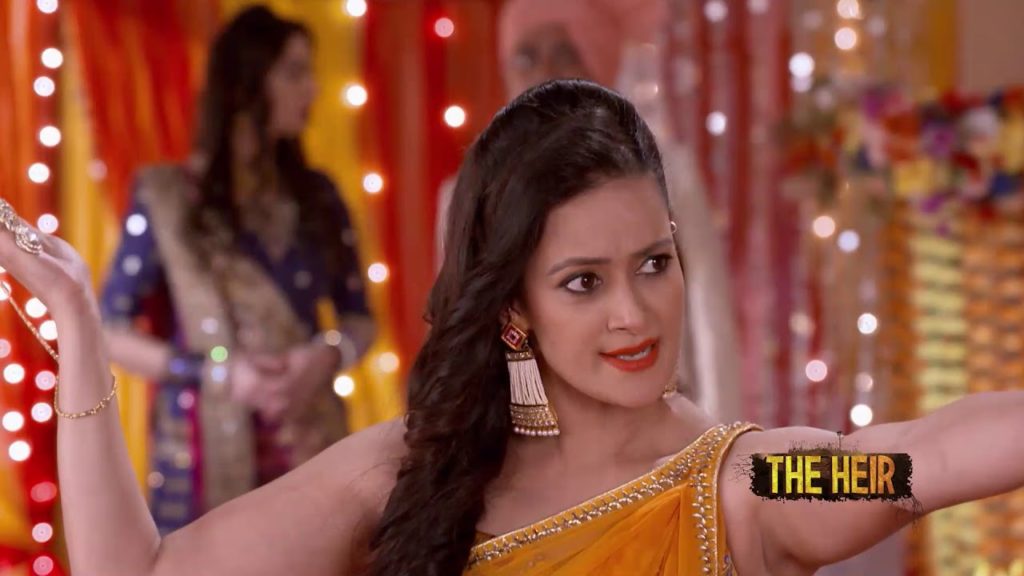 The Heir 29 August 2019 Update on Zee World – Raman saying I love Simran. Mannu recalls Raj’s words and asks will you marry Simran, as lovers do. Raman says yes, I’ll marry Simran. Mannu hugs him and says then everything will get fine, maybe the enmity will also end, we now have to be careful. Harjeet asks the lads to go and find Raman. Amrit cries. He scolds her. She says perhaps Raman doesn’t need to keep here, so he ran away. He slaps her.

Mohini comes there and smiles. He asks who’re you. She says Banjaran, I distribute happiness in each house. Swaroop asks why did you come. Mohini says I’ve to talk to Harjeet in private.

Swaroop asks her to get lost. Mohini says if I go today, Harjeet will regret a lot. Harjeet says let her come Swaroop. He asks Mohini to come. They go to the room. He asks her to say. She says you are young and handsome, but anyone can fool you, first Amba, then Mannu and now your own son Raman. He asks Raman, how do you know him, where is he. She says I will say, but my legs are aching as I m roaming since long, I don’t have food, clothes and home.

He says tell me about Raman, you will get everything. She smiles and says Raman is there from where you got insulted. He says Pavaniya house. He asks how do you know. She says take the entire pind, else they won’t let you go inside.

He says how to trust you. She says fine, I will go. He says if your news is wrong, I will not leave you. She says if news is true, even then don’t leave me. He gets angry. Raj hears this and thinks to call Mannu. Mohini recalls Amba’s words and says you snatched my Jai, I will snatch your happiness, once Harjeet gets Raman there, see he will not leave you Mannu. Simran says where will we hide Raman.

Raman says don’t worry, I will run away, Mannu says no, there is no time to run now, you hide in that sack. They hide Raman in the sack. Harjeet, Swaroop and panchayat come there to find Raman. Jagan stops him and says Raman is not here.

Harjeet says you have kidnapped my son. Amba says Raman is not here. Harjeet says let us check house, truth will be known. Jagan scolds him. Panchayat asks Amba to let Harjeet check house and end matter. Amba agrees. Jagan says how will we let them check house. She says someone lost child, we can do this.

Harjeet says your house is small, we will know in 2mins. He asks his men to go and check house well. Mannu and Simran worry. Jagan recalls Simran’s words. He thinks it means Raman is there, see what I do now. The men say we checked all rooms, he is not here. Harjeet sees Simran tensed and looking at storeroom.

He says one room is left. Harjeet and his men go to check storeroom. Jagan says you want to be satisfied right. He gets a metal stick and says I did not invite you here, but now I will not send you empty hand. He stabs the sack and gets rice. He says Raman will be hiding in any sack, till when will he hide. He stabs and tears more sacks.

Simran and Mannu worry. Jagan says Harjeet, this is my house, godown and sacks, but its done for you. Swaroop gets scared. Gunjan holds Simran’s hand. Jagan goes to the sack in which Raman is hiding. Simran cries. Mannu worries. The Heir 29 August 2019 Update on Zee World

Jagan goes to stab that sack. Simran cries in shock. Amba gets shocked. Simran crying. Jagan does not get Raman. Simran gets relieved. Panchayat says Raman is not here, is there anything left. Harjeet says we will leave. Amba says I told before also, if anything goes missing in their house, they come here.

Jagan says maybe Harjeet sold his son and came here. Swaroop scolds him. Jagan taunts her. Mannu says enough now. Sarpanch asks Harjeet not to trouble Pavaniyas now. Harjeet leaves. Sarpanch apologizes to Amba and goes. They all go. Amba sees Simran tensed. She goes. Mannu recalls going back and pushing Raman’s sack away. He hugs Simran. He says we have to talk to mummy, we saved Raman. Amba asks Simran where is Raman. Simran says how will he be here.

Amba says I m your mum, why are you so scared, tell me where is Raman. Mannu says I will tell you. Jagan goes back to storeroom and checks all sacks again. He stabs the sacks to check. He wonders where is Raman. He sees a sack and smiles. Amba says say truth, matter can get bad. Jagan comes there and drags Simran out.

He says no one will talk now, I know everything, you will see her doings now. Amba and Mannu worry. Jagan says Raman came to our house as he is having an affair with Simmi, you see now. He goes and calls out Raman to come out, else I will not leave Simran. He hits beside Simran. Simran cries. Jagan asks Raman to come out. Amba asks him to leave Simran. Raavi says leave her. Jagan says Raman come here, else I will kill Simran. Amba asks him to stop it. Jagan signs them to stop and hear the footsteps.

Raman comes out of storeroom. They all get shocked. Simran runs to him. Jagan pushes her and beats up Raman. Amba looks on. Simran asks Jagan to leave Raman. Raman screams in pain. Raavi holds Simran. Simran asks Amba to stop Jagan. Jagan beats Raman more. Mannu gets on Jagan’s head to stop him. Jagan holds his head and falls down. Simran sits crying. Mannu asks Gunjan and Sukhi to catch Jagan.

They drag Jagan and tie him. Jagan says enemy has come home, you are supporting him. Raavi shouts shut up. Jagan looks at her. Amba sees Raman. Simran says I was going to tell you. Amba slaps Simran. Simran falls down. Amba asks Mannu did you know this, why did you not tell me, if Harjeet got Raman here, there would have been many deaths in this pind, your dad gave his life to bring peace in this village.

Raman and Simran cry. She asks Simran what did she do instead fulfilling Charan’s dream. She calls Harjeet. Simran says stop. Mannu says Simran and Raman want to marry. Amba gets shocked. She stops calling. Mannu says this is the truth, Simran and Raman love each other and want to marry, everything will get fine when both families meet. Amba asks how will everything get fine. Amba worries.

The Heir 29 August 2019 Update – Mannu says why not, love can happen with anyone, much wrong happened, love is biggest ointment, maybe this will end our families fight, Papa ji’s dream can also be fulfilled. Jagan looks on. Amba recalls Harjeet and Jagan’s fights. She thinks I know Bajwas and Pavaniyas’ enmity willl take another turn.