The Federal Government has slammed a fresh seven-count charge against detained political activist and convener of the RevolutionNow Protest, Omoyele Sowore, accusing him of treason, money laundering and cyberstalking President Buhari.

The case was filed at the Abuja Division of the Federal High Court and it comes 24 hours to the expiration of the 45-day period the court permitted the DSS to hold him. Also charged with Sowore in case FHC/ ABJ/CR/235/2019, is Olawale Adebayo Bakare (aka Mandate), who was arrested in Osogbo, Osun state.

According to the charge, the Federal Government alleges that the defendants conspired to commit treasonable felony, contrary to section 516 of the criminal Code Act Cap C38 Laws of the Federation of Nigeria, 2004, and punishable under the same section of the Act.

“That you Omoyele Stephen Sowore , Male Adult of No 1 Mosafejo Street, Kiribo, Ese-Odo LGA, Ondo State, Olawale Adebayo Bakare {aka Mandate} Male, Adult of Olaiya Arca, Oshogbo LGA Osun State and others at large, under the eagis of Coalition for Revolution (CORE), sometimes in August 2019 in Abuja, Lagos and other parts of Nigeria within the jurisdiction of this honourable court, did conspire amongst yourselves to stage a revolution campaign on 5th day of August 2019 tagged #RevolutionNow” aimed at removing the President and Commander-in-Chief of the Armed Forces of the Federal Republic of Nigeria during his term of office otherwise known than by constitutional means”.

The government also accuses Sowore of committing “cyberstalking”, contrary to section 24 (1) (b) of the Cybercrimes (Prohibition, Prevention) Act, 2015 and punishable under the same section of the Act. Cyberstalking means the repeated use of electronic communications to harass or frighten someone, for example by sending threatening emails.

Another count accuses him of illegal transfer of funds contrary to section 15(1) of the Money Laundering (Prohibition) Act, 2011 and punishable under the same section of the Act.

The government alleges that Sowore on April 2, at Lagos and Abuja, transferred by means of SWIFT wire, the sum of $19, 975 from his United Bank of Africa Plc Account No. 3002246104 credited by City Bank, New York City, USA, into Sahara Reporters Media Foundations GTB Account No. 0424048298 with the aim of concealing or disguising the illicit origin of the funds.

It alleged that he also transferred $16, 975 from the same UBA Account credited to him by LANDRUM of 7e 146 W 29th Streeet, New York, NY10001, USA, via City Bank Plc, the aim to conceal the illicit origin of the funds.

The charge, which was endorsed by the Attorney General of the Federation and Minister of Justice, Abubakar Malami, SAN, was signed by a senior state counsel, Mr. A.M. Alilu. FG has already lined-up six witnesses against the defendants, including bank officials from UBA and GTB.

The detained activist and publisher of Sahara Reporters was the presidential candidate of the African Action Congress, AAC, in the last general election. He has been in custody of the Department of State Service, DSS, since Agust 2 when he was arrested.

The Court had granted DSS leave to detain him for 45 days to enable the agency to conclude its investigations. The court gave the agency the leave to apply for extension of the detention order after September 21. 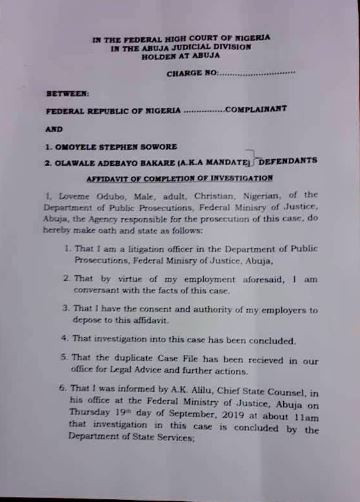 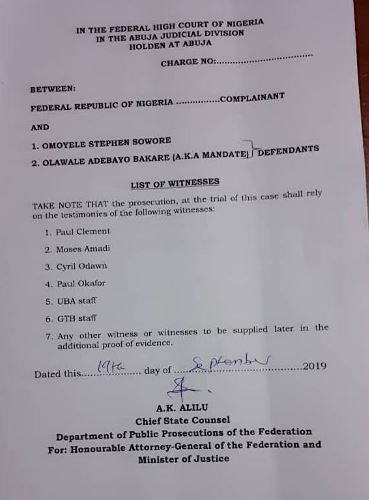 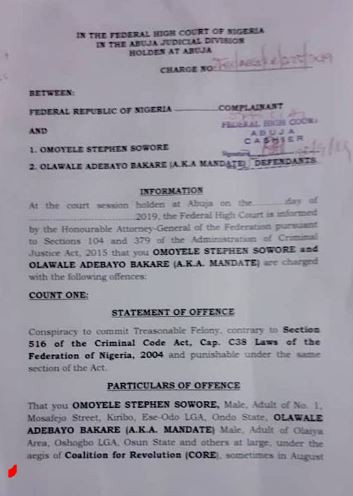 DSS had told the court that Sowore got foreign sponsorship to wage war against the administration of President Muhammadu Buhari. It tendered evidence to prove that Sowore held meetings with both the leader of the proscribed Indigenous People of Biafra, Nnamdi Kanu and members of the proscribed Islamic Movement of Nigeria, IMN.