Ivanka Trump grabbed world-wide attention with her chic-look to the 74th United Nations General Assembly in New York on September 23.

The mother of three and US’ first daughter paired her blue silky button-down blouse and an arty floral midi skirt from Prada, with a pair of pointy-toed pumps that had a shiny black upper and slim stiletto heel. Ivanka however suffered a possible wardrobe malfunction as she gave the world more than a glimpse of the outline of her nipples through her shirt. 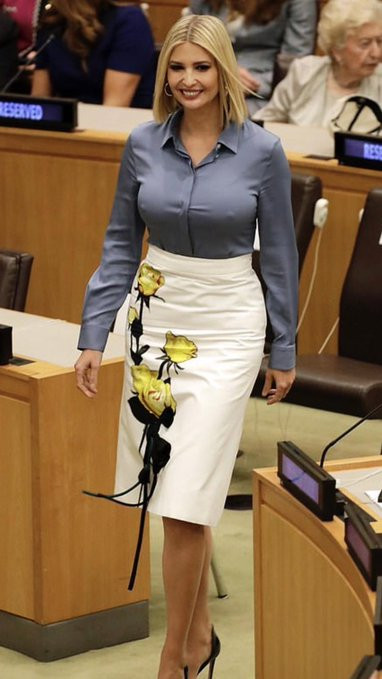 The outfit she wore to the high-prrofile event erupted into a frenzy of comments on Twitter. Here are some tweets below; 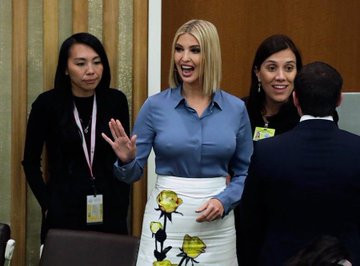 Ivanka Trump heads out in NYC
You’d think you could afford a shirt (and bra) that fits… showing nips has a time & place and this isn’t it (💵 well spent but I’m Pro-B👀b, anti b👀b job, btw. Lead a horticulture… https://t.co/egYWsIR2ZP

Ivanka Trump vs Barney Frank. Who wore it best? pic.twitter.com/FTy1h2zPUO

What the hell is she doing at the UN? #IvankaTrump pic.twitter.com/SLq4rLK26d

When not siphoning money from corrupt foreign givernments to Trump companies Ivanka can be seen flashing her titties at the UN. pic.twitter.com/CzJjB3bbRy

Are you ever wearing a bra?? You and your stepmommy need to cover up and be more decent when representing America!! pic.twitter.com/2bx226WP4U