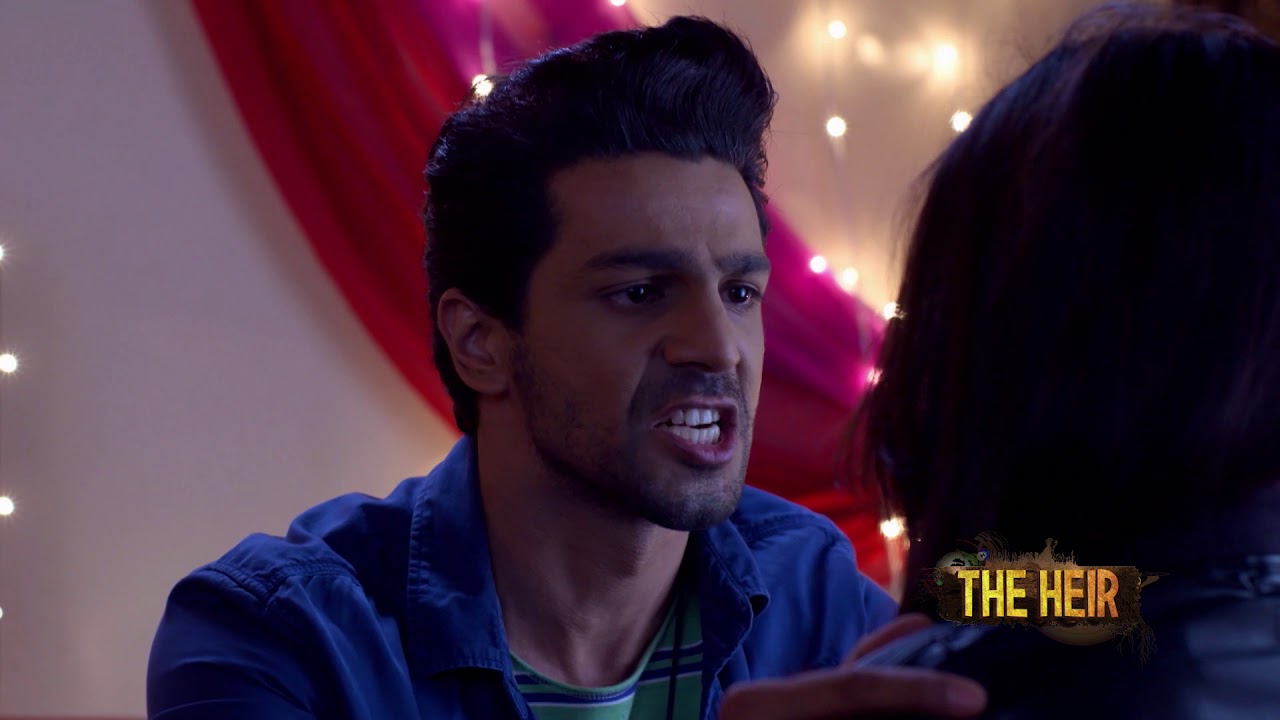 The Heir 13 October 2019 Update starts with Sakshi coming to Raj and Mannu says Simran should not be troubled. She goes. Raj says how can she think I can hurt Simran. Sakshi says just I understood you, not Mannu, everything will be fine. He says I have to talk to mummy. He goes. Sakshi says it will happen what we want and smiles. Jagan kicks out Amba from home. Raavi and Sukhi try to stop him. Jagan taunts on Amba’s lies. Amba sees her daughter’s pic and gets emotional.

Mohini asks Simran to have milk. Sakshi asks Mohini to move, she will feed Simran with love. Simran listens to Sakshi. Mohini says so much love with enemy’s sister, I will trouble her so much that Preet begs me for her. Sakshi says then she has to leave from Raj’s life for her sister. Simran drops the milk and gets scared. Mohini gets angry. She asks Simran to go and gives her a sickle.
Raj goes to Amrit. Amrit says you changed and can do anything.

Raj says you dont trust me now, its all because of Preet, right. She says you will feel this, you are going according to Mohini’s mind, you got Simran here. He says why don’t you understand, this planning is of Mohini. She reminds what Mohini did with her, she made them leave home. Simran asks Mannu to move back, she has to go home. Simran asks them to open door. Mannu asks her to be careful. Mohini and Sakshi smile.

Mannu takes a sickle to stop Simran. Harjeet and Nihaal look on. Mannu fools Simran and then throws the sickle. Simran imitates her and throws the sickle. Simran says I have won. Mannu claps. Simran picks sickle again. Raj comes and gets shocked. Mannu says give this to me, I will get toffees for you. Rohan comes and looks on. He signs Mannu. He takes sickle from Simran’s hand. Rohan’s hand gets a cut. Raj gets worried. Nihaal smiles.

Simran sees the blood and gets dizzy. Rohan holds Simran and asks them not to get close to Simran. He asks Mannu what is Simran doing here, I asked you to drop her home. Harjeet goes. Mohini says Simran will stay here, he is eldest bahu, where will she stay. Rohan asks don’t you find your thinking disgusting, you just see a Pavaniya in her, not an innocent girl, if anyone comes near her, then…. He lifts Simran and goes.

Mannu stops Raj and asks how did sickle come in Simran’s hand. Raj asks what do you mean to say. She says what you are understanding, this was your game. Raj says fine, if you want to hear this, I did this. Mohini and Sakshi smile. Mannu says I knew this. Raj holds her hand and says your thinking is bad, bad person finds everyone bad, you think I will trouble Simran, as you are such, you killed Raman, today my brother saved Simran, see the difference between you and us.

Mohini sends Sakshi after Raj. Mannu cries. Mohini says Raj can’t understand such girls, Simran is trapping Rohan now, she has trapped Raman before, Amba taught this to them, did you see Rohan supporting her, he fought with Harjeet for Simran, if Rohan falls weak, Bajwas will fall weak, Mannu cheated and married you, now she is using Simran to trap Rohan, you wanted Rohan to become Shah, Mannu is amazing, her motive got fulfilled. Raj gets angry.

Rohan sees to Simran’s care. He does aid to her wound. She asks is this your house. He nods. She says your family won’t let me go to my mum. He says don’t worry, I will take you. He feeds her food. She feeds him first. Mannu gets haldi milk for Rohan and tells Raj that Rohan got hurt because of Simran, so its my duty to take this. Raj says you have this first, you may have added poison. She says I m seeing today, your thinking is cheap. He asks her to keep Simran away, you got her here and saying this.

He asks how much will you fall, how long will you try to stay here, you are using Simran, I have promised Amrit, else you would have gone out of here. She says I will wait and cut your every plan, don’t forget, my name is Mannu. He says I m Bajwas Shah. She asks how long will he hurt Amrit.

Sakshi comes and argues with Mannu. Mannu asks who are you, you are a guest right, guests should not talk between husband and wife. She goes. Sakshi says Mannu has got here, she will take Simran, she will make her enter Rohan’s life. He says I will never let this happen. Mannu smiles seeing Rohan making Simran laugh. She thanks Lord that there is someone to take care of Simran. Raj scolds her.

Mannu says Rohan has calmed Simran, you can’t go in. He asks her to move. She refuses. Simran comes out. Rohan says come, you can see their fight anytime. Simran rests to sleep. Amba recalls Simran. Raavi says I know you are worried for Simran. She calls Mannu. She asks is anyone telling anything to Simran.

Mannu asks her to make her talk to Amba. Mannu talks to Amba and say they are troubling Simran, but she is here to take care of her, if you cared for her, you would have got her treatment done than hiding her from everyone. Raavi says everything will get fine. The Heir 13 October 2019 Update on Zee World

Raj says how dare she do all this. Sakshi provokes him against Mannu. She asks him to rest for some time. She says I got our fav songs, your tension will be gone now. He hears music and sleeps. Mannu goes to Simran. Someone scares her wearing a mask. Simran shouts. Mannu shouts for help. Rohan comes and asks what happened. Mannu says Simran is worried. Rohan breaks the door. They see Simran terrified. Rohan looks around the room. Simran says ghosts will come again.

The Heir 13 October 2019 Update ends as Mannu cries and thinks I will not leave the none who did this. Sakshi says it was fun, Nihaal says Mohini’s idea is always good, where is your mask. Sakshi says its there where it should be. Mannu goes to Raj and asks how can you sleep this way, I know you are not answering. She gets the mask and thinks Raj scared Simran, I did not think he will fall so low, I don’t believe this, I loved a man like him.