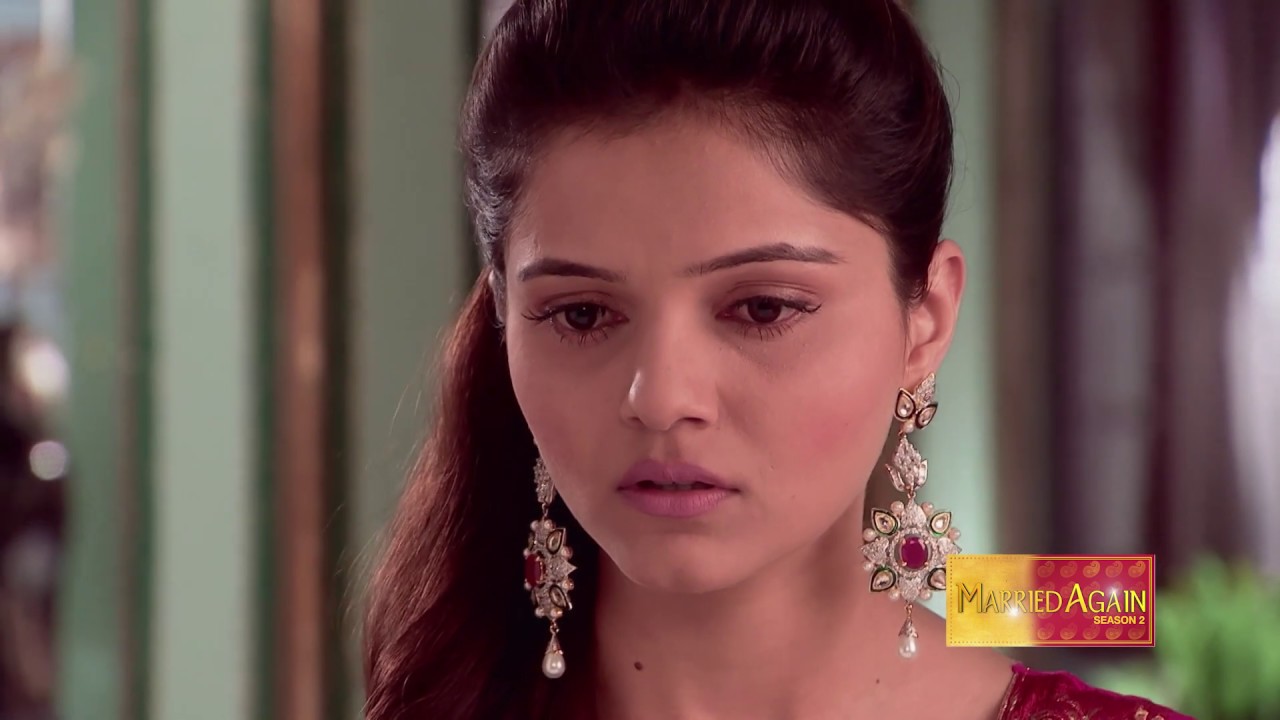 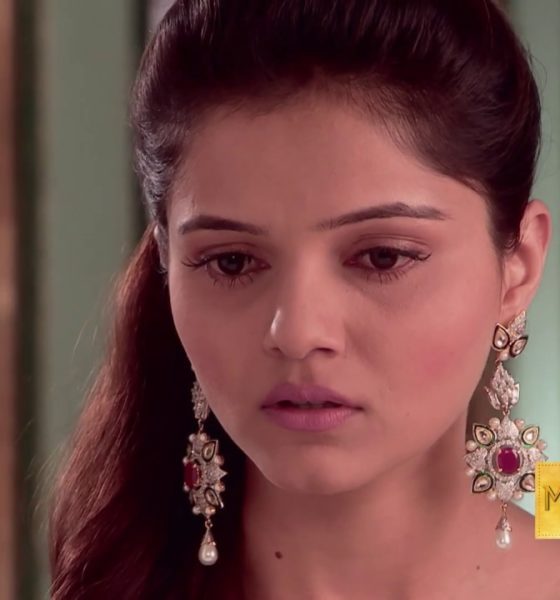 Married Again 30 November 2019 Update starts when Sarita cant believe what she just heard, when Divya says that she has come back for him only. Raj hugs her tight, saying that he loves her. Sarita is distraught, and sits down crying dishevelled. Divya says that she knows that he wanted to ask this only. When he nods, she says that she didnt forget one minute and waited for ten years, and when she came to his house, she got to know that he’s someone else’s now, and that he’s married. she says that with responsibilities, she went to Mumbai for her, She says that she never married or had an affair with anyone else, as her wait for him kept her alive

Raj asks what did he do, as he was forced into this marriage, by the emotional blackmailing of his parents. His life stopped there only, and he maybe married, but he always loved and will always love Divya. He says that sarita is just his repsonsibility

He says that he wants these ten years to go away, and only wants to be with her, and that he hasnt even touched sarita ever, as her Raj cant do this kind of a betrayal. He says that the contest is a reason for her to come to him, and asks if that is the truth. She nods, and says that she would tell the true reason for her coming there.

She tells him about Acharya Ji, who she revers, and she thought that when raj is with someone, and decided to marry someone else. But her guru, told that her life and love isnt with Gaurav, and that she would get married to the person, who she loved and waited for ten years, and that even the fate is in their favour. And so it happened, and her marriage stopped, and she left her pheras incomplete, for coming to him.

raj says that he too wants to stay with her, and asks what should he do, She tells him that her guru told her that by the next month’s Amavasya, Sarita would be with him, and she would die after that, and they can get married then. raj is shocked to know this. Raj refuses to believe this, while divya tries to convince him. She says that he would himslef believe it in the coming 30 days, when sarita dies off.

Raj asks her to shutup, and divya is happy to see him concerned about sarita. She says that he shouted at her for sarita, and asks about the relationship with him. Raj says that its nothing like that, and he wants to be with her, but not at the cost. Divya thinks that this fact hjas given him support to carry on with her mission

Sundari asks Sohan, if she knew the girl who loved raj so much, because of who he couldnt accept sarita. He says no and asks her to let him sleep. After he dozes off, she thinks that there’s some old connection between raj and Divya, and she would find out.

Sundari stealthily goes to Divya’s room, and even after knocking when she doesnt respond, she thinks that Divya has gone to sleep. When she opens the room, not finding her there, she thinks that Divya might have run away with Raj. The whole family is shocked, when they find that Divya is missing. sohan decides to call the police, but sundari asks him not to insult

She asks where is raj, and as he’s a friend of Divya’s. He decides to go to the shop. sundari also tags along. Granny says that ever since, choti bahi has come to their house, it looks like a new serial has started in their own house.

As the family goes to search for Divya, they are surprised when they find Divya, who tells them that because she didnt feel sleepy, she went out for a walk. The daughters get excited and decided to emulate it.

Divya thinks that if she had gotten a little late, they would have known about Raj and her. But the candle lit shop, shiela tells them that divya came yesterday, and everybody is pampering her like a Goddess, but the actual bahu of this hosue is missing, and noone’s bothered at all. while all are surprised and tensed too, Divya wonders where did sarita go. Her mother says that she may have run away, as noone

Kamla starts taunting. Sarita says that if she had to do it, she wouldnt have waited for ten years, and as it is, noone wants to come to this house. She says that she had a sprain in the leg.

Sarita wonders if she didnt make a mistake. Divya thinks that she wants to fill sarita’s life with colours, and that she is just a medium to get her closer to raj. She prays to the Goddess’s help to help her give everything that she has promised to sarita. and strength so that she can control her heart. Raj is very tensed at what divya said, thinking that he cant believe but he is actually missing sarita badly. He refuses to believe about the prophecy, but then thinks why would his divya lie to him, when she knows that he doesnt like lies at all. The screen freezes on his face.

Sarita says that she puts that aside, and asks what happened in that shop. She asks her what did he say about her impending death. divya tells her that raj wasnt happy at all, and got very angry, as he doesnt believe in this stuff. Divya says that she cant afford a mistake in this plan, and if it successful, then Raj would be sarita’s, anmd all they have to do is to make Raj believe this prophecy. sarita asks what if he doesnt believe.

Divya says that it wont go in vain, as Raj is his husband for 10 years, living them together, and some emotions must be involved. Divya says that in this country, everyone is emotional, when their loved ones is about to die. And once that happens, raj would be sarita’s and then she wont have a place in his life. Sarita says that she believes her, and gives her hand in hers.

The next morning, Kamla still taunts at sarita, about her lazyness. Granny asksher to be happy, as she got a chance to please Choti Bahu. while Raj too is working, the fatso and Munni gets Divya and excitedly ask about their makeup tricks from her. Raj remembers how he had taught Divya to dress up, as she complies to his sister’s wishes. Sarita finds Raj glancing and giving a longing look at divya, and is hurt. Divya too is conscious of Raj watching her.

Meanwhile, sarita steps slip on the stairs, and she is about to hurt herself, but is caught in time by Raj, and they end up in an embrace. All come hearing While Raj is conscious, sarita is happy, when Raj asks if she is hurt. Sarita says she’s fine. Whiel granny and others are relieved, kamla taunts her for spoiling the artifacts.

Raj says that living things are more precious than non living, but not many people realise that in the family. As Raj leaves, Sarita is very happy that raj spoke for her. Divya thinks that this is her first step to victory, while sarita is happy and smiles in herself.

Divya says that her love is worship, and has no place for conspiracies, and that even the Lord is on her side, and if this is happening naturally, then even the Gods want them to come close together. As she finds Divya in tears, Sarita asks if this is tears of happiness, or the pain of heart. divya is surprised. she says that she understands the pain of a lover.

Divya says that the wife’s love and devotion and sacrifice is far above a loves’s love, and that she being raj’s wife, she doesnt need to be afraid as she’s far ahead of a lover. Divya asks her to be hopeful of her success, and that they would be together soon. Sarita smiles.

Sohan and Kamla, are discussing Raj and Divya’s He decides to have a Munh Dikhayi Ritual for Choti Bahu, and he would spend so lavishly, that Choti Bahu doesnt want to leave this house ever. Kamla praises him on his smartness. He says that he would have to spend some money, to get some in return when choti bahu comes into the family with her wealth.

She finds a necklace embedded under the bed. Sohan takes it from her, and fuses her excitement. Kamla thinks that now she just has to think how to get Raj remarried to Divya.

Divya finds Raj exercising. Divya comes and says that she too would do Yoga along with him. They both are busy in their exercises. She asks if he’s upset about what happened in the morning, and reemphasises aboput Guruji’s prophecy. raj says that a similar accident happened with him too, Raj tells Divya that he gave thought to her words last n ight. divya asks what did he think.

He says that she has come back to rejuvenate the relationship, that couldnt commiserate due to circumstances. Divya is surprised and tensed thinking whether he’s talking of Sarita and if he has gotten to know their plan. He comes to her and wiping the sweat off her brow, Raj assures Divya that they can be together with each other in this house. He says that he wants Sarita’sDivya uneasily asks what does he mean.

Raj says that he thinks that the prophecy is useless, and nothing would happen to Sarita, and he asks for her help to get Sarita remarried. Divya is shocked and tensed to hear this. He says that her arrival is God’s sign that all three can live happily, while Raj and divya arte together, and sarita can move on with her new life partner. Divya thinks that what isnt possible, then why is he even giving it a thought.

Granny is very angry at the idea of the Munh Dikhayi. sundari too agrees and tries to advise him, but kamla agrees to Sohan’s statement. Sohan tries to make them understand, that they should keep a party for the fact, that they can find suitable suitors for shiela, who’s 22 now. Granny is excited to hear this, and agrees to the party.

As divya comes, He starts pampering and attending to her. Sohan tells Divya, about the party that he has planned to show Divya to his society, who are ever curious. Divya thinks that party menas lots of guests, and thats where the drama creates a twist, and this would be the perfect scene to get sarita close to raj. Sarita thinks that divya should say no, as she doesnt like where is sohan going with this. Divya is happy with her idea.