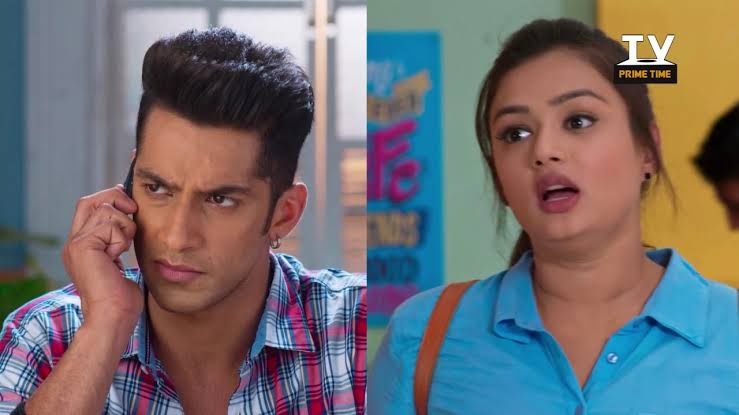 Mehek 13 November 2019 Update – At night, Mahek is lying in bed and recalls Shaurya saying that he loves her. She sits up. Swati wakes up and says what if he is saying truth? Mahek says I dont want to talk about it, she goes to sleep.

Sajita is awake in her bed, she gets up and thinks that I didnt trust Shaurya a bit but today I saw truth in his eyes, I saw Mahek calm down for a man for first time, what if Mahek have started liking that guy? Shaurya is sleeping in porch. Mahek sees his getting cold from her window. She brings sheet for him and tucks him, Shaurya holds her hand in sleep and murmurs I love you Mahek, trully, please dont leave me. Mahek looks at him and cant look away.

Sajita comes there and sees this. In morning, Shaurya wakes up and look at his watch. He sees water on table. He falls from couch and looks around, he thinks that this is a big mess. He gets tensed and thinks what happened last night? he recalls coming to Mahek’s house, making a chaos, Mahek threatening him and Shaurya confessing his love. He thinks that I made a fool of myself infront of my enemy, I cant even drink water, she might have mixed poison in it. Sajita comes there and gives him tea. Shaurya takes it. She asks him to sit down.

Shaurya does and smiles at her. She asks him to drink the tea. He nods and drinks it. He says tea is good, she says I know, this is ginger and tulsi tea, its good for you. She asks if he remembers what happened last night? Shaurya gets tensed. Sajita asks what was the meaning behind what you did last night? Shaurya looks away. Sajita says I am asking something. Shaurya says I.. Coach comes there and says dont ask him anything, he and his father wants to play with our emotions.

Shaurya thinks to control himself. Sajita says I want to ask him something. Sajita asks Shaurya if what he said last night is true? does he really love Mahek? and Mahek loves you too? Shaurya looks on.

Shaurya leaves. Arish says to Suvetlana kidney donor is arranged. she hugs him and says I am lucky. He says I am lucky mom. Sweeti calls Arish. Yuvraj says to arish you and your mom have to come to our function. Suvetlana says I will go.

Yuvraj asks Rashmi where is shaurya? She says here he is. Yuvraj says I have arranged a party for you. Mahek recalls her moments with shaurya. Mahek says this all is stupid for me.
Shaurya sits down. He recalls Mahek. Rashmi says to shaurya where did you go? He says party. She says lying? He says no. Ma please get me tea.

Yuvraj says guests are coming. Shaurya says we will come back before party starts. I promised ma I will go. Yuvraj says come back fast.

Swati says to sajita you think this is right ma? Sajita says yes distract mahek. I will go to shauyra’s house and talk to him. Mahek and Swati come out to eat chaat.

Mahek says I am eating this after so long. Coach sir dont’ let me eat anything tasty. Swati says that’s why I brought you here.. mahek says remember when we came here first? She recalls how shaurya hit sajita. Swati says lets go and eat paratha.

Yuvraj welcomes Suvetlana. Yuvraj says where has that Shaurya gone. Yuvraj sees Sajita. He says why are you here? She says I want to talk to Shaurya. Yuvraj says don’t waste time. My son wont meet you. sajita says for kids we have to forget all this. Yuvraj if you are talking about boxing forget about it. She says I talking about something more important. Last night Shaurya came to our house and said that he loves Mahek and wants to marry her.

Yuvraj is shocked. Suvetlana also hears. Yuvraj laughs. He says wow you colored this party. Come in. She says what are you doing leave my hand. He pulls her in the party. Yuvraj says there was an announcement for you all. We have our son’s mother in law to be here. My son Shaurya. Her name is Sajita. Lets hugs and celebrate. Sajita shoves him. Yuvraj says no no this isn’t the way to start the relationship. play a song I and Samdhan ji will dance together.

Sajita says let me go. He pulls her hand and dances. Yuvraj takes off her dupatta. Sajita is crying. Mahek comes in. Shaurya comes in too. Yuvraj is saying here is my samdhan. Mahek pulls Sajita aside. She comes in front of Yuvraj. Yuvraj says you want to trap my son? You are the slipper of my feet. Shaurya says enough dad. What are you doing. Yuvraj says I am drunk but this girl wants to trap you and I wont let that happen. Disgusting women. For money they can do anything. Mahek slaps him on face and he falls down.

Mahek hits Yuvaj and says how dare you touch my mom. He falls on the bar. Mahek keeps punching him. sajita says please stop Mahek. Mahek says today I will tell you who am I. She hits him with bottle. Mahek keeps eating him. He is badly injured. Everyone stops her. Mahek picks a broken glass to stab him. Rashmi says I beg you mahek please. Mahek says leaving you just because she requested. Otherwise I would beaten you more. Mehek 13 November 2019 Update

Mahek leaves. She says to Sajita why did you come here? That Shaurya said something when he was drunk and said that and you came here? Did you ask my choice?And swati you.. You couldn’t also see? He is like his father. Shaurya says mahek listen.. She says don’t dare saying a wordd. Go to your dad. He says dad did very wrong. i apologize to you aunty. Mahek says ma lets go. Shaurya says you have to talk to me.

Shaurya says I love you. Mahek says don’t do this drama in front of me. You can’t fool me with your acting. You can’t trap me like city girls. i know how cheater you are. I don’t even wanna see your face. If you love me do.. and die. I dont’ want you in my life. Mahek says I dont’ talk to disgusting people like you. Mahek says I don’t talk to disgusting people like you. She leaves. Shaurya comes in. Dadi says didn’t your blood boil when I saw my dad doing these disgusting things. My blood boiled when I saw him insulting that woman.

Shaurya asys my blood boiled when I saw him misbehaving. DAdi says mind your language. Yuvraj says its okay ma. Sit here with me. Shaurya says I am disgusted to be even near you. I can’t even breathe in front of you. Dadi says you are speaking her language. she did this magic on you.

Shaurya says you think women are noting. He breaks his photo with Yuvraj. Shaurya says you don’t even deserve to be a woman’s slipper. and dadi you.. You are a woman and you support him. Its your mistake. Dadi says don’t be so mad at your father. Shaurya says because you are disgusting. Yuvraj slaps him.. Sharya holds his hand and says stay away from me. I will never forgive you for what you did. He leaves. Suvetlana is in car. she says Mahraj I have found the way.
Sharma is angry.

He says to swati you should have told your mom not to go there. Shaurya knocks on the door. He says Mahek please open the door. Sharma says ignore him. Sajita says please listen to him once. Mahek says he wont come in. She locks the door. shaurya says mahek please open the door. I will stay here. Mahek says I don’t care about you. Go from here if you have any shame. Don’t be a trouble for us. Shauyra walks outside and recalls what Mahek said. Mahek is crying too.
Dadi gives Yuvraj milk. she says do something. Your son must be in chandni chowk.

Next morning, Sharma says mahek get ready. We will go to college. Door knocks. Police comes to their house with Yuvraj. Dadi says arrest him. Inspector says come with us to police station. Yuvraj says she attacked me in my house. Suvetlana comes and says stop. Yuvraj says you here.. She says Mahek and her family didn’t do anything. Mistake was Yuvraj’s. Arrest him. She says this man misbehaved with Sajita. Any woman would have supported her. And any woman would have attacked in return. I am eye witness.

Mahek and her family are innocent. Inspector says who are you? She says I am Suvetlana and I was in that party. I am sponsoring mahek for asian games. Everyone is dazed. Suvetlana says anyone would attack if you misbehave with their mother. Sajita says we don’t wanna complain. Let it be. Mahek says ma what are you saying. Suvetlna says that’s my choice. She says inspector we don’t wanna file a complaint. Inspector says t Yuvraj don’t dare doing anything like this again. I can arrest you for filing a fake complaint. They leave.

Yuvraj says you can’t change. You had to sponsor shaurya. Suvetlana says after what you did I will never sponsor disgsuting people like you. I will support Mahek. Suvetlana says I am disgusted that Sweeti has a father like you. Mahek and her family suffered from your hands but they still didn’t complain. Mahek is a better boxer than Shaurya. Yuvraj gets angry. He says you aren’t doing right. Dadi takes him from there

Rashmi takes shaurya to arti. He says you love Mahek right. Shaurya asys she doesn’t even wanna see my face. She is justified. Yuvraj comes and breaks stuff in anger. He asys you should have thought before messing with me suvetlana. Sweeti says are you blaming her for your mistake? Yvuraj is about to slap her. Shuayra holds his hand and says don’t dare touching my sister. I am glad for mahek. she deserves this chance and you will watch it.

Mehek 13 November 2019 Update – Dadi says she is a girl. You have gone mad for her. Shaura says your son is he mad one. My father is disgusting. Yuvraj leaves. Shaurya asys ma you are right. I will talk to mahek. I will tell her how happy I am for her.