Married Again 15 December 2019 Update starts Sarita is very tensed, when kamla approaches her for reachging so late, as she has to bear her for just the next two days, after which shiela shall get married, and she would be out of the house. Sarita remembers rohan’s mother’s talks, and decides to go to raj first before taking a hasty step again. Granny tells her that raj has gone to the bus stop to pick up guests. (Read Last Episode)

As sarita sits, granny laments that ever since she got raj by her side, all kinds of wrong is happening, and she wishes that sarita be very happy. She asks her to go sleep. Sarita says that granny has always taught her that after every trouble, there’s happiness around the corner. she asks granny not to bother and sleep. She leaves.

The next morning, sarita is waiting for raj, as he couldnt talk to him last night. Hearing raj kickstart his bike, she goes to him, but is hesitatnt to talk. Seeing him smile, she gets conscious and asks what happened. raj caresses her and asks where was she last night, and if she found anything. She is about to say something, but kamla steps in saying that he has to go to be a part of the puja that rohan and his family have kept before the marraieg, at the kuldevi mandir. He is hesitant, to hear sarita before he leaves, but kamla forces him to go. He finally leaves. sarita thinks that rohan’s house would be deserted and she would be able to surf for some more proof.

Kamla is highly unhappy not being able to find sarita there. While munni is excited to dress shiela for the occassion, kamla hopes that sarita doesnt create anymore drama.

Raj, unwillingly is a part of all the rituals, while rohan is happy at his discomfort. His mother eyes raj doubtfully, while they do the puja. They are also joined by kajri ji, who drapes herself before raj can see her. Rohan’s mother is surprised to find kajri there. She is tensed as she finds raj too curious seeing kajri there. 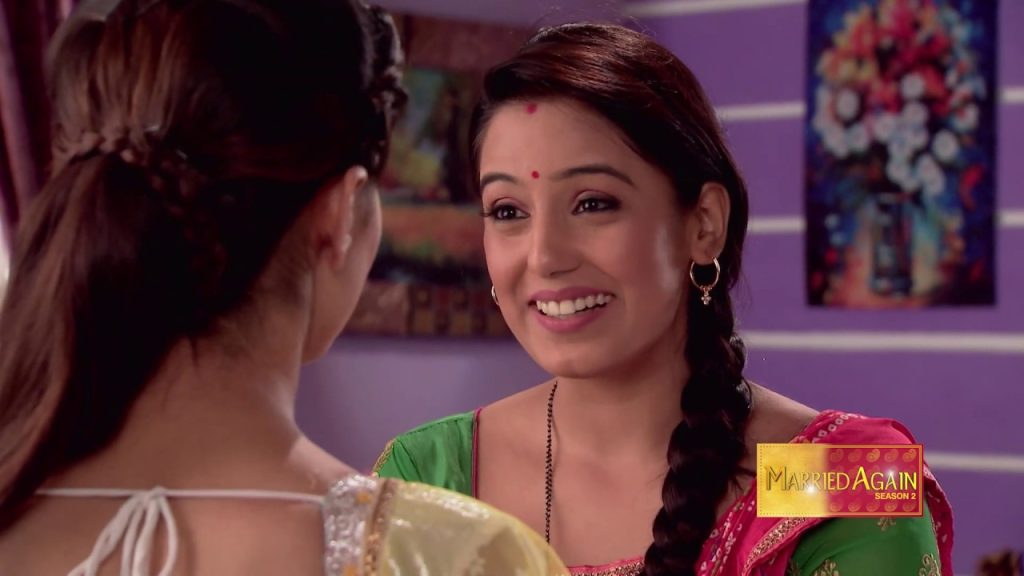 Rohan too gets tensed. raj says that he doesnt want sheila to be with rohan and hopes that something can happen, and asks the Lord to help sarita in getting a proof that may enable them to expose rohan and his family to their family. She asks kajri why is she here. Kajri says that she would come in every ritual as its their joint descision. As raj is about to leave, rohan’s mother asks why the haste.

Raj says that he has to prepare for the marriage. Rohan’s mother says that they too are waiting, and asks if sarita is still unhappy about the marriage, as she could have had the chance to sit on the mandap instead of shiela today, if rohan hadnt rejected her. She asks him to tell sarita not to worry, as she would find her a wonderful groom too. Raj says that she shoudlnt bother as sarita is lucky that she isnt marrying someone like rohan. as raj leaves, she is tensed.

Married Again 15 December 2019 Update continues as Sarita tells the servant that she has been sent by rohan’s mother to look for a ring that they left for the puja. She asks the servant also to go into a different room and start searching. He complies. Sarita is surfing around for proof that can prove that rohan and kajal are still happily married, and she can expose rohan’s lies and finds their marriage album, along with the marriage certificate.

The servant comes and is surprised to find papers strewn apart. He is about to call rohan, but sarita says that she found the ring, and asks for some water. The servant leaves. She is oblivious of the fact that rohan too has approached the house, and is entering in. While the servant is back with water, he is surprised to find sarita gone. sarita stealthily walks out. Sarita senses something and is tensed, as rohan walks across the room. She hides herself while rohan walks past, and thanks the lord for helping her go unnoticed.

While the servant tells rohan about sarita being there, rohan slaps him saying that his plan is wasted due to him, and that he’s definitely out of the job. He rushes out to catch sarita.

As raj comes back, he absentmindedly tells kamla about the puja, while his eyes keep looking for sarita. kamla tells him that sarita isnt here, and goes from there bumbling about her. raj thinks that he knows that she’s gone out for some proof, and even after such insults she’s thinking about the family, and that her mission is to save shiela. He is calles by shiela, who’s dressed as a bride. She asks how is he looking. He says that she’s looking very pretty. On being asked for, raj gives her blessings to remain happy always, in her marital life, and she’s never in pain.

She asks if he still believes in sarita, and is confident that she would prove to be a liar. raj says that he and sarita only want her to be protected and happy. he hugs her and pats her on the head. He goes inside to get changed.

Later, shiela is informed by munni that the Baraat has come. shiela rushes out excitedly to find her family happily greeting rohan and his family. raj is asked for sarita from rohan’s mother. She taunts him by asking wht work is more important for her than her sister in law’s marriage.

Kajri tells a tied sarita that she wanted to enjoy every ritual, but cant due to her. She asks her not to think so much of herthat she can never be a mother, and therefore sarita cant even understand what she’s going through. kajri gets emotional saying that a heir is needed, and hence this marriage is happening, so that shiela can sire a son, as kajri coulod never be a mother. Sarita asks how can she spoil shiela’s life for this.

Kajri says that they cant do anything else, as his mother would have thrown her out otherwise. Sarita curses her for being so cunning. Sarita says that even surrogacy can sire a child. kajri says that such things happen in big cities, and once in a small city like this, she’s branded infertile, the stain would remain on her always.

She tells her plan that once shiela is pregnant, she would be taken to her native place so that the world can assume that she got pregnant, and she sired a child, and then shiela would be thrown out of the house and their lives too. sarita says that she cant believe a woman can stoop to this level. kajri says that she thinks about herself first, unlike sarita.

Married Again 15 December 2019 Update ends as Some goons come and ask whats to be done, as they have been sent by rohan. as kajri is about to leave, sarita says that she cant do this. Kajri asks the goons to shut her up. They comply. she tells the goons that they should kill her, if she tries to run away. The screen freezes on sarita’s tensed face.