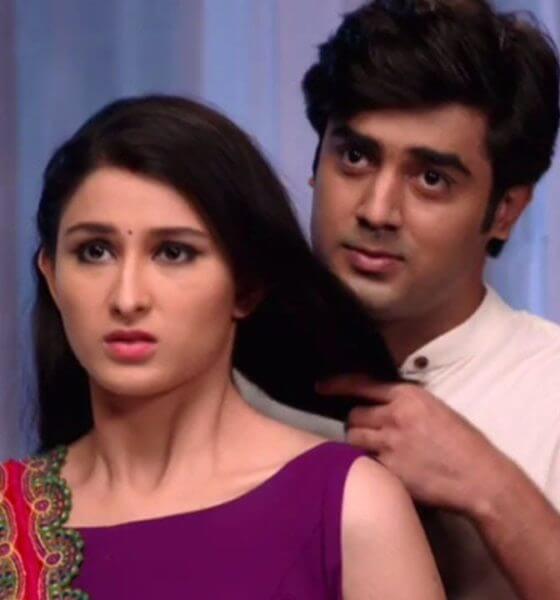 Deception 21 January 2020 Update begins when Pooja bringing Naren home from brothel. Supriya asks Naren if he realizes from where he returned and says I never scolded you as I thought you are matured enough. She asks Mayank to take him to room and says he hurt us a lot. Mayank takes him to room. Supriya cries. Pooja consoles her.She looks at Rahul and gets doubtful seeing him tensed. Harish calls Rakesh and asks him to shift to his house, and says he told everyone that their house will be getting redeveloped. Rakesh says what will happen if we shift there.

Harish says it will be a big support for me if you stays here and asks Rakesh and Harsha to shift immediately. Pooja comes to Rahul and says you can’t take advantage of Naren until I am here. She says I know you took Naren to Rang Gali and says before Harish comes to know about this, mend your ways, else you and I, both are here. Rahul asks will you stop me? He says everybody failed whoever tried to make him alright.

Pooja says he is fine. Rahul asks who are you and why you are concerned about your boss. Pooja says you didn’t answer me the reason behind applying cake on my face, like wise I don’t think I shall answer you. She says my eyes will be on you. Rahul is tensed.

Pooja comes to Naren’s room and sees him sleeping. A song plays…..jogiya…Naren asks her to give warm water. Pooja asks him to get ready in 10 mins and says we are going. Naren asks where? Pooja shows him farm things, plough etc and asks him to wake up. He asks her to come to point. Pooja says you are resting here leaving your animals in NGO and asks him to get up. Mayank hears her and thinks she cares for him a lot, and thinks but why she is scolding him. She says she is talking about making shed.

Naren says I have no savings to make shed again. Pooja says we have to earn the money and asks him to come, as she got all the stuff for organic stuff. Mayank thinks to check what pooja is doing in his room and tries to climb up to Naren’s room to hear them. The stairs fall down. Naren and Pooja come near balcony and see him hanging holding balcony. Naren and Pooja help him come up. Pooja says we shall find good work for him. Pooja and Naren are leaving for farm. Supriya gives them aarti and says she prays that they step on right path. Naren also takes aarti. Pooja asks him to come and says we have to earn money to build farm again. Rahul is shocked. Supriya asks Mayank to have food. Pooja says he is fasting today and says even Mayank will work for his brother today. She takes Naren and Mayank to farm.

pr*stitute Chandani thinks of Naren and is angry. Rahul calls her and provokes her against Naren. Chandani asks him to bring Naren again and says once he comes here, I won’t let him leave. Rahul says your aada shall become his habit. Chandani looks at her ghungroo. Rahul thinks once Naren gets trapped by chandani then…

Pooja tells Mishra ji that Naren will give him update. Naren talks to him. Mayank says bhai knows much about farming. He asks when we will bring animals from NGO. Pooja asks him to bring Shed’s insurance papers. Mayank asks Insurance. Pooja says Insurance will help us. Mayank tells Naren that Pooja is scolding him like a teacher. Naren laughs. Pooja asks him to work.

Later she serves food to Naren and Mayank. Naren asks if she haven’t brought sabodana. She asks him to have it at home and says if you don’t have this food then you will fall ill, have to work hard at home. He coughs. She pats on his back. Naren asks why she is hiding her hand and asks her to show to Doctor. Pooja says she is fine and asks him to ask Mayank.

Rahul is keeping eye on Naren’s farm from far through binoculars. Mayank tells Pooja that 25 kgs vegetables are grown in his farm. Naren says he don’t sell, some of vegetables are used in house and some, he gives to the needy. Pooja says she saw in Dehradun Mall, and says Organic items are sold at double prize. She tells that sometimes we have to think about ourselves. She asks him to think about his animals. Rahul thinks this naukrani is stuck with him, and thinks how to make her go far. Just then she hurts her injured hand and sees blood coming out. She hides her hand. Rahul smiles and thinks now Bhai will come out of Lakshman Rekha.

Naren getting Rahul’s call and he asks if he is fine. He asks about Pooja and says she has a deep wound. Naren checks Pooja’s hands and sees blood coming out. He asks if this is a small wound. Pooja says we can’t stop living due to a small injury. Naren asks her to visit Doctor. Mayank says I will take her. Pooja thinks I don’t want to leave you alone, but can’t refuse you. They leave. Rahul thinks Chandani will take care of Naren now. Naren thinks if Pooja have something.

Kusum asks Rachel about Rachel thinking her to be Ritu. Rachel says she traps guys and tells that she has trapped Anuj. She says Pooja knows her and had defeated her in dance class. Kusum gets angry. Naren sees Chandani crying and talking to Rahul. Chandani sees him and runs as per plan. Rahul tells Naren that Chandani wants to die being lonely and asks him to counsel her for humanity sake. Naren falls in his words.

Doctor bandages Pooja’s hand. Pooja thinks about Naren and asks Mayank to go back to farm. Doctor checks her wound and says it is deep. Pooja says she have to go as her boss is alone and asks him to make a small bandage as her boss gets afraid seeing big bandage. Mayank thinks how can she be so dedicated and thinking about Naren. He thinks her concern is genuine.

Rahul brings Naren to Chandani’s brothel and keeps his phone. Mayank goes to do the payment. Pooja calls naren. Rahul feels pity on her and says what you will do, I have brought your boss here from under your nose. He asks Naren to go to Chandani’s house. Chandani looks at him from balcony and says that girl took you away from here, and says you are welcome here. Pooja is restless and asks Mayank to come in auto, as time will waste if they wait for taxi. Rahul asks Naren to save Chandani’s life and talk to her alone, and says her life is in your hands now. Pooja calls Naren. Mayank asks her not to take tension and says he might have forgot phone somewhere..

Pooja comes to the brothel and sees Chandani shedding fake tears. She asks him to return and says today she can’t perform. Naren says he came to share her pain. Chandani asks really. She signs someone to sign Rahul. Rahul thinks what you will do Pooja? Pooja thinks I hope Naren is fine and is worried. The woman mixes some medicine powder in the drink. Rahul goes inside and takes Naren’s pic. He thinks he will show pics to Vyas family and ruin him. Naren asks Chandani why she is sad. Chandani says she didn’t get anyone to share her sadness and says love is an impossible thing for us. She asks where are those people who have a real heart. Naren says this is life.

Chandani says I will die one day and says it is best if I end my life with my hand. Naren asks her to peep in her life and tries to motivate her for life. Chandani holds his hand and says somebody came here to become my humraaz. Suddenly Naren sees some toy and asks Chandani.

Pooja comes back to farm and asks Mishra ji. Mishra ji says he left after you left. Mayank asks her not to take tension. Pooja is worried. Mayank apologizes to Pooja for being rude with her and says I thought you wrong. Pooja says even I doubted on you, and says you are not bad. She calls Naren. Mayank says I will call him. Rahul dances with the other dancer.

Deception 21 January 2020 Update ends when Chandani tells Naren that she will see whose toy is this and asks him to be there. She goes to room and asks little girl to come out. Naren also comes there. Chandani scolds the girl and asks her to understand that her destiny is not like other kids. Naren asks if this is your daughter. Chandani pretends to be shocked