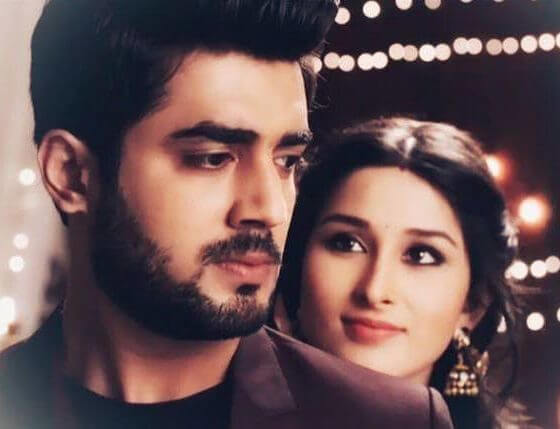 Deception 27 January 2020 Update starts when Pooja asking Harish to give love to Naren and says your love can change him and asks if you are ready to promise me. Harish promise her. Pooja says I will go home and pack my stuff. Harish says your stuff is already packed and kept in the car decky. He offers to drop her home. Pooja says I didn’t know why you have taken this decision, but I am sure that this decision is taken for Naren’s betterment. Harish folds his hand and feels bad.

Naren is upset and recalls Rahul saying how can Pooja lie that she is Naren’s wife, Pandit ji’s words etc. He looks at the dress which he bought for her. Mayank comes. Naren says I wanted to thank her and that’s why bought dress for her. He says may be she helped me for gifts. He asks him to give this dress to Pooja and asks her not to come in his space again. Mayank says I will not do this and says I have learnt this from you. Pooja is walking towards Satish’s house and reminisces Naren. Song plays.

Anuj gets happy seeing Pooja. Satish asks Pooja why did she come suddenly. Kusum asks with her stuff. Anuj says she cares and must be worried for Papa. Satish says I am not much unwell that you have to come here leaving your job. Pooja says I was missing you all. Satish says you did right to come back. Satish says Vyas family is good and says I will not stop you again from working. Kusum feels that Pooja is lying.

Harish tells Supriya that as Pooja wanted to return, he left her. Harsha says she didn’t tell us. Neelima says she would have informed us and calls her selfish. Harish asks her to stop it and says Pooja will never return. Kusum asks Pooja what did you do that you are fired from the job. Pooja says nothing. Kusum says I know everything that their concern was fake. She says I will ask Supriya. Anuj says I agree with mum and argues with her.

Supriya asks Harish to tell what is the real reason of pooja leaving the house. Harish says I have fired her from the job so that Naren’s life get better. Supriya asks how this thought came in your mind. Harish tells him that Neelima made him meet a sant baba who asked him to keep her away from Naren. He says when you meet him, you will realize his healing touch. Supriya says I don’t believe him. Supriya says no Guru ji can change him. Harish asks her not to tell anything to Naren and not to contact Pooja in any way.

Mayank calls Pooja and asks her to reach rang gali, says Naren is angry as he came to know that you lied to Pandit ji. Pooja gets tensed. Naren comes home and asks Servant to ask Pooja to meet him. Neelima hears him and says how will Naren react when he comes to know that Pooja left. Naren says Pooja have to answer and calls her. Pooja sees his call, thinks of Harish’s words and don’t pick the call. Naren thinks why she is not picking the call. Pooja thinks how I will lie to him and cries. Oh Piya plays…..

Naren is restless in his room and imagines Pooja standing on the stairs. Malanga re plays……He gets up and runs to her. He holds her hand and asks where were you? When I called you, you didn’t pick the call and asks why did you lie to Pandit ji. He asks her to accept the mistake and says I am asking you something. Pooja asks him to calm down and says who will take care of you if you get angry. He asks why did you do this with me.

Pooja asks can I do something bad with you and asks him to ask his heart. She says I will leave now and asks her to take care of himself. She leaves. He wakes up and it was his dream. He shouts Pooja. Pooja wakes up calling Naren. Naren comes to Pooja’s room. Rahul asks why did he come here at this time. Naren says I came for Rahul. Rahul provokes him against her and says she left the job. She asks why you are burning your heart. Naren gets furious.

Pooja wakes up and checks her phone. She thinks of Naren’s words. Naren lights the fire wood and thinks of the recent happenings. He picks the hot ashes and applies on his body. Kahan Jaye Tu Malanga Re. plays.

Rachel reads in the newspaper that a man’s family got him admitted in the hospital proving him mad and he committed suicide due to frustration. Pooja thinks of Naren and gets shocked. She snatches newspaper and gets tensed. She tells Satish that she will do breakfast in her room and goes.

Naren is in his room after punishing himself. Supriya comes there. Naren thinks Pooja came. Seeing Supriya, he gets angry. Pooja thinks to call Naren. Anuj takes the phone and asks what is the matter? He asks her to forget the family and do a new job. Pooja says they are good people. Anuj asks her to become his old Pooja ji, else he will feel guilty. He asks her to promise and deletes their contact numbers for him. Pooja deletes their contact numbers and gets teary eyes. Naren is still punishing himself.

Mayank gives invite from mahila samithi to Naren and says you have tried to make the children’s life better and that’s why they want to give you award. He says this became possible as Pooja lied. Servant comes. Mayank asks him to go home as his son is unwell. Servant goes home. Mayank tells Naren that he lied to Manoj to stop him from falling down the table.

He tells that Pooja lied for children’s betterment. Supriya says if Naren is getting award then it will be for his achievements. She tells him that Pooja didn’t leave the job, but was fired. Naren is shocked and asks whom? Papa. Supriya nods. Naren looks on angrily.

Pooja comes to give her interview. Interviewer checks her resume and says nice. Naren comes to meet Harish at Guru ji’s place. Neelima and Rahul are already sitting there. Harish says you both are here? He introduces them to Guru ji. Naren asks why did you kick Pooja out. Harish says she was not needed anymore. Naren says she was a helper and asks did you ask mom once. Harish reminds him of the contract clause.

Naren says why did you do this, when you have brought her here. Harish says I kicked her out. Guru ji asks Naren to talk calmly. Supriya asks him not to interfere. Harish scolds her. Naren says I don’t want to argue and says I am bringing Pooja now, asks him not to tell about the contract. Pooja tells that she wants job outside Dehradun and Hrishikesh.

He asks her to go to Delhi for the job. Neelima and Rahul ask Guru ji to take Naren to math and says if Pooja comes here, then she won’t let you Naren go with you to math (embracing sanyas). Guru ji asks them not to worry and says Pooja is going far from him and tells that he will take Naren from under their nose.

Pooja tells that she is leaving now as she has to join tomorrow. Rachel thinks she gets job easily and fast, have to learn her nuance. Pooja is in the bus. Naren is driving his bike and coming to Dehradun. Pooja bends down to pick her phone. Naren sees her and calls her name asking her to stop the bus. Pooja asks him to return. Naren stops his bike infront of bus. He gets inside the bus and asks her to come.

Deception 27 January 2020 Update ends whenPooja asks him to return and says I can’t come with you, as I got a job in Delhi. Naren says you will not work there. Pooja asks driver to start the bus and says we can’t stay in one place. She asks him to drive. Malanga Re plays……Pooja is sad.