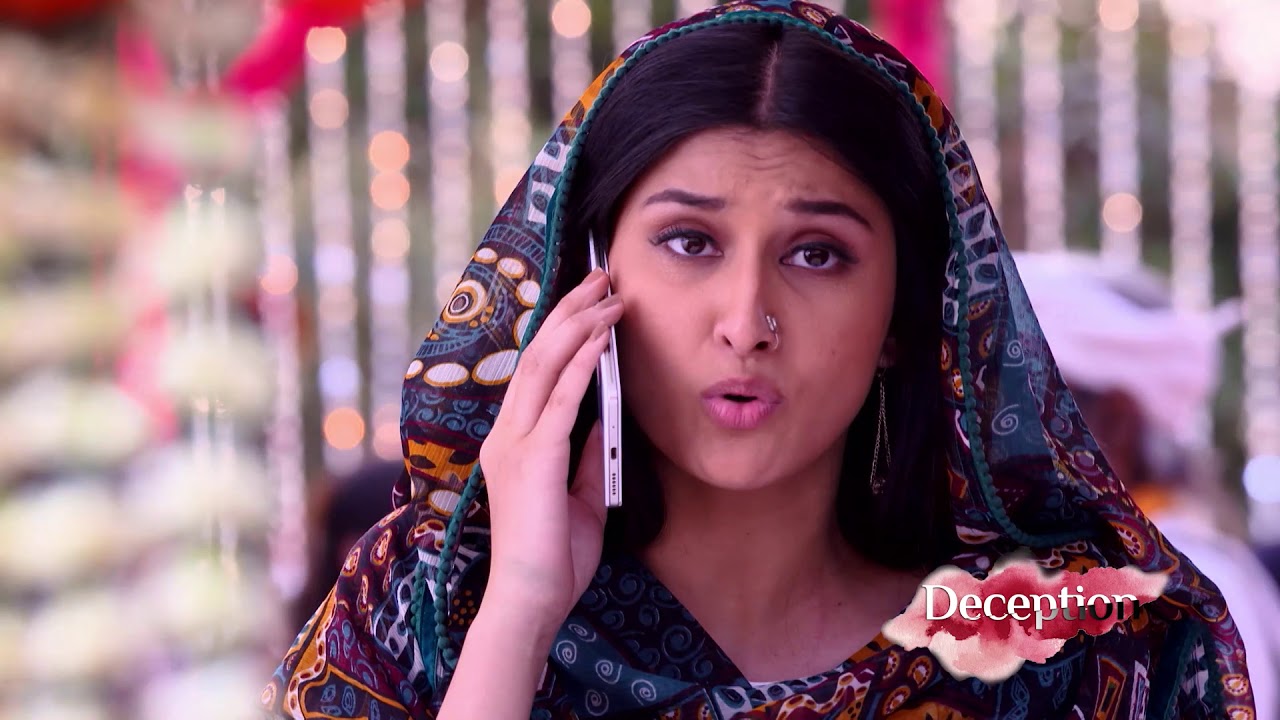 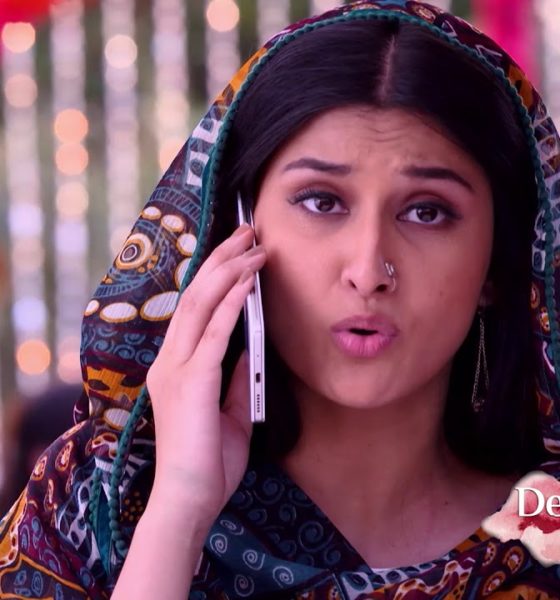 Naren calls Pooja. Mayank and kids come there. Naren says you all. Mayank says we came to convince her along with you. Pooja thinks about Naren’s words, goes to Satish and holds his hand and says I need something, will you refuse me. Satish asks her to tell. Pooja says she wants to return to Hrishikesh for a day. Satish looks on. Just then they hear Naren knocking on the door and he asks her to see who came to convince her. Kids calls her.

Pooja tells Satish that Naren got his destination and says may be he will lose it because of our ego. Kusum asks her not to go else she will break her legs. Naren knocks on the door. Anuj asks if this man is mad. Satish tells Pooja that if she thinks she shall go for a day then she can go, and says I will not ask you question. Anuj says you are saying this. Satish says they kept her with so much love and we can’t behave this way. Kusum warns Pooja again and says one day means one day.

Pooja opens the door and smiles looking at them, says Mama permitted her to go only for a day. Naren looks at her with teary eyes. Malanga Re plays…..He goes inside and hugs Satish, thanking him. Anuj says I will also go with her, so that I can drop her to Delhi after function. Naren folds his hand.

Harsha tells Supriya that these jewellery are of your marriage. Supriya says I don’t wear heavy jewellery, and says I have promised Pooja’s mami that they will pay for Satish’s treatment. Harish says no need to sell jewellery and says they will give money for Satish’s treatment from their company account, and asks Rakesh to pass Hardik’s cheque. Hardik says he don’t want his favor and tells that no cheque will be given to Pooja for company account. Fraud Guru ji comes and says if you are okay if grah lakshmi’s jewellery is sold.

Naren is driving his bike. Kids call his name. Naren smiles looking at Pooja. Harish thanks Guru ji for accepting his invite and coming to stay in his house. He asks Neelima to take care of him. Neelima nods. Guru maa asks Hardik not to hurt Bhabhi and says she is not less than a mum, and asks Supriya if he is saying right. Supriya doesn’t like Guru ji.

Guru ji keeps the jewellery in the box and asks her not to sell jewellery and says it is symbol of married life. He says if a woman cries in the house then that house will never blossom. He calls Maa to Supriya. Supriya says you are welcome here, but we trusts on Kanha ji only. Later she talks to someone and says award function is kept at home. Naren sees Supriya and is tensed. Supriya smiles.

Naren holds her hand and asks her to come. Harish is shocked to see Pooja. Supriya hugs Pooja and says sorry. She asks Naren to change his clothes as award function is going to start. Harish looks angrily. Supriya tries to talk to Harish. Harish says I am not interested in this award function. Guru ji pats on Rahul’s shoulder and they eye Pooja.

Mahila Samithi woman appreciates Naren’s work and everyone claps for him. Naren comes and sits with Supriya. Mahila Samithi people tells that they want to welcome his parents. Naren asks where is Papa? Supriya says some people are unlucky. Naren holds her hand. Supriya goes on stage. Gudiya says mum said where do we find people like Naren.

Chandani smiles. Mahila Samithi woman asks Naren to come on the stage. Naren gets up and takes Pooja with him. He says he wants to say that he is not responsible for this award alone and says Pooja is also equally responsible for his work. Chandani gives them award. Naren and Pooja receive it. Chandani thanks Pooja and Naren and says you became angels for us.

Naren thanks them for giving chance to them. Everyone claps for him. Pooja hugs Chandani. Naren gives interview to the media. Guru ji talks to Pooja and says I heard much about you. He tells something which is muted. Harish sees Naren and goes.

Later in the night, Pooja hears Neelima and Rahul talking to Guru maa. Neelima says that girl returned again and says I am worried. Guru ji says if you had done nice farewell then she wouldn’t have returned. Pooja is shocked and says they are together. Guru ji says she returned as Naren went to call her. He says it is okay, as Pooja is going far from here. Pooja will be in Delhi and Naren will be in my control. Rahul asks about Naren. Guru ji says once Pooja goes, we will shift Naren to math, and says once he reaches there, then it is impossible for him to escape from my captivity. Pooja is shocked and thinks she has to save Naren. Deception 28 January 2020 Update on Zee World

Pooja hears Guru ji’s evil plans to trap Naren. Neelima and Rahul smiles. He hears footsteps and gets alert. Harish comes there and asks can I come inside. Guru ji says I know you are worried. Harish tells that as you said, I asked Pooja not to come, but Naren brought her here. Guru ji asks him to sit and asks Harish to sit. He says Naren’s heart is innocent and asks him to give him a chance to let Naren stay in his shelter. Harish nods. Neelima and Rahul smirks. Pooja gets shocked and recalls hearing his words. She thinks what does he mean? Why they want to trap Naren.

Anuj comes there and asks Pooja to come, and says Cab came and tells that in the morning, you have to join. Naren asks them to stay and says they will drop him in the morning. Supriya comes asking Pooja to stay in the night, and asks Anuj to agree. Anuj says he will book 5 am cab. Naren goes to make her room ready. Neelima comes to Pooja and talks sweetly, says she is so proud of her. Rahul gives her experience and character certificate and says it will help you. Pooja thinks they don’t know that I know their truth.

Supriya asks pooja and Anuj to have food. Anuj says we will manage? Naren asks them to come. Pooja nods and says I will serve food. She serves food to Harish, Guru ji, Naren, and others. Guru ji says I have visited the world, but haven’t seen man like Naren. He invites him to his math and says I will learn so much from you and even my shishya will be happy. Naren says sure. Pooja gets worried. Later Pooja sees Guru ji. Guru ji calls her.

Pooja smiles and says do you want to tell something. Guru ji says you loves your mama and mami well and took job in Delhi. He says you are getting a good salary of 40000 Rs and a place to stay. Pooja thinks how did he know? Guru ji says life don’t works on imagination etc. Pooja thinks Guru ji says opposite things on dining table for Naren. She says you are right and taunts him for seeing the dream of building his Ashram in many acres of land. Guru ji gets angry and says you have to go far.

Naren asks if it is necessary to go and asks her to work there. He says I know Papa has fired you, but you can work with me and help me in kids studies, farm expansion etc. He says I can’t give you much money, but I will do the best and Maa will be happy. Pooja recalls Kusum’s words and cries. Naren says fine, it is good that you have taken a decision, I am going to Guru ji’s Math in the morning to meet his shisyas. Pooja is shocked and turns to look at him. Naren leaves from there.

Neelima asks Guru ji if he is sure that Naren will go with him and asks what will happen if he goes with you. Guru ji says he will captive him and asks them to rest, as tomorrow will be new morning for them. Rahul gives him cheque and says it is first installment for your math. Pooja gets tensed and thinks about Guruji’s dangerous plan. Naren searches for the book in his study room and thinks I told her many times to stop, but she didn’t stop. He gets restless. Pooja writes letter for Supriya and thinks to warn her. Naren angrily paints the wall with different colors.

Next morning, Pooja hugs Supriya as she is leaving and gives letter in her hand, saying she didn’t get chance to talk so that’s why wrote letter. Supriya asks what is in it and opens the letter. Pooja is tensed. Supriya reads the letter and says you thanked me. Pooja is shocked and thinks who changed this letter. Deception 28 January 2020 Update on Zee World