Gangaa 14 January 2020 Update starta as everyone is excited as Dai Maa brings Ganga. People gossip they took their first daughter in law in arms. Savitri strictly warns them not to be late again. Ganga comes to sit beside Shiv, her foot touches with Shiv’s who reacts at once. Savitri announces to begin the Pooja. There was Gath Bandhan, Thumpki whispers something in Radhika’s ears. The couple stand up. Savitri notices Shiv was upset, and tells him to unveil the bride as per ritual. He thinks about Parvati.

Savitri again takes his attention, as he removes the veil off Ganga’s face. Ria was happy and notices Kushaal staring towards Ganga. Thumki was left open eyes, Aashi thinks Ganga is really pretty.

Shiv removes her earring off his pants, and returns it to her. He says these are his family jewellry, she must take care of them. Shiv hurries them for Grahpravesh. Ria does their aarti and tells Ganga to push the kalash before entering. Thumki places the color pot for finger prints, she points towards Parvati’s foot prints saying no one can take Parvati’s place.

Ganga looks towards Dai Maa for a while, then makes another mark, and replies Thumki she isn’t here to take someone’s place. She is Ganga and can find her own way. Ria and Aashi were impressed, Dai Maa happy while Savitri and Thumki were shocked. Ganga walks inside into her room. Kushaal was happy they will have good confrontations. Savitri sends Dai Maa to show Ganga her room.

In the corridor, Dai Maa tells Ganga she shows Pavitri her room just like Ganga. Ganga says Dai Maa called her a daughter, she need not call her out of respect. Dai maa gets teary. Ganga notices someone stalking her, then goes ahead with Dai maa. The room was vast. Dai Maa says this is her room. Ganag looks towards Parvati’s picture and calls her pretty, Dai Maa agrees she was really beautiful and goes to get something for her to eat.

Ganga looks around towards the intricate decoration and pottery and was about to touch them when Shiv enters. He forbids her and says its good she wants to make her place in the house, but she need not touch Parvati’s belongings. Everything must be as Parvati left, even him. Ganga agrees, and calls Parvati as pretty.

Shiv says he sleeps outside, she can live comfortably in this room. He can’t sleep well in this room since Parvati has left. Ganga sits on the bed, blankly. She watches Radhika’s dress, as she stood outside and comes behind her. Radhika turns her face angrily, Ganga forwards her hand towards her and says a hello, introducing herself as Ganga. Radhika doesn’t reply and leaves. Ganga was worried.

At night, Savitri watches Aashi and says she knows well she couldn’t come over her father’s cremation. Thumki informs about Ganga’s arrival, Savitri says each daughter in law must reach before dinner. Dai Maa takes the blame over herself, and assures she would tell her about all the rules.

Savitri insists she must abide by the rules if to stay in the house. Everyone leaves the table. Thumki says now after everyone had her meal, she will eat. Dai Maa apologizes Ganga for not informing. Ganga asks her about Shiv, as no one waited for her. Dai Maa qualifies Shiv returns a little late, as he is busy. Shiv enters the house then.

Dai Maa says she would serve the food, he agrees. Dai Maa sends her behind Shiv to help him get fresh. Ganga comes towards Shiv. The pot of water drops off his hands towards Ganga, she bends before him and fill it with water in spite of his resistance. She pours water for him, then brings towel. He takes it after a little resistance and nods at her. Ganga wonders where life has taken her, if yes then why everyone feels strange.

Thumki curses her luck that Shiv just reached, and was upset that she is really hungry. Shiv sits to have food. Savitri says had he informed them, they could have waited for him. Shiv says he doesn’t like everyone wait for him. Savitri accompanies him during the dinner, while Ganga and Thumki stood there. Muneem ji comes to take Shiv back as a few employees are leaving job.

Savitri complains Muneem that Shiv only reached home, he may take Pratab. Kushal says only Shiv’s signatures work. Savitri was curt when Muneem and Kushaal insist only Shiv will take his father’s place. Shiv leaves. Savitri also leaves the hall curtly. Thumki hurries for dinner. She forbids Ganga to sit and eat, as her husband hasn’t eaten yet. Ganga hears angrily.

Thumki says when her husband has eaten, she can only eat in his left over plate. Ganga replies she has no problem in looking forward to his return, but she won’t eat in a left over plate. Thumki asks if she seems to be an owl, Ganga must mind it that everyone must abide by the rules of this house. Ganga leaves the hall. Thumki calls from behind, that eating the left over increases love.

Shiv used to feed Parvati with his own hands, but it seems it’s not her fate to eat this way. In the room, Ganga drinks water to calm herself down. She was upset about Shiv’s cold behavior. She lay on the bed, then sits up upset that these people appear to be strangers. She cries that she herself is a stranger, she doesn’t recognize her own self.

Shiv returns home late at night, he finds Savitri’s room light still on and goes to her. He massages her legs, and holds himself responsible for bringing this loneliness to her life. Savitri considers this her fate, but now she realizes what Shiv must have bear after Parvati. She also understands he has to bear Ganga as a burden now.

Shiv says he would never be able to give Ganga the rank and place of a wife. Savitri assures her side to Shiv, just like his father. She goes to get a box full of laddu; like his father did. She will continue his tradition now and places a laddu in Shiv’s hand. Shiv massages her legs for a while, then leaves the room.

Gangaa 14 January 2020 Update ends as Ganga has a dream about drowning, and Sagar’s call for Ganga and Krishna. She wakes up sweating and notices allergy all over her bed. There were pests over her bed, she gets down screaming. Thumki and Ria enter, Ganga points towards the ticks on bed. Ria goes to get an ointment, Thumki cheers this seems to be Radhika’s mischievousness. Radhika smiles from behind. 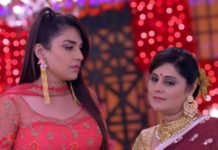