Gangaa 15 January 2020 Update starts when Ganga wakes up at mid night wondering why she is so hungry. She remembers she didn’t have breakfast last night, her hands were also itchy. She goes out to get a little fresh, and watches Shiv cleaning the cow house. He then tied the legs of cow, and speaks to him that his father is no more here to come to her. He gets upset that his father would not return, for any of us now. He sits to milk to cow, and speaks to the cow that even animals understands the language of humans which even humans may not understand. They both feels the absence of his Bauji. Shiv comes inside.

Ganga watches Shiv from upstairs in the kitchen, then thinks may be Shiv is hungry. Shiv notices the lights in kitchen and goes to see who is awake, Ganga was looking into the pots in search of food. He tells Ganga kitchen opens after 8 o clock Pooja, then notices the irritated skin of Ganga. He hands Ganga his glass, but she didn’t look towards him. He pours tea for Ganga from his cup and leaves. Ganga watches him go, and calls him stone hearted complaining he didn’t inquire about what she wanted. She then looks towards the cup, and sips the tea. Shiv watches her drink.

Ganga passes through the corridor where Shiv had been working. Jhumki hears Pratab complaining Savitri that Shiv can’t get the turban of the village, he wonders how can Savitri bear this injustice done with her real son. Savitri advices him to learn and do something by himself. Kushal comes from behind Jhumki and asks what she is doing here. Jhumki explains she was checking the dust at the door.

Outside, Shiv was grinding some herbs using mortar and pestle.Jhumki comes to Shiv and asks if he would eat something. Shiv hands her an ointment to give it to Ganga. After Shiv leaves, Jhumki was determined not to give the ointment to Ganga at any cost. Outside, Shiv remembers about telling Ganga to put the ointment for only 20 minutes. He enters to find the bowl spilt on the corner of floor and picks it up carefully off the floor.

In the room, Ganga had taken a back and was combing when Shiv enters. He knocks at the door. Ganga covers her head at once, and asks if there is something important. Shiv gives him the bowl of ointment and leave. Ganga comes to put it over her body, and smiles over Shiv’s care for her.In the hall, Savitri advices Pratab to get up early. Jhumki brings the tea for both, complaining about all the jobs she has to do. Aashi comes to the hall, and chases Radhika for ruining her makeup. She accuses Radhika of stealing her lipstick.

Radhika taunts if not ruining a lipstick will get her married. Aashi was angry, but Jhumki also taunts Aashi for not being able to marry. Dai Maa brings Ganga for Savitri’s blessing as today will be her first kitchen. Savitri says taking their elder’s blessings is also important, she must place a plate of food on the roof. Dai Maa takes Ganga along with her, and tells her to prepare kheer poori.

Jhumki comes to Radhika and teases, her new mother will now get blessings from the heirs as well. Radhika wasn’t ready to let Ganga reach the roof. Jhumki stops Ganga and asks her to take Shiv’s lunch box, as he forgot it home today. She says everyone outside knows about his whereabouts and can take her there. Ganga says she would take it, after placing the food on roof. Jhumki cheers.

Radhika cuts the log of wooden stairs outside, Jhumki comes to look for Radhika on the roof. Radhika thinks this way Ganga won’t be able to get the blessings of their heirs and hides behind the well as Ganga arrives. She watches Ganga step up the stair and slip over the floor. Ganga was upset there is something wrong with her, and was relived the food didn’t fell off. Radhika was upset as Ganga somehow manages to go up and place the food there. Ganga remembers about taking the lunch box to Shiv, but finds the cutter there on floor.

Radhika was determined not to let Ganga win everytime and be her father’s friend. Ganga comes out and says Jhumki told her to go in the car. The driver comes to ask where she has to go and takes Ganga along. Radhika comes out not in a mood to speak to Jhumki. Jhumki tells Radhika that Ganga has gone to Shiv, and will take some hours for sure to return. She further pumps Radhika that Ganga is forwarding her hands to be Shiv’s friend, she will soon take over Shiv from Radhika and her mother’s memories. Radhika leaves saying she won’t let Ganga be friends with Shiv. Jhumki appreciates herself.

The driver informs Ganga about having reached, and opens the door for Ganga. Ganga walks towards the workplace and watches Shiv caring people around. He helps each of the villager to his best; providing shelter to a family. Ganga spots a boy spilling his glass of milk. She goes to question him but he lies straight away. Ganga says she had his snapshot and would soon take it to Shiv. The boy stops her, and accepts his mistake.

Ganga says this was wrong, the boy says there is always a medicine in the milk and he spills it every day. Ganga takes his promise not to spill the milk again. The boy runs away. Ganga looks around for Shiv when a man comes to her; saying Shiv was in office. Kushaal reaches, and thinks when Jhumki got so concerned for others did. Ganga turns to leave but Shiv comes out. He shouts at Ganga and questions why she touched Parvati’s lunch box, as he had forbidden her to touch any of Parvati’s belongings.

Ganga was silent, Shiv demands her a question. People had gathered around. Ganga leaves silently. Kushaal tells Shiv it was not Ganga’s mistake. Shiv only stares towards him. Dai Maa asks Ganga what happened that she is upset. Tears fell off Ganga’s eyes, and says no matter what she does but she is always scolding. She wonders what that man considers her to be, he shouted at her in front of everyone. She is tired, and can’t bear anymore. Dai Maa takes her inside. Jhumki and Radhika were happy, Jhumki says it seems Shiv really scolded Ganga. Radhika was excited to get her scolded even more.

In the kitchen, Ganga was enraged at Shiv for shouting over her. Dai Maa says Shiv never does this. Ganga says Jhumki told her to take the lunch box, had she known it was his wife’s she would never have touched this. Dai Maa says Jhumki is aware of everything, then why she did so. Ganga questions what her mistake in all this is. Dai Maa tells her to keep her soul clear, Shiv doesn’t know about the truth.

Dai Maa advices her to let it go for the first time. Ganga denies fulfilling every ritual. Dai Maa was ready to cook, and says the day Shiv realizes his mistake he would surely apologize Ganga. Ganga asks Dai Maa to put the spices, but Dai Maa calls her. Ganga cooks angrily, Dai Maa asks where she learnt to cook. Ganga gets blank at once, replying she doesn’t know about it. She is used to cook, but doesn’t remember whom she used to cook, whom she learnt from.

Ganga was serving food platters when Radhika enters in the kitchen from behind her. She looks around for spices and mix it in a plate. She was sure Shiv would scream after having a bite from it. Dai Maa comes and asks Radhika what is it about. She tells Radhika to take a single platter, rest she would manage. Radhika takes her prepared platter. Savitri was happy that today was first cooking of Ganga, and Shiv has also joined them. Everyone was excited.

Gangaa 15 January 2020 Update ends when Shiv notices Ganga’s anger for him. Radhika brings the plate, everyone compliments her for helping her mother. Kushaal informs Savitri that tomorrow is a good date for Pagri event. Aashi comes to the table and denies taking as much pulao. Ganga says she would change. Shiv offers about exchanging the platter, Radhika was still worried. Ganga switches the plates. 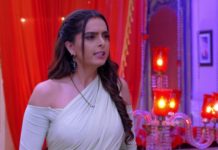