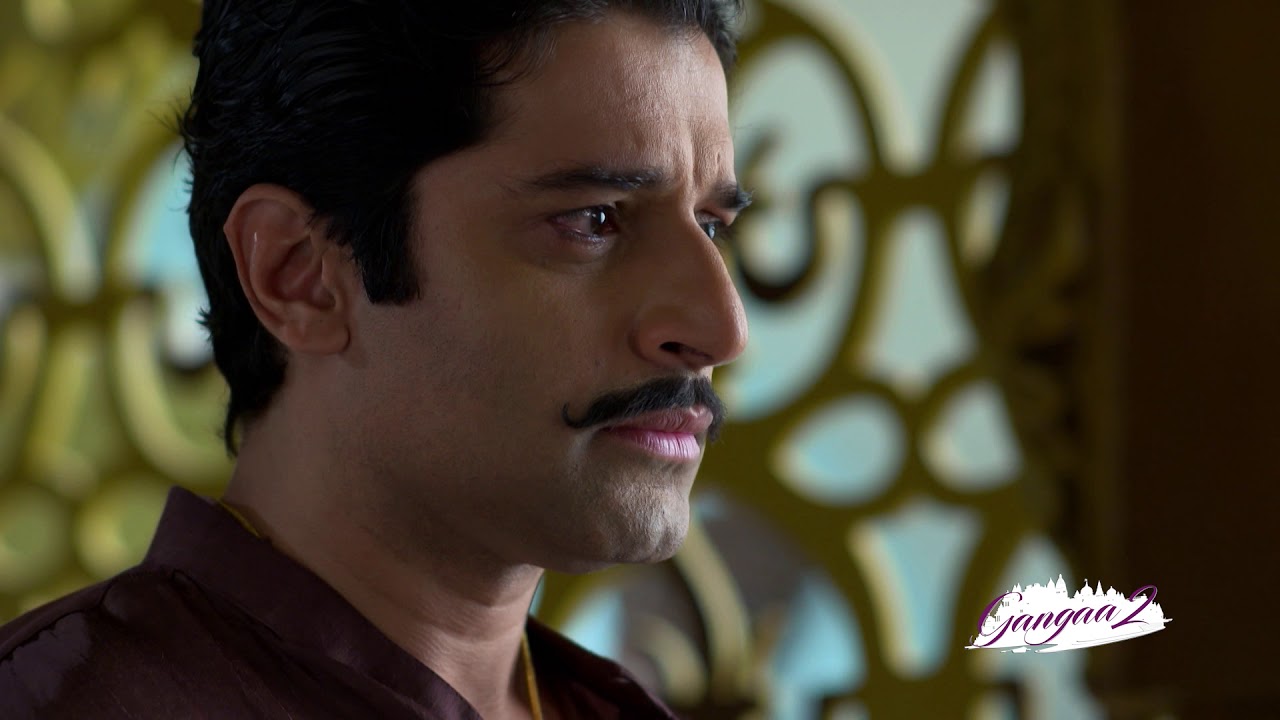 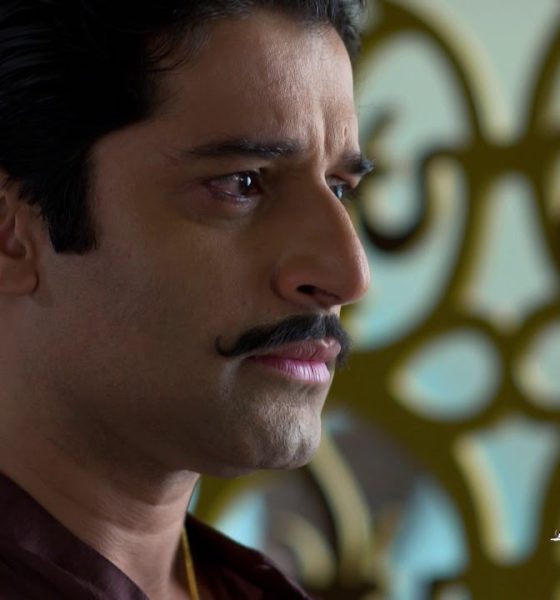 Karoli Baba finds Ganga having fallen Shivlin. Baba tells Ganga not to do this, she already showed her passion. He punishes her to protect the flame in front of Shivlin in Math. Savitri cheers watching this.

At night, Kushal stops Riya and asks where she is going. Riya says there is something important she has to do and rushes outside.In Math, Dai Maa comes to assure Ganga there wasn’t much of her mistake. Ganga was upset that she couldn’t fulfil her promise. Dai Maa was sure that Baba would soon recognize Ganga’s abilities, she was sure Ganga would soon win over Baba’s heart. Jhumki stood behind the wall and unbolts window’s lock.

Dai Maa goes to look for Shiv. The window panes start moving of strong wind, Ganga tries to protect the flame and use a stick to shut the windows. She now sits beside the flame to keep it burning. She soon gets sleepy and keeps her head with the table. Her clothes get the flame and catch fire. Shiv had just entered the room and screams Ganga’s name rushing to throw water over her and the flame. He asks Ganga to come along him and leaves his men to look after the flame. Inside the room, he hands his jacket and shirt to Ganga to change.

Ganga looks around, then goes to a corner to change her dress. After changing, Ganga apologizes for not taking care and having fallen asleep. Shiv says she was tired and it wasn’t her mistake. He inquires if she ate something, then looks behind to see Ganga in his clothes and laugh. Ganga also smiles. She tells Shiv there was no food left today. Shiv says she enjoys being hungry. Ganga thinks she is really hungry but if she should tell him. Shiv says he has realized she can never bear hunger, he has seen that avatar of her many times. He gives Sattu’s laddu to Ganga, which he prepares by himself.

Ganga watches him kneed to prepare laddu for her. She compliments them to be yummy. Shiv eats one himself, and says Dai Maa told him about what happened in the temple. He confirms if she broke the Shivlin, Ganga asks if he would accept she didn’t break it. Shiv says he know Ganga a bit, the man was concerned for her.Savitri makes a call to Pratab and tells him to bring Parvati’s jewellry to her till morning. She says she will show Shiv how well he understands Ganga now.

The next morning, Shiv discuss with Pratab about preparations. Savitri brings Parvati’s jewellry to Ganga as she has a right over them now. Shiv allows this too, while Ganga was reluctant. Savitri says these are going down their family for generations, she must take care of these. Ganga w as worried.

In Math, Ganga comes down the jeep wearing all the jewellry. Savitri tells Jhumki they wish to steal the jewellry. Shiv stares at Ganga who smiles at him, as she stops by him and covers her face. A poor lady comes to ask Jhumki for help for her daughter’s wedding. Jhumki was disgusted. There, Baba was distributing the jewellry. He spots Parvati’s jewellry, Baba wish she takes care of the jewellry like Parvati did. Savitri whispers to Jhumki and asks if she needs this jewelry? Jhumki was ready to abide by any of Savitri’s orders, Savitri gives her some idea.

The poor lady enters again, Jhumki thinks this beggar lady is suitable for her chore. She follows the lady and promises to give her ten thousand, against stealing some jewellry for her. The lady says she would never have done this sin, if she didn’t need money. Jhumki says she would tell her how she must steal. She tells the lady she would mix Bhang in ladu, Ganga would faint eating them and she can easily steal the jewellry then.

In the room, Jhumki brings a laddu as Prasad by Baba. Ganga was about to eat from it, Kushaal comes in and says the one in Ganga’s hand is for Jhumki. Baba sent him to correct his mistake. He tosses both bowls to confuse Jhumki and makes her eat from her bowl. Jhumki was confused, Kushaal pushes her to eat the Prasad right here. He thinks now Jhumki would turn into a drama.

A lady comes to Santoshi and says Dhairi met her travelling to Jaipur. Santoshi thinks about going there too.Ganga was conscious at Math for not making a mistake, she goes to make arrangements. She watches a cook and wonders how a single person would finish all the cooking in time.There, Kaka calls Santoshi worried about her. Santoshi assures she is fine. He asks about Dhairi, Santoshi replies not yet.

Pushpa brings tea for Kaka and says there is a big Pooja and she also wants to go to that Baba. Kaka calls it another trap of Sheshnath.Santoshi arrives at Math looking for Dhairi, and was determined to find her husband. Ganga was instructing the cook and asks why he didn’t call someone for help. Santoshi stood behind Ganga and asks the people around about Dhairi. Ganga turns towards her but Jhumki had just come between, she tries to act crazy with Santoshi; Santoshi tries to get away from her.

Jhumki looks at the picture and says she has seen Dhairi, but would never tell Santoshi. Santoshi spots a man in a shawl and goes behind him, the man turns out to be someone else. Tears fill Santoshi’s eyes.Pushpa reaches the Pooja spot where a white faced man sits indisguise. She was impressed as she calls her by her name, she calls him great and requests him to come along her. Her owner is really worried, and may pay him great.

Santoshi meets Shiv, Shiv offers her Prasad. She was reluctant to take, Shiv says it seems she is really troubled. He assures God would show her the right path to her destiny soon. Santoshi says his talk has given her courage. Shiv says to fight a problem, she must be healthy and eat in time. She asks about the lady in the room nearby, Shiv says that is a maid of their village. He suggests her to meet Karoli Baba, he might show her the right way.

Kaka was angry at Baba who arrived with Pushpa. Baba thinks these ladies seem to be rich. The ladies listen to him for a while, then beat him with his own recorder.Santoshi comes to Karoli Baba and asks him to pray for her husband. Ganga hears this. Baba says she must do something that people pray for her, that way she will get to her husband. Outside, Ganga prays Shiv doesn’t have to get close to any pains now. She thinks and prays for Santoshi as well, and wish to speak to the lady.

The poor lady stood behind the wall with a rod, she thinks Ganga is fine and how must she steal the jewellry now. Savitri comes to her and says she must now steal the jewellry alone and would get double the amount. Outside, the lady attacks Santoshi and tries to flee so as not to get caught. Jhumki who was drunk, gets hold of the lady and says she has to steal Ganga’s jewellry. Santoshi wonders if she saw Ganga there and thinks Ganga is in much danger. She must inform her about their planning against her. Gangaa 25 January 2020 Update on Zee World

Shiv watches Santoshi as Savitri had taken Jhumki. He watches her hand injured and insists on her to come in, he would put an ointment. Santoshi was in a hurry but Shiv takes her inside. He stops Ganga and tells her to take this lady inside, then introduces her as his wife. Ganga holds her hand, Santoshi goes with her.

Ganga makes Santoshi comfortable inside and brings herbal ointment for her. Santoshi recalls the lady. Ganga asks about her whereabouts. Ganga tells her about Shiv as her husband, and Mathadesh. Santoshi wonders if she would know about Ganga, then asks her a help to find a friend of her. She is daughter in law of Chattervedi family in Banaras. She just saw her in her Math. Ganga asks about her name, Santoshi was about to tell her but Riya comes to take Ganga for Pooja.

Santoshi sits upset about Dhairi. She thinks about Baba’s advice, and thinks about bringing smile to someone. She thinks she must thank Ganga, and maybe she came here to get Ganga meet her family.

At home, Sheshnath’s face ached while his wife put an ointment over his face.There, Jhumki behaved childishly as Savitri puts sindoor to them. Ganga removes her veil for Savitri and calls Santoshi as well. Santoshi was shocked to see Ganga and hurries towards Savitri. Everyone move towards Math. Santoshi drags Ganga aside and asks what she is doing here.

Ganga asks what she is doing here, she belongs here. Santoshi asks if her family came to stay here. Ganga replies they live here for years. Santoshi says she called Banaras, there she came to know she came across a storm and died. She asks her about her husband. Ganga says Shiv is her husband, whom she met a while ago.

Gangaa 25 January 2020 Update ends when Kaka was trying Santoshi’s number. He hears Krishna and her mother talking to each other that Santoshi is in Jaipur, and if she comes across an accident there they won’t be held responsible. Santoshi gets her Kaka’s call, he says Dhairi isn’t there, she sent her there to remove her off their way. He asks her to return soon and through train. Santoshi was worried about Ganga, and thinks she can’t help her anyway.