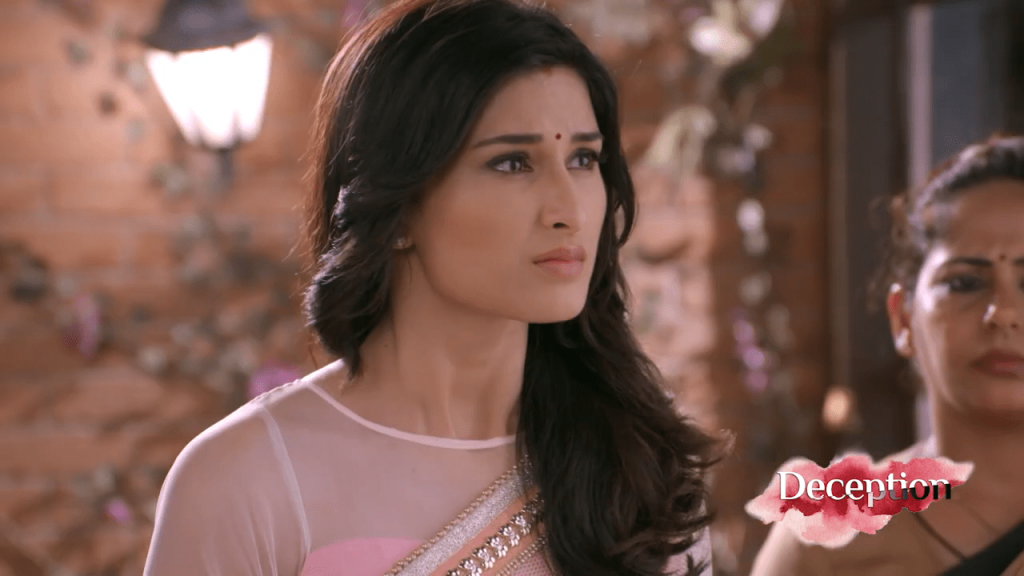 The Episode starts with Neelima telling something about Pooja. Surbhi tells that Neelima wants to say that Pooja has closed all doors by standing in this election. Dada ji welcomes Pooja. Pooja apologizes to Dada ji. Naren asks Dada ji to forgive her for her sins. Harsha is forced to do her aarti. Naren tells her, you have come to enemy’s house. Rahul teases Pooja. Surbhi acts sweet infront of Dada ji and asks Naren and Pooja to enter home.

Naren talks about votes. Pooja says he is a businessman. Harish tells Naren that bahu drama will go on for 2 days. Naren says she is my Political rival whose mayka is my brother and Mum’s guilty. Supriya talks to Angraj’s big photo frame and says she will be locked in the room until Pooja stays in her house. She blames Pooja for killing Angraj and ruining Naren’s life.

Danish comes and asks Dada ji to have medicine. Dada ji refuses to take the medicine. Pooja says if you don’t have the medicine then I will leave. Dada ji goes to have medicine. Neelima and Harsha taunt Pooja and leave. Surbhi acts sweets with Pooja again and says everyone will come out of trauma with time, and tells that next two days will change your life. Surbhi hugs her. Surbhi asks Rahul to go and bring the guest. Neelima says he will stay with us and nobody will know about it. Pooja misses Supriya and thinks she can’t bear to stay far from her.

Dada ji asks Pooja why did you stay in your mayka for many days. Naren comes there. Dada ji asks him to apologize to Pooja. Naren asks what did I do? Naren tries to go and falls on her. Dada ji asks them to get ready. Rahul talks to Angraj and tells him that the ladies in simple clothes must be for Pooja’s security, but they don’t know that they have back door also.

Naren and Pooja continue to argue with each other. He asks her to get ready for an interview. Pooja says she got it canceled as she wants to concentrate on puja and tells that devil can give an interview during puja, but me. Naren says I got the interview time changed. Pooja sees the room messed up. Naren says you have to stay here. Pooja says you are forgetting that you have to stay here also. Naren says this room has two divisions and says I will escort you to your side.

Rahul helps Angraj enter home wearing mask. Supriya senses his presence and asks Rahul if someone came. Rahul says no. Angraj hides. Supriya comes. Angraj and Rahul look on. Naren sings a song to tease her. Pooja blames him for making their fight as a family war. Naren blames her for Supriya’s condition. Pooja says you have nothing to do with Kusum and Rachel’s pain and can see just your pain. Naren says you can’t be guilt free and says I have seen Angraj’s Id cards and stuff and doubts on her intentions to come there. Pooja says it seems we have nothing to talk about now.

Naren crying sitting at Supriya’s bedside. Surbhi asks Rahul why the bandage is on the person’s face. Rahul says let it be for some days. It seems angraj’s got his plastic surgery done. Pooja cleans the room. Naren comes back and takes papers from her hand and flushes in the commode. He tells her that he can’t tell her good night as her entire night will be spend to write speech again. Shailaja asks Pooja why did she return the car which she sent. Pooja says it is not needed. Shailaja says I hope your stay will not be talked here. Reporter starts questioning Pooja about her stay in Vyas Mansion. Pooja says she wants to fight for common woman and says that she is doing Vrat Savitri puja.

Reporter asks if this is true that Harish hired you for Naren’s treatment. Pooja says Harish hired her to befriend Naren and then they got married since 3 years. Reporter asks if she stole his strategy for the elections and says I think you have a motive to stay there. Naren gets angry and raises his hand on the reporter asking how dare he? Danish and Pooja asks the cameraman to shut the cameras. Shailaja says this is a good chance to make the enemy humiliated. Pooja says this is wrong and tells that Naren is her husband now. She stops Naren from beating the reporter. Naren looks on. Angraj, Rahul and Surbhi see the CCTV footage live.

Angraj admires Pooja and says she loves him so much and I yearn for her slap. Rahul says you will soon get her. Angraj thanks Rahul for helping him executing the plan. A fb is shown, Rahul comes down the building. Angraj gets up and tells that bullet proof jacket is painful. He takes out the bullet. Rahul says we shall go from here before Naren comes. They leave. FB ends.

Surbhi tells that she can’t wait when his bandage will be removed. Angraj says everyone will be shocked to see my face. Deception 21 May 2020 Update

Naren and Pooja come back home. Surbhi acts and asks where they did go? Pooja says they went somewhere. Dada ji asks if she brought something. Pooja thinks she forgot to get it. Rahul sees Shailaja’s security outside Vyas mansion and says nobody can save Pooja. Pooja applies ointment to Naren. Naren gets up. Rahul makes the security guys unconscious and says happy vrat savitri. He changes the ingredients to be given to Supriya by Pooja.

Pooja coming to the room. Naren asks where to send the bill. Pooja says party office. He argues and asks her to just pretend her drama in front of Dada ji. They come downstairs. Dada ji asks Pooja to go and call Supriya from her room. Pooja thinks she has to clear Supriya’s misunderstanding and knocks on the door. She thinks this is the only way out. Angraj calls Supriya standing in her room and asks her not to come near him. Pooja asks Servant to give her Maa’s room keys. Naren asks she is going to whose room hiding. Pooja tells that she has still rights on the house and asks for corridor room keys. Naren gives her. Pooja says you didn’t argue? If old memories weakened you.

Supriya tells Angraj that Naren fought with Pooja and her in-laws and tells that he is searching his body. Angraj tells her that Pooja came to kill you in this house. Supriya says Pooja can’t do this. Angraj says you might not have thought that she and her family will kill me. He tells that Pooja will attempt to kill her during Puja. Pooja opens the room using keys and gets inside. Angraj hides. Supriya scolds her for entering her room and asks her to leave.

Pooja says I can’t change whatever happened that day, but don’t know how to clear the misunderstanding. Supriya says I never differentiated between you and Naren and then also you did this. Pooja says, believe me, I didn’t know where is Angraj’s body. Supriya asks why did you come to my room. Pooja says so that I can get you ready for puja. Supriya asks her to vacate her room in five mins.

Dada ji asks Pooja to call Supriya. Surbhi says she is tired after doing work and that’s why resting. Surbhi acts sweet with Pooja. Pooja says she is thinking what to tell dada ji as she has to leave after puja. Surbhi says doors will be closed for you forever. Neelima asks Rahul why did he bring Angraj here as they have many farmhouse etc. Rahul says if Angraj is here, then only Supriya will think him as a soul and will pressurize Naren.

Pooja asks Harish to convince Supriya to come out of room. Harish says I lost my son and bahu and tells that he doesn’t want Surbhi to come, and asks her to find her own solution. Naren taunts Pooja and says he doesn’t know which is the real or fake face of her. Pooja says it is our relationship’s mistake as it could hold on its roots even after many years, and excuses herself.

Harsha asks Dada ji if he took medicine. Dada ji says I can understand that damad ji is not here. Neelima says why this ritual is forced on us. Dada ji says he is not forcing anyone to do puja, everyone is free to do anything. Naren says vrat savitri and bahu game will be over in some time, then you will come here to congratulate me. Pooja says if you are troubled because of me. Naren asks her to think about Dada ji. He says he is getting irritated.

Deception 21 May 2020 Update ends as Rahul says Maha yudh happened between them. Surbhi says everything shall happen as planned. Harsha says let’s begin the puja. Dada ji asks Pooja where is Supriya and says he will go to call her. Harish says if Dada ji see Angraj’s pic. Rahul says then something will happen to him and Pooja will be blamed. Dada ji says he will go and call her. Just then Supriya comes there and smiles.