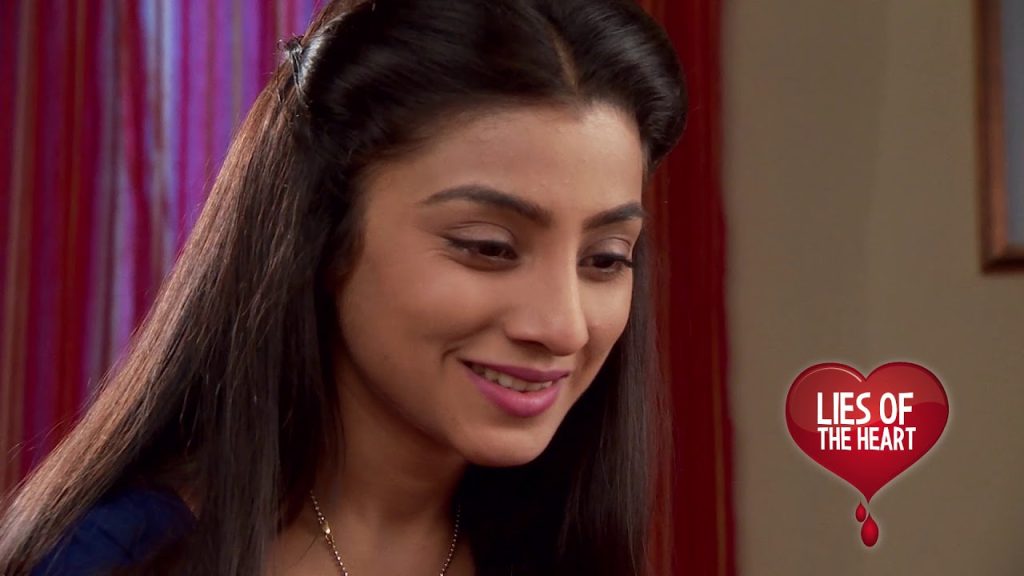 Urmi cancels amrit’s phone, while he asks her to meet her once. samrat comes and asks who it was, and she lies that it was just a wrong number. samrat is trensed, as urmi leaves to get her milk.

The next morning, shashi laments that aditi’s life is spoiled, and starts venting venom against amrit. rudra too is tensed. urmi hears them from the kitchen, and comes to them, and tries to distract shashi with the work thats left. aditi comes in and says that she too would help in the kitchen. She asks why should she rest, and asks if they are tensed as to why isnt she tensed, and why isnt she crying over’s amrit’s departure.

Urmi says that its noghing like that and just wanted her to relax. amrit says that he doesnt mean anything to her and they should understand it too. urmi says that she is completely right and that this house and its members are always there for her, and that family would never betray her, and asks her not to think that being marrried, she would become a burden on them now. She assures aditi that this house is equally hers, and that they are always with her.

Aditi says that they would still be tensed for her, and asks them not to worry. Rudra blesses her, and says that being parents, they would worry, but its good that they got a wife like urmi, who in all situations handles everyone. Aditi complies. Shashi too gets overwhelmed at urmi.

Samrat eyes kanjilal, with some foreigner girls, and thinks that new itmes have come, and decides to take a lok. He puts the car to a halt, and then comes to him, and asks for when did this come. samrat tells that he is always ready for new and beautiful. the dealer asks which one he wants, and as samrat leeringly eyes them both, he says that he would have both the girls tonight. meanwhile, saroj, passing in an auto, sees samrat with both the girls, and his arms around them and is shocked, as she sees him cajoling them both. samrat leaves and gets into the car. Saroj is shocked to see this and leaves herself too. Lies of the Heart 20 May 2020 Update

All are working in the kitchen, when shaurya takes saroj’s phone, and saroj urgently tells him to make her talk to urmi. Urmi asks shaurya to say that she would call later. but saroj insists and urmi asks shashi to explain. sheashi complies. Saroj asks shashi to send urmi for some time and he readily agrees. she asks urmi to come in the evening.

When urmi comes home, she finds saroj highly tensed. saroj asks about samrat from urmi, and she happily says that everything is fine now and keeps hert very nicely. She asks saroj why is she asking this. saroj asks if she is sure and she isnt hiding anything. Urmi asks whats the matter. saroj eyes urmi and tensedly tells her, that a husband can have various evils, which a wife always compromises, but a character cant be compromised on any condition and that there are some misdoings, that just cant be borne silently by the wife, as it turns everyone’s life to hell. urmi is confused and asks who is she talking about. when saroj says that its samrat.

Urmi anrgily lashes out at her, saying that she can bear anything but not infidelity from samrat, and she of all people knows this best. Saroj says that when she was coming back from the market, she saw samrat with some foreigners. urmi is shocked to hear this, but then smiles, and asks whats the matter. saroj says that it didnt look very nice. Urmi says that they must have been clients, and asks her not to bother for all this. saroj says that she got very scared. urmi says thayt its nothing like that and if she is okay now. she begins to leave, when devi comes in, and urmi heartily shares the misunderstanding that saroj had and then leaves. Devi and saroj are tensed to see each other.

Outside, while urmi hollers for an auto, she finds herself face to face with amrit. she tries to leave, but he asks her to listen to him just once, as she refused to meet him. She asks him to stay away as she doesnt want to hear anything. he says that he wants to talk of her benefit, and samrat’s reality. but she discards it all off. amrit tells her that he may be low level, but samrat is equally bad and characterless too. urmi asks him to shut up. He defiantly tells her about samrat’s infidelity and promiscuities and then asks her to check herself, by seeing in the hotel Blue Peridot.

Amrit tells urmi that samrat has taken lots of girls there. As he begins to tell the number of the room even, urmi slaps him tight, and asks how dare he put this taint on her husband, and that she has blind faith on her husband and asks him not to come any closer as she would send him to jail. She leaves anrgily. the screen freezes on amrit’s angry face.

As urmi comes back, samrat asks about her trip, and she says that it was fine. urmi begins to change, while samrat asks her if she told about his changed behaviour these days. She complies. urmi tells samrat about having met amrit, and how, where and why she had to converse with him, and what kind of rubbish he was talking. she starts venting out her frustration at amrit and his callous behaviour, while samrat remembers amrit’s warning. she tells him when samrat insists what exactly amrit told her. He is shocked to hear that urmi knows about his promiscuous habit, after urmi makes him promise that he wont be bothered.

He gets angry but she asks him not to be tensed as this is exactly what amrit wants, and when they dont react, he wont bother them anymore. she says that she knows him, and that these things wotn make any change for her behaviourtowards him. she goes to get food for him, asking him not to be stressed. Samrat is furious at amrit’s audacity. He thinks that he would have to cancel the programme for today, or else it would be an unnecessary risk. He calls kanchilal, and cancels the plan for tonight. He is super furious at amrit. He decides to take his revenge on him.

Later, Urmi gives some clothes to the maid for washing. Urmi gets into handling shaurya, while commenting that she would send him into the boarding school. Just then, the maid comes in showing a Hotel blue peridot card, saying that she got it in samrat’s pocket. But before urmi can see it, shaurya distracts them by throwing water on himself. urmi attends to him, while she asks the maid to keep the card in samrat’s drawer as it must have been for his use. The maid leaves after complying. urmio attends to shaurya as she finds him coughing and falling sick.

Devi reprimands saroj for making urmi to doubt her own husband. saroj defiantly says that it was definitely a matter of concern, as she saw samrat with girls, in a compromising condition. devi doesnt take it seriously, and saroj says that she was just warning urmi, so that she doesnt have to bear what she had to do in her life, hinting at his infidelity. Devi gets angry, while saroj says that since her life had been turned to hell, she wouldnt bear the same to happen to urmi ever. devi asks her not to taunt for something thats long forgotten. saroj says that some wounds are never healed in life. She says that she was the one who suffered. But devi asks her to let bygones be bygones, and asks what does she want now. she leaves without saying anything. devi is tensed.

Later, granny akss anu what she talked that dayw tih kartan, as he never came again. anu says that she doesnt want to get amrried and when she does, it would be by her choice. Granny is angry at her, while asha starts having a dizzy spell, as anu and granny enter into a verbal spat. Granny is shocked when she says that she would have a love marriage, as anu gives a clarification for it. finally asha asks them to sit and speak, and why are they moving around. Asha says that she actually is moving. Anu points to her, as a perfect example of a failed arranged marriage. Asha comes to granny, and falls dizzy on the floor. All are concerned as they tend to her.

Lies of the Heart 20 May 2020 Update – When the doctor comes and tells that asha is pregnant, all are happy and overjoyed, and congratulate gaurav. asha gets up and says that it cant happen. granny asks why cant this be. asha says that she hasnt vomitted yet and raises doubt on the doctor. All are embarassed. Anu asdks her to shut up, while gaurav too apologises. granny says that vomitting isnt necessary and asha asks her to be sure if she wants her to vomit or not. the dcotor clarifies that for sure asha is pregnant. All including asha are supremely happy. the doctor leaves, while all bless asha too for the same, and congratulate gaurav. asha asks if granny wont throw her out of the house now. All arew amused at asha’s innocence.

Samrat runs after amrit with an iron rod, while he runs for life, to escape samratr’s ire. He gets hold of him finally, and then starts beating him. But amrit says that he too shall suffer, as he knows very well to control dogs. Amrit too raises his hand on him, and they enter into a scuffle. Samrat beats the pulp out of him, and continues to knock the wind out of his body, while amrit prays that he would die today, while begging to be left with mercy. samrat drops the fatal boulder, and says that he spared him today, but if he tries to be smart again, he would eradicate him completely.

Samrat is unable to concentrate on his work, when the peon comes and samrat orders for coffee, and asks his dirty linen to be washed. Samrat gets kanchi’s call asking if he wants to fix a program tonight, and samrat resignedly says that he cant risk it right now, while kanchi teases him that he shall regret this later. samrat asks him to call later again. But after having cancelled the call, forced by his habit, he isnt able to keep the thought of the two foreign girls with him, out of his mind, and that forces him to call kanchi back and fix a programn for tonight. kanchi happily agrees.

Lies of the Heart 20 May 2020 Update ends as Amrit calls Aditi on home number and tells her about Samrat beating him so bad. He tries to get sympathy, but in vain as she threatens him to tell Samrat if he again calls her. Urmi hears it and wonders why Samrat beat him up. She gets cough syrup from Kanchan for Shaurya. Urmi’s mum calls her and gives the good news of Asha’s pregnancy and tells her to tell everyone in house. 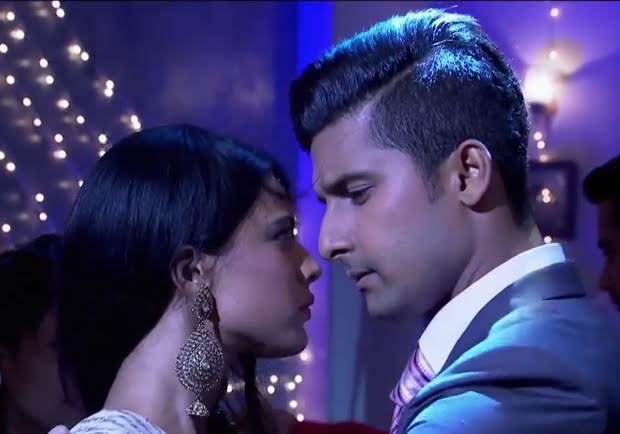