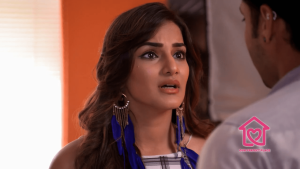 The episode starts as Rahul starts feeling severe stomach pain. Prachi notices him and asks if he is fine. He says yes and says Hetal seems to be busy, so he will brief her tomorrow and now he will go to meet investor. Hetal yells at Tanu that if she does not forget her boyfriend, then she should forget her and leaves. Tanu cries leaving on studio glass wall and Rahul also cries on the opposite side looking at Tanu’s photo.

Rahul gets severe stomach pain. Prachi notices him and asks if he is fine. He says yes and says Hetal is busy, so he will brief her strategy tomorrow, now he is going to meet investor. He leaves in his jeep. Tanu also gets into auto. Sam stops her and asks if she is fine. Tanu says she is fine and set things right with Hetal now, he does not have to worry. She leaves in auto. Sam stands confused.

Rahul reaches beach where he used to meet Tanu. Tanu also reaches same place. They both look at their pics and reminisce their old days. Rahul reminisces Tanu telling that her sister thinks he is snatching her away, so she started yelling at hm. Rahul says not to worry, he will convince her sister. Tanu reminisces same past.

Both Rahul and Tanu’s photos fly in air. Tanu walks towards Rahul and picks his photo instead. Rahul sits getting attack again. She asks him if he is fine. His face is turned and he does not reply. People gather and ask him if he is fine. He coughs up blood. People ask if someone has water. Tanu gives water. People pick Rahul and get him in taxi and he leaves for hospital. Tanu thinks why she is feeling so concerned for this man.

Rahul reaches hospital and docs checks his reports. Tanu reaches home and sees name and number behind her photo and realizes it was Rahul and their photos got exchanged. Doc tells Rahul that his liver has failed and he is dying.

Tanu returns home and sees a name and number behind her and Rahul’s photo. She realizes that it is Rahul’s photo and got exchanged at beach. She gets happy that Rahul still loves her. She then gets angry that he left her alone, so she will not forgive him. She then thinks if he did not love her, then why did he come to their favorite sport after 8 years. She calls number on photo and says she wants to talk to Rahul Mehta. Man says if she wants to talk to Rahul, she should call his number. She says it is very urgent. He asks who is she. She disconnects call and starts crying.

Rahul shatters hearing that his liver has failed and he will die soon. He comes out of hospital and realizes his photo is missing. He rushes to beach and starts searching it. He does not find it and sits crying on beach. He then sees photo under tyre and relaxes. He picks it and leaves.

Parimal calls Ila to talk about Rita’s nightie ad. She scolds him that he does not have right to talk and should worry about cleaning his sins. He tries to speak, but she says dinner will be ready in sometime and she will send it via Uday soon. Our Perfect Place 17 May 2020 Update

Rahul reaches home. Gayatri opens door and asks why he is looking so dull. He says work stress and walks in. Ila says he does not eat well, he has to obey her now. He standing behind her sheds tears and says he will obey her from hereon and will eat whatever she serves. She touches his cheek and feels his tear, asks what happened. He hugs her and cries vigorously reminiscing doc’s words that he is dying. He then goes to his room. Tanu takes his number and calls him. He says hello..who is it. She just cries.

Sam sees Hetal sad in cafeteria weeping and tries to cheer her up. He says hey will go on a long bike ride tomorrow. Tanu calls Rahul’s client. He asks why is she calling again. She says she is a counselor and Rahul had come to her and left his diary, she found his number from Rahul’s diary and called him, she needs to return Rahul’s diary as it may be important to him. Client SMSes her Rahul’s number. She calls Rahul. Rahul says hello. She starts weeping and disconnects call.

Sam picks clothes for his bike trip with Hetal and asks Uday’s opinion. Uday taunts he is just going for a road trip. Sam says he is talking like Prachi. Uday says he chats with Prachi 4-5 times a day. Sam reminds that Prachi has a boyfriend. Uday reminds of his own dialogue that he will face anyone for her. He reveals tomorrow is Prachi’s birthday and he does not know what to gift her. Sam taunts him.

Rita tells Ila that she will cancel her nightie ad. Ila asks not to cancel it and give her time till tomorrow, she will give a proper judgment.

Tanu calls Rahul again. Rahul busy sipping alcohol, holding Tanu’s photo, says whoever she is, he is already booked and is sitting with his sweet heart now. Tanu shatters hearing this and starts clearing why Rahul did this to her.

Our Perfect Place 17 May 2020 Update: Heavily inebriated Rahul go to Ila’s room and wakes her up. He says he cannot tolerate the pain, he is remembering Tanu a lot today, how to forgo this pain. He did not want to come in front of her inebriated, but could not bear pain and came. He goes back to his room and sleeps. In the morning, Ila wakes her up and says she wants to take him to Shree counselor. If Shree can help Rita, she is sure Shree will help even him.