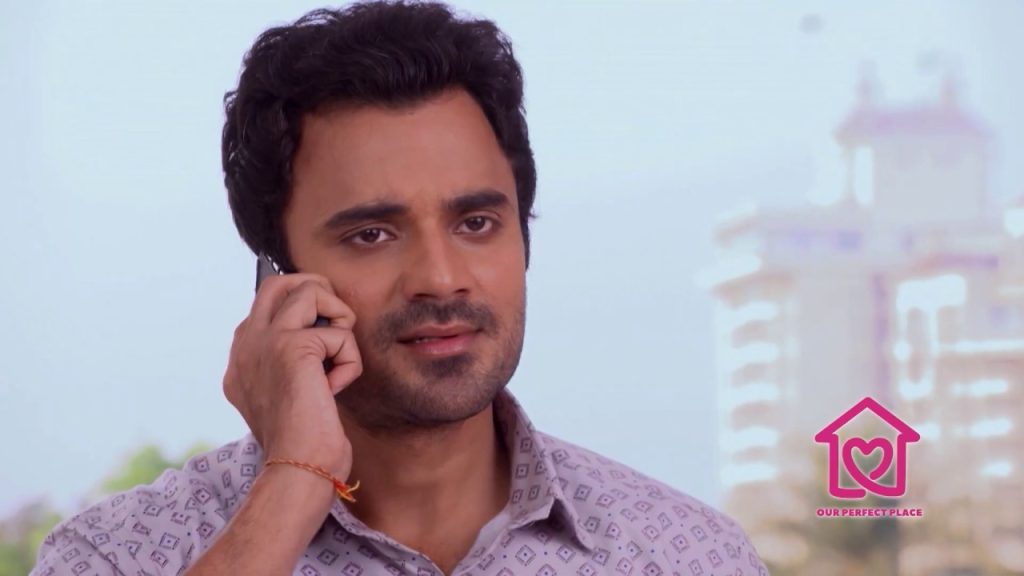 The episode starts as Ila informs Rahul that Shree counselor had come and not Tanu. Rahul shatters hearing that. On the other side, Hetal continues yelling at Tanu to tell her boyfriend’s name and address because of whom their father died. She continues yelling. Tanu scolds her and leaves. She reaches home and continues crying. Ila seeing Rahul shattering cries to control himself.

Rahul travels in his jeep. A taxi driver stops him and requests him to drop his passenger as his car broke out. Rahul agrees. Driver calls Tanu. Tanu comes in front of Rahul as married woman with red sari, sindhoor, bindi, etc.. Rahul is shocked and calls Tanu. Tanu acts and asks if they know each other. Rahul is shocked and says they are college friends. Tanu says she has weak memory, what is his name. He says Rahul. She asks if he is Rahul Mehta. He says yes. Someone calls her. She acts that her husband called her and says I love you, she will return soon, to be patient, to take care of children, etc. Rahul is shocked.

Our Perfect Place 21 May 2020 Update continues as Tanu continues acting and speaking to her fake husband. She tells her fake husband that she met her old college friend and is going to relive old memories. She tells Rahul that she has weak memory and forgot everything, she wants to chat with him and relive old college memories and says let us go somewhere. She gives money to driver. Driver returns money and says he will take when he drops her back in the evening. She says Rahul let us go. Rahul gets her in front seat and looks at her teary eyed wearing goggles. Tanu also wearing goggles shed tears. Phir le aya…song..plays in the background.

Rahul takes Tanu to their favorite spot. Tanu reminisces their romantic meetings there and gets tear eyed, but lies why did he bring her here, they would have gone to some restaurant as she does not have much time, she needs to return home via evening flight. He asks if she does not remember this place. She says she vaguely remembers, but why did he bring her here, she needs to go and buy gifts for her family, especially her husband. Rahu says if she does not have, then they should sit on these benches.

Rahul reminds Tanu that he had met her last before her wedding. He reminisces meeting Tanu and hugging her. She asks if he will take her. He says he cannot. She says she followed him since 4 months hoping he will reaccept her, but he did not. If he says come with me, she will leave everything and come with him. He says he is helpless. She fumes and warns him to never come in front of her in life and get out.

Out of flashback, Rahul asks Tanu if she really does not remember anything. Tanu says no, she is totally occupied by her husband and children and asks him to move on in life like her. He asks how does she know what he is not yet married. She says since they met, they are talking about only her and he family, but not about him, so it obvious he is not yet married. He says let us take selfies to show my husband and herself takes selfies. She says she will leave from he left, she means from here there is a shortcut for market.

He asks if she can give her contact number. He says her husband is very possessive, anyways she did not even remember him well before they met today, so life moves on and even he should. She extends hands and says good bye. He shakes hand. She walks weeping silently. Teri aankhon me..song..plays in the background. Rahul walks towards his jeep looking at Tanu, teary eyed. Teri ankhon ki darya me..song..continues.

Uday gets worried for Sameer when he does not reach home, messages him to reply back or come home soon, he is worried for him. Ila knocks door and asks if Sameer woke up. Uday says he is still asleep. Ila forcefully enters and asks why he is asleep. Uday says he came home later after party at Hetal’s house and is sound asleep. Ila forcefully lifts blanket and sees pillows instead. Uday gets tensed and tries to change topic. Ila insists. Uday says after party, Sam left sadly and did not return home at all. He gets call from Sam’s mobile. Ila asks to switch on speaker. A man speaks and says Sam met with an accident and is in hospital. Ila sits in a shock.

Family brings Sam home. Ila scolds him. Parimal says it is just a small accident and Sam is fine. Ila says even then she is worried. Sam says he hit a stone while parking and fell. Ila asks why did not he wear helmet. He says he forgot in tension. Ila asks what is it. Uday says it is personal. Parimal scolds what is personal at his age, he should stop behaving like Sam.

After sometime, Prachi with her friend comes to meet Sam. Uday introduces her to Ila and Gayatri. Prachi calls Ila as aunty. Uday says she can call her daadi as his daadi is her daadi. Gayatri and Ila look at him. Uday asks Gayatri if she does not want to go and pick Falak and Bejal and if Ila does not have work in kitchen. Gayatri says she will leave then, says she felt good meeting Prachi. Prachi says even she felt good meeting her, aunty.

Gayatri says she can call her mummy, looking at Uday. Once she and Ila leave, Sam speaks to Prachi and asks her not tell Hetal about his accident. Another friend says some client want to meet him in the afternoon. They both leave. Hetal in her room reminisces Sam lying that does not know Tanu, their fight and breakup.

Rahul stands in a shock reminiscing how Tanu did not identify him. He shatters and sits down getting stomach ache. He then reminisces doc’s words that his liver has failed and will die soon. He prays for Tanu’s happiness and leaves. Tanu comes out of hiding and cries seeing Rahul’s condition. Rahul reaches cafeteria and asks servant if someone came to meet him. Servant shows log book and says Pammi aunty came. Rahul reminisces Tanu writing her name as Pammi aunty to enter his hostel. He asks Pammi aunty’s description and servant describes.

Our Perfect Place 21 May 2020 Update ends as Prachi says he is describing Hetal’s sister’s description. Rahul asks if Shree had come. Prachi says Shree is her name after she took counseling profession, her real name is Tanu, both Tanu and Shree are same. Rahul stands shocked.