Trump taken to underground bunker in white house over protests 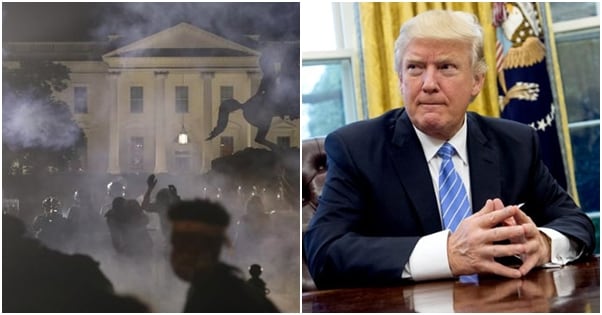 President Donald Trump was briefly taken to an underground bunker in the White House after rioters gathered outside the premises housing the US president and his family.

A source in the White House disclosed that the president was in the underground bunker for a little under an hour before being brought upstairs, CNN reported.

A law enforcement source and another source familiar with the matter also told CNN that the first lady, Melania Trump and their son, Barron, were also taken to the bunker.

The incident was said to have occurred on Friday night, May 29, when protests erupted outside the white house over the police killing of George Floyd by a police officer in the US city of Minneapolis.

Fox News reported that more than 50 secret service officers were injured on Sunday night, May 31, by rioters throwing bottles and Molotov cocktails.

An official told the news channel that groups are planting cars filled with incendiary materials for future use.

It was earlier reported that Derek Chauvin, a US police officer, who was seen in a video kneeling on the neck of a black man, George Floyd, has been charged with murder.

This followed widespread protests over his death. George Floyd was arrested for allegedly using a fake $20 note in a shop.

Chauvin has now been charged with third-degree murder and manslaughter, prosecutors said.

He was taken into custody on Friday, May 29, by the Minnesota Bureau of Criminal Apprehension.

This was disclosed in a news conference by the commissioner of the Minnesota Department of Public Safety, John Harrington.

Meanwhile, Chauvin’s wife, Kellie Chauvin said she has filed for a divorce from her marriage of ten years to the embattled former officer, NBC News reported

According to her lawyer, Kellie who has no children from her current marriage cited safety and privacy reason for the divorce. ”

I spoke with Kellie Chauvin and her family. She is devastated by Mr. Floyd’s death and her utmost sympathy lies with his family, with his loved ones and

with everyone who is grieving this tragedy.

She has filed for dissolution of her marriage to Derek Chauvin,” Chauvin’s attorney said.

Breaking: Oshiomhole, Secondus and others hold meeting with INEC ahead of Edo, Ondo poll