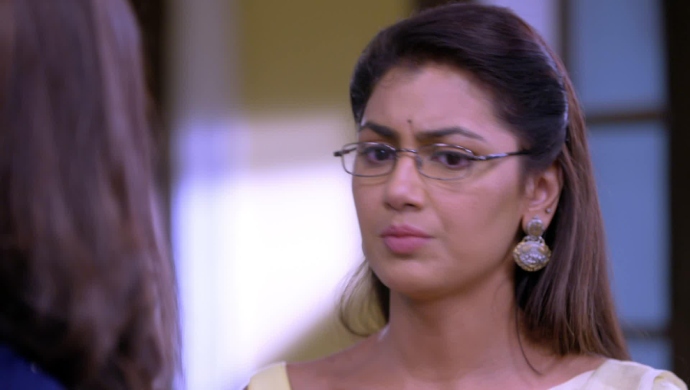 Twist of Fate 2 July 2020 Update starts as Pragya thanks Abhi for uniting Purab and Bulbul. He says he did it for Aaliya as she loves Purab and Purab loves Bulbul, until he marries Bulbul, Aaliya will be behind him and will ruin her life. She says he does not look good serious. He says he is better than her who is unromantic. She says she can be anything but not unromantic. He pins her to the corner and tries to kiss her and she reciprocates, but he stops and asks how will she propose her, to imagine as he is her boyfriend and prove she is romantic.

He asks if he is ugly that he cannot be her boyfriend. She says not like that. He says he can propose anyone anytime and says that is the difference between them, he is a rockstar and he is a worried teacher. He says he will give her 2 days to prepare herself to propose him, if she proposes him, he will change her name from chashmish and give a new name, says she should work hard as it is not easy to impress rockstar. He goes near her lips again and she closes her eyes again, but he blows air and leaves, leaving her lurching for kiss.

Abhi discusses about Bulbul and Purab’s marriage with Sarla’s family. Purbi says their marriage hall is still sealed. Purab says he will marry in temple. Abhi says he is like his younger brother and will arrange his marriage at his house. Pragya says what about Aaliya. He says she will understand. Sarla says how can she allow her younger daughter’s marriage at her elder daughter’s house. He asks her to stop thinking all this and says if she does not agree, he will take supreme court/daadi’s permission and she will get angry on her.

Sarla says no need to trouble daadi as she is ill. Abhi says then she should agree to his terms. Aaliya calls Abhi and asks if he called her. He says yes, but she did not pick his call and says he will come home and explain. Aaliya thinks she was unnecessarily angrily on Abhi for slapping her, he is getting her the best gift in life/Purab.

Bulbul gets into room and gets shy. Pragya who is already in taunts her and shyingly hugs her. Pragya says she looks good shying. She says she is feeling blessed and it is all because of her and Jiju. Purab comes there and opens door. Pragya asks him to say whatever he wants to soon, else she will come back and leaves. Purab hugs her and she also reciprocates and smiles. Ishq kare so rab hi jaane….song plays in the background. Pragya guards outside room. Sarla comes and asks where is Purab.

Pragya loudly says Bulbul that her jijaji has come. She runs out from another door and comes there. Purab comes from another door. Abhi says Sarla that he will leave now and walks out with Pragya. Sarla gives Purab shagun. He says how can he accept it. She says it is a ritual and asks Bulbul to get something for Purab. She says she will never cook for him. He says he will prepare then and asks if she will see that. She runs into kitchen to get him something.

Abhi in car thinks how to convince Aaliya. He sees Pragya smiling and asks if she has taken his words seriously and says he was just joking and says we both can walk together like a railway track, but not unite, praises himself that he is brilliant and asks her to continue her rehearsal of proposing her. She thinks though we cannot unite, we will be like a railway track as he said and reach our destiny.

Abhi gets into house with Pragya. Aaliya happily hugs and thanks him. Abhi asks what did he do. Tanu says they know that he met Purab and fixed Aaliya and Purab’s marriage. Abhi is shocked to hear that. Tanu calls all family memebers. Tauji and Taiji come and say Abhi that he fulfilled his responsibility as a brother. Akash asks which event management company to hire. Tanu suggests some name. Mitali suggests they should hire a music director also. Aaliya says she will decide with Purab and says he must be out and will go and talk to him. Abhi says she should not meet Purab. She asks why. He says because her marriage is not fixed with Purab.

Abhi says that he has fixed Purab’s marriage with Bulbul and not her. Aaliya feels devastated hearing that. Tanu asks what is he telling, if he is not worried about Aaliya. He says he tried to contact her before taking the decision, but she did not pick call. He says if Aaliya marries Purab, she cannot be happy with him, so it is better Purab marries Bulbul. Aaliya strangulates Pragya and says she has done this. Pragya tries to explain, but she slaps her and says she is taking revenge for making her MMS. Abhi intervenes and tries to stop her, but she gets hyper. He gives her a tight slap, which she deserved many times. Mitali and other puppets of Aaliya are shocked to see that.

Purab takes Bulbul out and asks if she loves him or not. She asks what. He says she gave weird reasons before to save Pragya’s marriage and now that Abhi has approved their marriage, he wants to know if she loves him. She says she will not tel it so easily. He gets a rose, pin her to a tree and gets rose closer to her lips. Bulbul gets shy and says people are watching. He says let them be. She says Sarla is coming. He gets conscious. She runs from there and says he will not get her easily. He says he will wait with his rose. She says let us see and runs from there smiling.

Abhi says Aaliya that Pragya is not behind this decision and it is his sole decision. Aaliya says she is not a child to accept whatever he says. She says he is wife’s puppet and does whatever she says. He asks what happened to her. She says it is Pragya’s plan to trap daadi first and then him to stay in this house and even wants to get her sister here. He asks what happened to her. She says when he has given her sister’s happiness to Pragya’s sister, how can she be happy, so she will kill her. Abhi stops her and says if she even touches Pragya, he will forget that she is his sister and will break their relationship. Aaliya’s puppets are shocked to hear that.

Aaliya locks herself into her room, reminisces Abhi slapping her and throws things on floor. Tanu knocks door.

Abhi asks Daadi if he did right. She says he took right decision even without her and says even she wanted everyone to be happy, now she is sure he and Pragya can live without her help. Abhi says Aaliya thinks him as her enemy and he cannot tolerate that. Daadi says Aaliya is very arrogant and once her anger calms down, she will realize it. Abhi thanks her and says after speaking to her, he feels he took right decision.

Abhi asks Pragya not to worry and not to inform her family as he does not want them to get tensed. She says she is worried about Aaliya as she cannot see her brother thinking of someone else’s happiness than her. He says he knows his sister well and knows how to calm her down. He says to calm Aaliya’s madness, they will have to get Purab and Bulbul married in this house so that Aaliya should realize that Purab has moved out. He says he will have to meet Purab now and leaves.

Bulbul reminisces Purab telling he will wait with rose until she proposes and smiles. Sarla comes and apologizes her for doubting her and thinking she is against Pragya, but whatever was going in Pragya’s life, she thought everyone is her enemy. Bulbul says whatever has happened is for good and she is happy that she has accepted her and Purab’s relationship.

Tanu congratulates Pragya and says whatever she tries, Bulbul’s marriage with Purab will not happen. Pragya asks her to get out of her way as she wants to meet Aaliya. Tanu says she will not meet you and says if anything happens to her, Abhi will not leave her. Pragya pushes her and leaves.

Twist of Fate 2 July 2020 Update ends with Aaliya imaging Bulbul and Purab hugging in mirror and breaks it. Pragya comes there, knocks door and asks her to open door. Aaliya calls Bulbul and says she cannot attend her marriage, but can send her marriage gift. Bulbul asks what gift. Aaliya takes mirror piece and cuts her wrist thinking now Abhi will realize what he did, he killed his sister for Pragya and her sister’s sake, once she dies, Abhi will hate Pragya and Bulbul and will not support marriage.