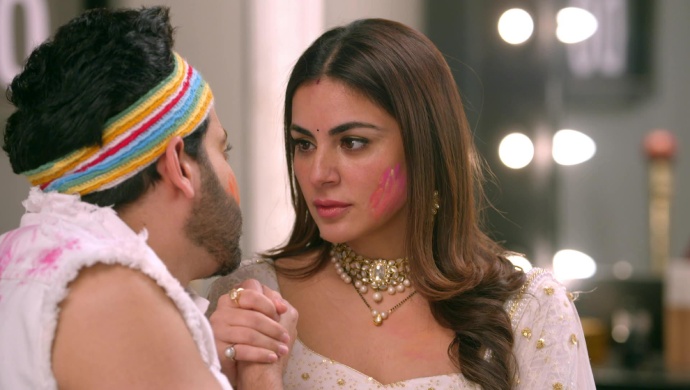 Kundali Bhagya 31 July 2020 Written Update starts with Sherlin coming to appreciate Mahira. Mahira was ready and thanks Sherlin for the compliment. Sherlin says it wasn’t a compliment on her looks, but her ability to convince Karan. He never goes against Rishab but today he fought Rishab; he is desperate to marry her.

Mahira was happy and excited. Sherlin discusses that they must stop Preeta from coming to the wedding. Mahira says she was extremely tensed, then she thought and she figured that Karan hates Preeta right now, so they must let Preeta be here. Sherlin corrects that Karan and Preeta love each other a lot.

Mahira disagrees. She fancies being Mrs. Karan Luthra today and awaits to see herself as Karan’s wife; and Preeta’s heartbreak. Sherlin says she never saw someone as clever as Mahira. Mahira sends Sherlin as she needs to get ready.

Rishab stood in the window, upset about Karan’s hatred for Preeta. Rakhi comes to Rishab asking if he spoke to Karan about giving another chance to Preeta. Rishab says he spoke to Karan, but Karan does not understand anything he or Preeta say. It seems he is not their Karan, but someone else. Rakhi tells Rishab she sent him to speak to Karan, but Rishab is the one Karan loves the most. He must have silenced her, saying he was hurt; but she thought Rishab would convince him.

Rishab says Karan does not understand anything; his mind is not in control. They will speak to him later about Preeta. He might misbehave with Preeta even more. He tends to hurt Preeta even more. Rishab asks Rakhi why Preeta would be hurt by being in Karan’s wedding; Preeta must as well hate Karan like he does. Rakhi says Preeta would never hate Karan or misbehave like he does. Sanjana comes upstairs to take them downstairs as the guests have arrived.

Sanjana, Sherlin, Dadi and the family dance and celebrate the wedding. Karan comes to the hall in groom’s red attire. He silently thinks Preeta Arora hasn’t yet arrived. He awaits Preeta silently. Sherlin and Preeta arrive at the wedding. Karan and Preeta have a silent conversation. He says, ‘Here you are”. She replies ‘She had to come, to show that he matters nothing to her anymore’.

Karan asks, ‘Why is she still outside then’. Preeta replies, ‘She doesn’t feel like coming inside, but she will’. Karan says, ‘He will show her right place today, Preeta Arora is most welcome’.

Everyone stops dancing. Karan walks to Preeta, holds her hand and drags her inside. He rolls her in vigorous and harsh dance moves. Preeta was irritated. She tries to get away, but Karan pulls her closer, physically clutching her arm. Rishab tries to stop Karan but he stares at him, continuing his dance with Preeta. He bends holding Preeta in his arms. Rakhi comes to Karan and Rishab intervenes. Karan tells Rishab not to interfere. Rishab strictly tells Karan, not anymore.

Karan calls Masooma for reception. Masooma goes inside. Karan stops Rakhi along him.

Inside, Shrishti looks for any bruises on Preeta’s hand. Preeta says she is absolutely fine. Shrishti was offended why she always covers Karan’s mistakes up. Preeta says Karan was actually dancing, only his body language was offensive. She defends that Karan’s brain is just like a small child, he is irritated right now because things aren’t according to him. Soon, this wedding will be over. Life would move on, and all of the memories will be left right here.

Shrishti was angry that Karan manhandled her, she is hurt and still covering up. Preeta tells Shrishti Karan Luthra isn’t as important for her as to make her tensed. She asks Shrishti to come and attend the wedding rituals.

Masooma comes with aarti thaal and welcomes Karan Luthra to his own wedding. Karan stops by Preeta, giving a vengeful stare. He asks Masooma about Mahira, as he is eager to marry his wife. Preeta openly smiles. Karan moves on.

Kundali Bhagya 31 July 2020 Written Update ends as Karan was seated in the Mandap. Rakhi stops Rishab from leaving the hall. Kareena goes to Preeta and takes her inside. Sherlin was happy at Preeta’s maltreatment by Kareena. Today, Kareena would give her enough lecture.