Jodha Akbar 12 August 2020 Update starts as doctor tells jodha and hamida that javeda says is truly becoming mother, hamida gets happy and says I wish maham was here to listen this news, I hope she is in peace.

Jodha and ruks sit in palanquin, ruks ask jodha is she fine? jodha says no and my problem is you because you take so much care of me, ruks says who said that I am taking care of you? I am taking care of child, ruks says I am given your responsibility by jalal, he wasn’t allowing me to take you out, I had to insist.

Jalal is practicing sword fighting, he is practicing in full energy, one soldier is observing jalal very closely, jalal ask soldiers to come in group for his practice, solider says I wont come in group as I am not common, jalal says you have proud of your power? soldier says no I believe in my power, test me, jalal ask soldier to come and fight with him, they both start fighting one o one, jalal takes charge in fight and makes soldier fall on ground, soldier’s sword is thrown away, soldier says to jalal that you are a king so is hiding behind your weapon.

Jalal says I don’t kill person who is empty handed, jalal throws his sword away too, they start fighting with hands, jalal gets hold of soldier and grabs him, after fight, jalal praises the soldier and ask his name, soldier says I am a rajvanshi, jalal says then why you work for a Mughal king? don’t your brothers taunt you for working as a soldier for a Mughal?

Soldier says you are a Mughal king but you are obedient to your people, you work for their betterment and is not biased with any rajvanshi, you treat whole nation as one so we rajvanshi feel proud to work for a king like you, jalal says like you are a good warrior, you have nice thoughts that your power, he says I need soldiers like you, he ask maan to send this soldier to a state where riots have started, jalal says to soldier that I used to hate rajvanshies but now I think that I have relation with rajvanshies for life.

Todar and jalal are discussing about corruption, todar says we cant eliminate it as its being distributed from upper level to lower level, all ministers and shop keepers are involved in raising the price of goods, they are taking much money from common man, jalal says I have to solve this matter before I get busy with jodha, todar says we have to go to market to see things with our own, jalal agrees.

Jodha’s dadisa is looking at sky which is all dark and cloudy, bharmal comes and ask what are you thinking, dadi says I don’t know, look at sky it is showing that darkness is coming in life, I am worried for jodha, she is being cursed, I am tensed for her safety, bharmal says you don’t worry, only good happens to good people, jodha is fine, dadi says no I am not feeling comfortable and only shaguni bai can solve my problem.
doctor checks jodha.

Ruks ask doctor is jodha all fine? ruks gets restless, doctor says she is absolutely fine, jodha jokes that doctor give some medicine to ruks that she stops taking tension because of me, doctor says to jodha that be happy from heart, do what you want and do not for what you don’t want, doctor gives one medicine to ruks and ask her to give this to jodha daily, ruks ask to estimate when will children born? doctor says I can only predict that in one month, children will be born.

Jalal and todar comes to market in disguise to see the high prices to things, jalal ask one shopkeeper why is he taking more money then defined money from king, shop keeper says we take our commission, you should thank god that adham is not alive otherwise things would have been trice the price now, jalal ask did he gave much problem to you all?

Shopkeeper says yes, you know one shopkeeper denied to follow his order so adham kidnapped his daughter then shopkeeper had to give money to adham, adham did give his daughter back to him but now daughtercant even utter a word, don’t know what adham did to her, jalal is distraught, suddenly the winds start blowing heavily, thunder comes, its raining heavily.

Its raining heavily, jodha and ruks are going in palanquins from jungle.. , ruks ask jodha is she fine? jodha says don’t worry I am fine, ruks says palace is going to come soon, be calm.

Jalal and todar come in one shop to take the shelter from thunder, jalal says I am worried for jodha, todar says don’t worry, they haven’t gone much far, they would have comeback by now, they see one man drunk and tying a knot around his neck to suicide, man says to others that I am tired of all this, that person have made my life hell, I am not able to do anything as he destroyed my life, jalal comes and ask the drunk man who destroyed his life, man says king jalal, jalal is stunned.

Dadi comes to shaguni bai, shaguni says wow amer’s queen has come, dadi says I came here not a queen but as dadi of jodha, I am worried for. otherside jodha’s palanquin is unbalancing in thunder. shaguni bai says to dadi that I knew it that you will come to me, dadi says when you know everything then tell me the way to come out of maham’s curse, shaguni says there is no way to come out of maham’s cure.

Jodha Akbar 12 August 2020 Update ends as Shaguni bai says to jodha’s dadi that what has written in fate, I will happen, nor me neither can jodha stop it, this curse will show its effect, nobody can stop which has to happen. otherside jodha’s palanquin is going through difficult way, suddenly because of strong winds, palanquin gets tilted, jodha falls out of palanquin and is thrown in jungle, she is hurt. ruks shout for her. 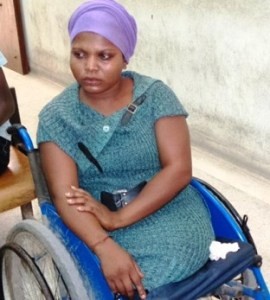 Kenyan woman narrates how she was gang-raped, stabbed by her ex-boyfriend and his friend

Sexy! 63-year-old grandma with the face, body of an 18-year-old girl (photos)