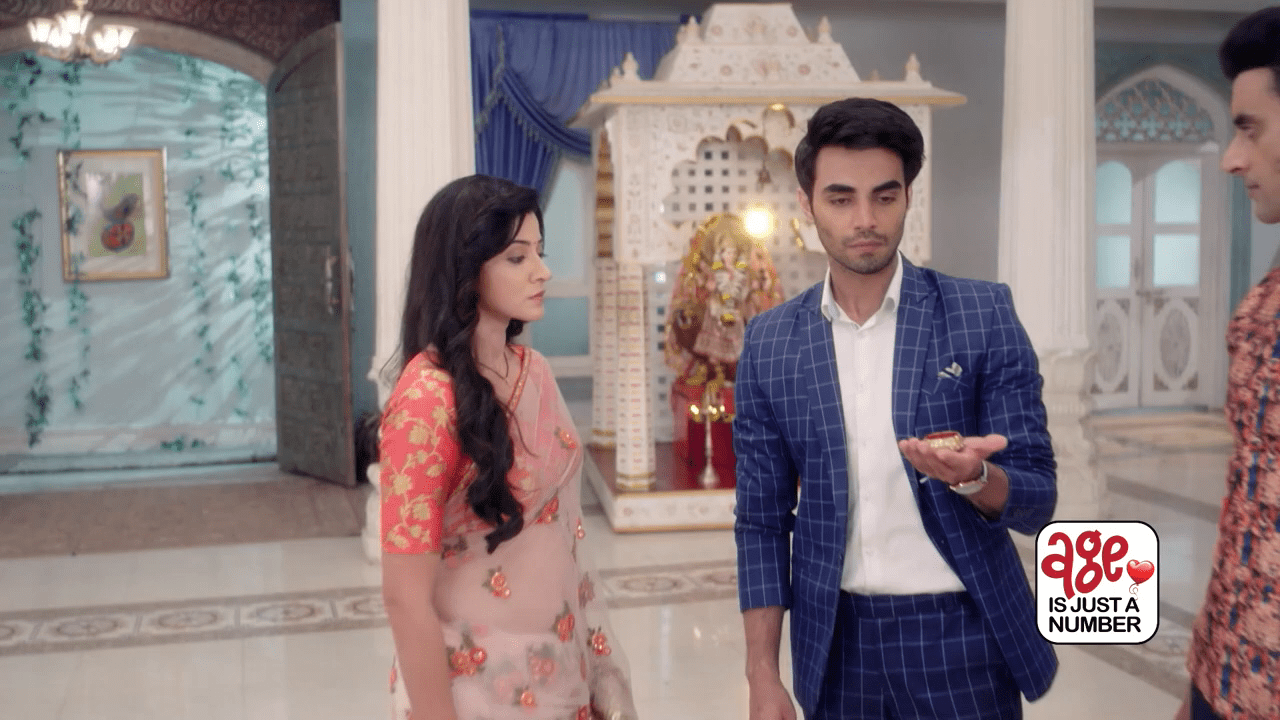 Age is Just a Number 16 September 2020 Update starts as Vaidika at once realizes Sahil stood at her room’s door and straightens up. Sahil at once apologizes as he must not have come to her room. Vaidika stops Sahil. He withdraws his hand from her grip. He clarifies to Vaidika that he isn’t Sahil, his mummy told her he is Sahil’s twin brother. He is extremely sorry for not being able to control himself, but he never intended to come to her room. Sahil turns to see Vaidika crying but walks away. Vaidika thinks she can’t fell weak and must get her Sahil back anyway.

Usha watch the jewelry, she says she knew Bimla was extremely ruthless and couldn’t be trusted at all; now this whole treasure belongs to her son Jackie now. Nani comes there and hushes Usha out of the room with her broomstick. She and Bari Amma hold hands against Usha.Vaidika dresses up Ved for school. Ved insists to wear it from his Papa. Sahil comes to the room while Vaidika was convincing Ved that Papa is busy.

Ved runs into Sahil’s arms. Vaidika watch Sahil dressing up Ved for school. He says Ved is now ready for school, and tells him to go downstairs; today Aarya will drop him to school. Ved runs downstairs. Sahil backs up and was about to step over Vaidika when she supports him with her arm. They share an eye lock, Vaidika was hopeful while Sahil was at once apologetic. He says he wants to speak to her, he doesn’t understand what’s happening to him. He is completely attracted to her and wonders why he feels so helpless in front of her. He was unable to sleep last night and continued thinking about her only. Vaidika says his heart knows what their relation is. When the emotions are so intense it doesn’t matter if a man is attracted to any woman. There is a difference between their age, but does it matter to him?

Usha comes to take Vaidika out of the room. Outside in the hall, Usha shouts at everyone to gather around. Jackie comes in defense. Usha blames Vaidika for flirting with her son. Vaidika warns Usha not to speak another word. Usha says it’s her son who allowed Vaidika to live in the house. Nani charges over Usha with her sandal but Vaidika stop her.

Bhoomi steps ahead to slap Vaidika for deterring Usha, but Sahil holds her hand in mid-air forbidding Bhoomi to even dare touch her. Usha asks Jackie what he is doing, if he believes this woman and not his mummy. Sahil interrupts and clarifies that Vaidika ji won’t leave this house. Firstly, she is pregnant and as a mother Usha must understand this, secondly he went into her room by himself to speak to her. It was Usha who blamed her and dragged her out of the room.

Nani whispers to Bari Amma that he is Sahil’s twin brother but got the heart of Sahil.Sahil clarifies to his family that Vaidika has no connection with any of the accusations. He feels Vaidika has a kind heart, and no one must abuse her character until he is around. He makes Bhoomi and Usha apologize Vaidika. Usha was crying, Bhoomi tells Sahil he shouldn’t have said this to his mummy. Sahil clarifies that Bhoomi is a women, if she can’t respect another woman then he also doesn’t respect her. Usha signals Bhoomi.

Bhoomi accepts her mistake, then joins hands in front of Vaidika. She says it’s her engagement today, and she misunderstood that Vaidika wish to ruin her festivity. She place her hand over Sahil’s to make him up. Sahil withdraws his hand from her grip and leaves. Others also turn to get ready for the engagement.

Vaidika stops Usha by clutching her arm and asks if she has witnessed enough? No matter how much they try, they can’t change Sahil’s heart. His heart is filled with love for Vaidika, Sahil himself can’t get rid of this love. She challenge Usha that she will never succeed in her real intention.Aarya comes to meet an old friend in a café. She was excited for her friend’s marriage?

They enjoy watching photos of her fiancé. Two girls come there recognizing Aarya as Puneesh’s wife; and recalls her affair with Tushar as well. Aarya was irked and about to slap one of the girl. Guddu intervenes.Vaidika asks Usha if she is mourning for Jackie’s death. She doesn’t feel anything for Jackie instead she was afraid to lose the luxurious life. She believed so easily that Jackie is dead; though she must have left her and Sahil find Jackie.

Usha says she has found her Jackie, and this guy will get her whatever her own son would have. Guddu defends Aarya as she only married Puneesh to save her family, and her mother is proud of her. He sends the girls away. Aarya asks Guddu how he knew about her. Guddu replies that it’s because of her Nani. He hurries Aarya home as it’s his brother’s engagement. Aarya wish her mother is fine.

Deepak lay in Bari Amma’s feet to apologize her and requested some place in the house. Vaidika says he was punished well in jail and even Gauri forgave him. Bari Amma accepts Deepak’s apology. Nani comes from behind with a bag of vegetable and tells Deepak to go and slice them in the kitchen as the cook is on leave. Bari Amma agrees to Nani at which Deepak was shocked. Deepak hits Mandabini in the corridor. Both share an intense eye lock. They introduce each other.

Vaidika returns home where women right activists were waiting already. The ladies accuse that Vaidika always flirt with young men, when her husband was dead she went towards his twin brother. Bhoomi whispers to Usha that she has instructed these women well, they will take Vaidika out of the house till the engagement. The ladies force Vaidika out of the house but Vaidika defends herself well and shouts who are they to decide for her good or bad. She married a man younger than herself but what’s wrong with this. Sahil came home and defends Vaidika sending the activists away. Sahil appreciates Vaidika’s take against these women. Vaidika was happy and says the victory has yet begun.

Usha takes Jackie to get ready for engagement. When alone, Vaidika tells Sahil that Sahil was really proud of her today, and she need not take any further steps. She is sure Sahil won’t get engaged to her.

In the room, Sahil asks Usha to give him some time, he had a major accident and doesn’t remember well what he is doing. He doesn’t know Bhoomi well, but in these days no one marries a stranger. Usha says she knows Bhoomi well, she is his mummy and brought him home from a heap of trash even when he hadn’t opened his eyes. She wants the best for his future.

In the engagement party, everyone waited for Jackie. Sahil appears from the stairs walking downstairs. Usha boasts about her son and goes to pose besides Sahil. Sahil looks towards Vaidika. Vaidika recalls all the past times when Sahil had proposed her for marriage.

Everyone in the family complement Jackie and congratulate Bhoomi. Sahil couldn’t take his eyes off Vaidika. Bhoomi was about to put on the engagement ring in Sahil’s finger. Vaidika leaves the hall. Soon, the lights of the hall go off.

Age is Just a Number 16 September 2020 Update ends as Vaidika appears with a microphone and announces it’s the engagement of son of the house. She will sing today, for Bhoomi and Jackie.

Related Topics:Age is Just a Number