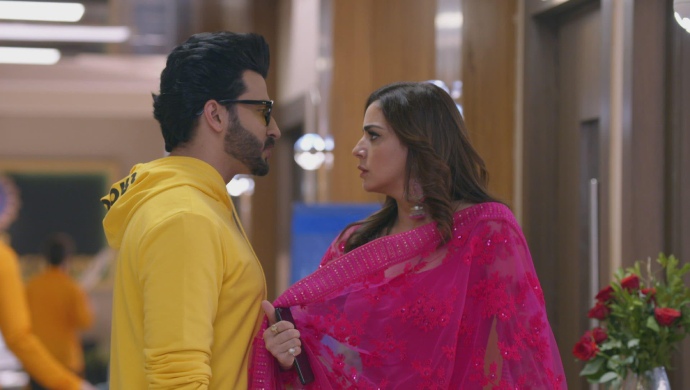 Kundali Bhagya 21 September 2020 Update starts as Preeta exclaims that they both are getting mad as it is visible from their faces, they are thinking of how the dish made by her was sweet as they both had added a lot of spices in it, they must not think a lot as they can never understand, Preeta answers that when she came back from talking to her mother and she went to get the bowls with Sherlin.

Preeta came to realize what they had done so she also mixed salt in their dish and corrected her own bowl, she exclaims that how did she like what she has done to them, Maira asks then how was she able to do it as they had ruined her dish, Preeta answers that when they are people like her living in the house, there always has to be two ways from which they can fulfil the task.
Preeta mentions that now she is the wife of Karan Luthra and will not stay quiet by their attacks as she ahs come to understand their attentions, she explains that she made a separate batch of the dish which she had kept aside, she answers that the family members loved her dish and no one dared to eat her including Karina, she mentions that even Sherlin did not taste the dish.

Preeta warns her to stop from her childish acts as otherwise she might have to leave the house. She also warns Sherlin to stop as she will surely get payback for any wrongdoings which she tries to perform, then mentions that she is like the person who would fight with them for the rights then also explains that they should eat the dish as she was the one to make it.

Everyone is sitting, Karina mentions that it is not a good idea as they should not do it, Dadi however agrees with Rakhi then Kartika mentions that she is going to stand with Karina as the situation is not right in their house so it should not be accepted, Karan also refuses saying that they all are old rituals and while leaving sneezes, he orders Ganesh to bring some cold drinks for him, when he is trying to leave Preeta stops him explaining that Karan is ill, Karina however asks her to stay in her limits as if Karan desires the drinks he should get them.

Dadi says that they are going to arrange her reception as Rakhi wanted it. Rakhi then says that they would hold both the functions the same day as it would prevent them from arranges the functions, Rakhi and Dadi leave to take care of the arrangements.

Rishab calls Sherlin explaining that she also wanted a sister in law but now she has got one so she should make sure that Preeta gets the respect which she deserves as this is what he expects from her before leaving, Preeta thinks that they both have gotten extremely angry even when she has not done anything till now.

Sherlin reaches the room where Maira is sitting, she starts yelling explaining that Preeta ahs challenged her saying that she will do something to her but that she has not done anything till now, Maira without refusing to listen to her says that Preeta is not Luthra but is an Aurora and she is adamant to do anything that she can to ruin the life of Preeta, then she refuses to listen to anything and yells at her after which she leaves.

Sameer calls Shrishti, she runs to her phone and answering it says that t is off Sameer, he explains that they have planned, Shrishti gets excited however Sameer says that he just wanted to inform them, Shrishti gets angry saying that they should have invited them as Preeta is her sister so she has the right, Sarla tries to calm her down mentioning that it is nothing to be angry about.

Kartika asks Dadi if she has gotten tired, Rishab comes mentioning that he was amazed because of what she did as he knows that his mother is of the religious end but she took her side, Dadi answers that she knows what Rakhi is capable off as she has done a lot for the family, Rishab asks if Kartika is calling Dadi old but she clarifies that she meant her old mentality and was not calling her old.

Karina also comes explaining that she could never have run the house like Rakhi as with her temperament it would have been impossible. Dadi calls Rakhi asking her to tell everyone what she would like to do on her birthday, then Dadi asks Karina to tell them what Rakhi would do on her birthday, they all joke mentioning that she would like to perform a Yatra.

Kundali Bhagya 21 September 2020 Update ends as Karan comes asking why did Ganesh not bring him the cold drink, he answers that Preeta ordered him however Kartika responds that he should stop listening to Preeta and follow their orders.